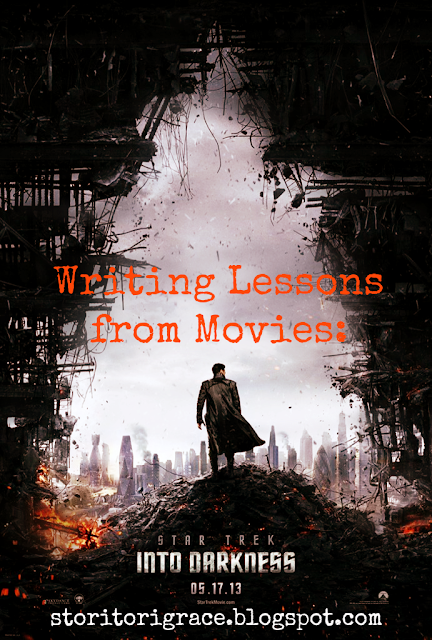 I've been a Trekkie for a long time. I watched the original show and the movies back in my teens and despite the corniness I really enjoyed the imagination and characters of the show. Years later when the remakes release, I was so excited and I loved the new cast with better effects and acting. They picked all of the actors perfectly. Though the first movie is very good, I am a bit partial to the second (and it's not just because of Benedict Cumberbatch though he is a better villain than Nero, but I digress). I recently rewatched it and it rekindled my love for the film and inspired me to write this post. With the new Stark Trek film releasing next month, I thought it a good time for this!

1.) Conflict of Personalities - The crew of the Starship Enterprise is a very diverse one. We have crew members from all of the world: the United States, Russia, Scotland ... and off world: Vulcan. They have diverse skills and personalities that often clash, most pointedly Spock and Kirk do this. They are almost complete opposites of each other. Kirk grew up as a farm boy in Oklahoma and is reckless yet passionate. Spock is half Vulcan and grew up on his planet, and he is logical and restrained. But all of this added a very dynamic subplot as these future good friends are struggling to get along.

2.) Characters Who Learn From One Another - On the flip side of topic, eventually in the film Spock and Kirk learn that perhaps each other's ways of thinking are the best approach. Spock takes the emotional approach saves Kahn's people yet uses the torpedoes they were stored in to attack, and Kirk takes the emotionless approach and sacrifices himself for the crew. Sometimes the other's way is best.

How this can be applied to writing: Having characters learn from one another is a logical thing and can create some interesting dynamics like what happen in Into Darkness. What are your characters strengths compared to each other?

3.) A Villain With Loved Ones - It's easy to forget that villains are people too. Despite Kahn's brutality and cunning, he is still a man with a family and friends. Kahn cares very much about his people to the point that Marcus could use them to manipulate him. Ultimately, Kahn's goal was to free the ones he hold's dear. Talking about them even brought tears to his eyes.

How this can be applied to writing: Your villain wasn't just manifested out of pure evil. Who do they care about? They wife, mother, father, siblings, friends? Who does your villain love or has loved in the past?

4.) Sometimes It Isn't the Death It's the Reaction - Spoiler alert there are two major deaths in this film, one is Captain Pike and one is Captain Kirk (even if it is only temporary). Both of them died brutally, Captain Pike from being shot and Captain Kirk from radiation exposure. But, at least for me, I didn't start getting choked up when they died, I started getting choked up when the characters reacted to their deaths. When Kirk rushes to Pike too late, discovers his beloved mentor has been murdered, he starts whimpering in pain and his face reddens with emotions. This got me.

But it pales in comparison to when Kirk lay dying in the chamber as it decontaminates from radiation and he's uttering his last words to Spock. They put their hands together on the glass in the Vulcan "live long and prosper" symbol, alluding to the previous film, and Kirk says, "You will always be my friend." As soon as Kirk's hand slides to the ground and the life leaves him, emotion overcomes Spock and he screams in rage and pain, "KAHN!" While I'm writing this just thinking of that utter agony, makes me tear up.

How this can be applied to writing: How do your characters react to death? Some cry, some scream, some are in so much shock they don't even process it until later. How your characters react to the death of loved one can hit your readers to the core. When Katniss starts yelling at Buttercup after Prim's death, I start sobbing. When Frodo is screaming for Gandalf  and Boromir has to carry him away after the wizard plummets into the depths of Moria, my eyes water. Keep in mind of your characters' reactions to death.

5.) Attacking Home - At the climax of the film, Kahn crash lands a starship into the Star Fleet academy and decimates the city around it. A chill courses through your bones as you watch the once familiar terrain obliterated. You know deep down that a place you held dear is gone forever. Attacking home made the fight more personal than just a battle in space, it was attacking a place filled with memory for the crew. It hit them hard.

How this can be applied to writing: Attacking home can be a powerful blow to your characters, and it can add a sense of peril and desperation that your readers can relate to. When home is destroyed, it's like there's a hole in your heart. Your sense of stability is lost.  That place you could return to is gone.

Conclusion - J.J. Abrams did a great job making a film that really snags your heart. I hope these pointers help better your writing. Thanks for reading!

Have you seen Star Trek: Into Darkness? Have you noticed these writing aspects? What movies have you noticed have good writing? Let's geek out together!