So Your Character Has These Various Injuries ... 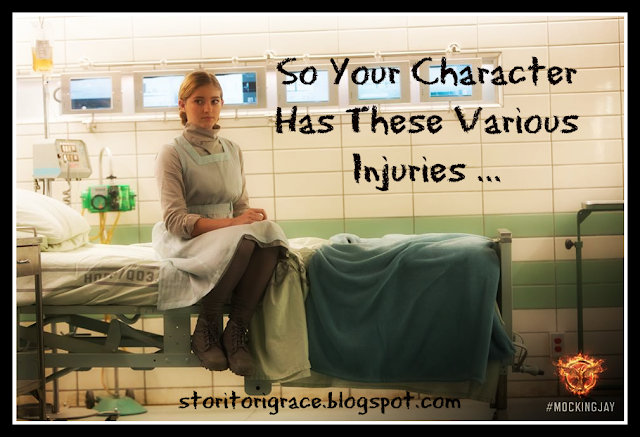 Characters get all sorts of injuries, but we don't always experience these injuries. Nor do we want to many a time. I've gotten some interesting injuries, so I thought I'd make a post about it. Perhaps this can help you out if you have one of your characters with one of these injuries--or give you some plot bunnies on new ways you can hurt your characters.

Warning: I will be showing some slightly graphic images of what these injuries look like. Proceed at your own risk.

What is this? - This is when your skin experiences so much friction that your skin blisters then that blister as well rubs off.

How did I get it? - I was using a sword in Kung Fu and the sword had tape on it. The tape got moist from my sweat which increased the friction against my thumb. Next thing I knew, my thumb was hurting. I looked down and saw what you see in that picture below.

What does it feel like? - It stings like heck. Water even makes it feel like it's on fire. Air makes it sting. It's extremely sensitive. This took a little over a week to heal with the first two days being the worst.


How did I treat this? - As soon as I got the car I put a bandage on it to keep it from being aggravated. I also treated it with an antibiotic ointment and an herbal salve.

What is this? - According to Wikipedia: A bruise, or contusion, is a type of hematoma of tissue[1] in which capillaries and sometimes venules are damaged by trauma, allowing blood to seep, hemorrhage, or extravasate into the surrounding interstitial tissues. Bruises, which do not blanch under pressure, can involve capillaries at the level of skin, subcutaneous tissue, muscle, or bone.

In layman's terms, you hit yourself really hard you break some small veins in your skin which discolors your skin.

How did I get it? - I have two instances where I severely bruised myself. One was when I was in Kung Fu and I was performing a drill with a pad. This pad had a wooden part on one side and I hit this wooden part with my fist full force on my knuckles. The second time, I was in a car accident and I blocked the airbag from hitting my face with my arm.

What does it feel like? - Very sore. It hurt to move my arm or fingers for a couple of days for both. It took the fist bruise about two weeks to heal and the arm bruise about a month to be fully normal again.


How did I treat this? - Lots of ice. The areas swelled so I used ice to get the swelling down and help the pain.

What is this? - Anaphylaxis is a serious allergic reaction that is rapid in onset and may cause death.[1][2] It typically causes more than one of the following: an itchy rash, throat or tongue swelling, shortness of breath, vomiting, lightheadedness, and low blood pressure. These symptoms typically come on over minutes to hours.[3]

Common causes include insect bites and stings, foods, and medications. Other causes include latex exposure and exercise. Additionally cases may occur without an obvious reason.[3] The mechanism involves the release of mediators from certain types of white blood cells triggered by either immunologic or non-immunologic mechanisms.[4] Diagnosis is based on the presenting symptoms and signs after exposure to a potential allergen.[3]

In layman's terms, your body says no to certain things and then throws a tantrum.

How did I get it? - When I was teenager, I experienced this because of a chemical in some pain medications called naproxin. It was in the medication Aleve. I'd taken the pill before, but after a second time I woke up in the middle of the night with my throat feeling sore, so I took a shower. And then my tongue felt too big for my mouth and I started having trouble breathing. I got out of the shower and felt extremely itchy. I turned on the light and saw literally hundreds of hives across my skin that looks like mosquito bites, so many my skin was bumpy.

What does it feel like? - It's terrifying. Your body is reacting completely out of your control and all of it is happening rapidly. You feel extremely itchy and it's tough to breathe.


How did I treat this? - Fortunately, I didn't have to go to the hospital, because my parents had antihistamine. I took a bunch of those and it calmed the symptoms down. 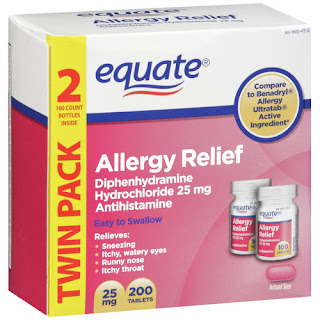 What is this? - This is when a wasp or hornet plants its stinger into your body, injecting a toxin.

How did I get it? - I've been stung by wasps and hornets so many times. They have this vendetta against me. I've been around many groups of people and who do they sting? Me. There's been nests under stairs, in bushes, in corners of buildings, and hornets nest int he ground. And they always come after me.

What does it feel like? - When you're stung it feels like someone took a sewing needle and jabbed it straight in your skin. Over time the sting turns red and swells. With wasp stings, I've had my entire arm or leg swell up so large that I couldn't fit into clothing. The sting throbs and feels very warm.


How did I treat this? - This is the poison, so the thing I focus on the most is drawing out this poison. Baking soda and vinegar is one remedy, also using activated charcoal. I personally go for clay, yes clay. Particularly bentonite clay. I coat this clay on the sting and allow it to dry. The clay sucks out the poison from my bite and it relieves some of the pain and itching. Ice is important as well to get the swelling down.

What is this? - According to wikipedia: Sunburn is a form of radiation burn that affects living tissue, such as skin, that results from an overexposure to ultraviolet (UV) radiation, commonly from the sun. Common symptoms in humans and other animals include red or reddish skin that is hot to the touch, pain, general fatigue, and mild dizziness. An excess of UV radiation can be life-threatening in extreme cases. Exposure of the skin to lesser amounts of UV radiation will often produce a suntan.

How did I get it? - I have extremely sensitive skin. I blame it on my European roots, so I've gotten sunburned on many occasions the worst at the beach as a kid.

What does it feel like? - It's painful to move too much, your skin is very tender, and your body heat is increased. Any further heat on your skin hurts like hot water when showing. You skin can bubble and blister. And your skin starts peeling usually your face first. It typically takes weeks to heal from second degree sunburn. Near the end of it my ruined skin begins to peel off in nasty sheets like a reptile.


How did I treat this? - Cold showers are a huge relief, also cold rags. A big thing is getting your body temperature down. Also aloe vera is important for actually healing the burn. Some people use the gel, but I prefer to use the straight plant. Just slice the spikes and leafy outer layer and rub the stuff directly on the burn. Another thing that can be used is mint oil. This also has a cooling effect, but don't use too much or the oil can get so cold it burns.

What is this? - This is when you get hit so hard part of your tooth comes off or sometimes when you bite hard food this can happen as well.

How did I get it? - I've chipped a tooth twice. Once when I was eating some Tostitos and for some reason my tooth chipped. Go figure. The other time my friend accidentally socked me in the face.

What does it feel like? - It doesn't really hurt, but it feels like part of your mouth isn't right and that's really annoying to me.


How did I treat this? - When I got my tooth chipped the first time I had to have it filed down by the dentist because it was one of my front teeth. The second time it was part of the inside of the tooth and I kinda wore it back to being smooth with rubbing it with my tongue. I'm not saying that's recommended but that's what I did.

How did I get it? - I was a very active child, so I'd run around in the woods and accidentally get it. The past couple of years I've gotten it because my cat is an adventurer and would get it on her then give it to me.

What does it feel like? - Like H-E-Double hockey stick.  Out of all of these injuries this is the one I hate the most. I wouldn't wish this on my worst enemies. The thing about poison ivy is number one that thing about how it can spread is false. It only appears like it's spreading because the poison ivy takes a week to fully show up on your body. You could have been hiking a week ago and then you don't see any symptoms until days later.

It first looks like a cluster of bug bites. Then they start leaking orange nasty ooze. Depending on your severity the nasty "bug bites" can coalesce into one nasty oozing cluster that resembles fine bubble wrap both in appearance and texture. If that sounds horrifying it's because it is. The ooze can be in literally pools of orange slime on the spots.

Also this itches like nothing you've ever experienced it and if you itch it burns. It's also very warm to the touch. This stuff can take up to a month to heal. Even then when I got it really bad my skin had to completely regrow in those areas because the poison destroyed it so much.


How did I treat this? - Calamine lotion does not work. At least it doesn't for me. What I use is again clay. The clay will draw out the poison and relief itching. Mixing it with mint oil will also bring a soothing cooling effect. Also using this herbal salve called critter goop is absolutely amazing. Ice is also important for keeping the swelling down. If you catch the symptoms soon enough you can use preventive soaps from keeping it from getting bad.

Conclusion - Injuries aren't fun, but they can work as great obstacles for your stories. I hope these help you with yours.