Why a Writer Should Travel: Quell Your Fears and Embrace Inspiration 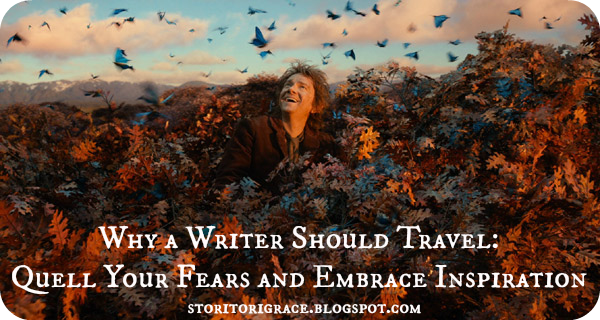 The world is a book, and those who do not travel read only a page.

I have a strong case of Bilbo Baggins-grade wanderlust. I adore traveling. I love going to places I've never been and see what all that place has in store. I've been out of the country twice, soon to be thrice. I've been to ten states. I've traveled to Paris, New York City, Edmonton, Miami, Philadelphia, Banff, and more. I've been as far south as Key Largo, as far north as Alberta, Canada, as far east as Ecouen, France, and as far west in the states as Missouri. I've traveled by plane, bus, car, and train. I've seen mountains so high you can see them from planes, oceans so vast that seem to stretch on into infinity, and caves so deep you don't know how far down they go. And I don't plan to stop there.

All of this is to say that all of these experiences have massively shaped my writing. If I stayed in my little town of Perry, GA that I grew up in my writing would not be the same. I've seen many writers afraid to travel. I'm not talking about not financially able, but afraid to travel. I see many writers afraid to leave their bookworm caves, because it's a big world out there, they're just a little hobbit writer. But this hurts your writing. You're restricted by inexperience. Traveling has so many benefits for a writer and here are five that I believe are the most important.

1.) You're Exposed to Cultures that Differ From Your Own - When we've only known the cultures in our native areas, it's difficult to grasp that people outside of our town, state, region, country think and act differently than we do. When I traveled to France, I was shocked that everyone is so much quieter than the United States, which, as an introvert, was such a relief for me. I didn't know that it's actually rude to not eat everything on your plate in France.

When I was in Canada, there guns are very frowned upon as opposed to here in the deep south where pretty much everyone I know owns a gun. When I was in Banff, Canada, which has a very large Japanese population, it's acceptable to shower nude in the hot springs area, which was very uncomfortable for me, but very acceptable for them since they have community bathing.

Even in different states life is very different than my own. In south Florida there is a very high Hispanic and Latino population. A lot of Miamians are bilingual because many people have migrated from Cuba. In New York City, there are people from all over the world, I heard people speaking French, Arabic, Spanish, and more daily.

If you're writing a story that takes places out of your local area, it's extremely helpful to be exposed to cultures unfamiliar to you. The internet, books, movies, and shows help, but when you're there in person, it creates an entirely new understanding and you know authentically what these places are like. Even if you only travel out of your area once, you can experience "culture shock," which is when you're exposed to cultures that are so vastly different than your own it throws you for a loop. It's a scary sensation, but it's one your characters would experience.

2.) You Experience Settings First Hand - I've grown up in the South and the tallest mountains we have are the Appalachians. While in Alberta, I had the opportunity to visit the Canadian Rockies. On the way there with my friend, her grandmother, and mother, I fell asleep in the backseat. My friend shook me awake and the first thing I saw was mountains so large I couldn't see the tops of them. I had to crane my neck to look out the window to see them entirely. The trees were so much in quantity they looked like moss upon giant rocks. I was in awe. I never knew what mountains were until I saw them. I'd seen mountains of that size on television, but seeing them in person completely change me forever. But now I know how to aptly describe the mountains in my fantasy novels.

Growing up I'd been to Miami, FL and Atlanta, GA fairly often. They are quite large cities with skyscrapers packed with cars. But when I went to New York City, I experienced an entirely different animal. Sensory overload is a good way to put it. There's a different smell on every street: roasted nuts, flowers, fresh paint, garbage. Flashing lights and people of all different colors, shapes, and sizes. Noises everywhere: cars beeping, footsteps, sizzling of hot dogs, talking. It was like no place I had ever been. But now I know how to describe my Prime Dome from my science-fiction novel.

I've experienced the humid heat of Miami, the cold of a Canadian winter, and the temperate climate of a French fall. All of this has helped me to describe settings more realistically for my characters in my books. There's just some sensations that you won't full understand until you've experienced them yourself. The crunch of fresh snow, the smell of the sea, the gentle floating of cherry blossoms on a soft breeze.

Yes, it's scary to go to new environments you've never been to, especially ones opposite to what you're used to. You have to dress differently than normally to adapt to the weather and environment. But the experience you get is priceless. You'll be able to describe when your character is exposed to these settings far more vividly than you ever could before.

3. ) You Eat Foods That Are Out of Your Comfort Zone - While in France, I discovered that they put far less sugar into their food than America does. Their apple pie is far more tart than the classic southern apple pie I'm used to. They also use Nutella like America uses peanut butter, and you eat baguettes all the time.

Canadian food is similar to American but they have chocolate that we don't such as Kinder Surprise and Crunchie Bars. In Miami, there are traditional Spanish treats in every Walmart, Publix, and drug store. In New York City, they sell roasted nuts and hot dogs on the streets everywhere. In west Philadelphia they have a special pizza-like dish called tomato pie that's served at room temperature and absolutely delicious!

Tastes are huge for an environment. Everywhere has such a diversity of food and writing food into your stories adds another dose of realism to your stories. But all of your characters can't eat pizza. New places allow you to try new foods and flavors you never thought your mouth could experience and you can't experience in your area.

4.) You Make Stories of Your Own That You Carry Into Your Writing - At all of the places I've traveled, I've created memories, memories that inspire me and find their way into my stories. The hot springs I experienced in Canada I've put into my Red Hood series. The holograms I saw at a museum with my cousin in New York City helped me increase the realism of the ones in my Subsapien series. The beautiful country side I walked through in France has found its way into my high fantasy series Starbloods. The fear of skiing down a mountain in North Carolina for the first time then the triumph of successfully making it to the bottom I've grafted into my characters. These experiences make my stories more real because they were mine. The memories you create in your travels will do the same.

But you know what? I did those things and I did them successfully and now I have confidence in those things. I have confidence that can travel on a plane on my own. I skied down that slope and it was fun and it turned out that it was a blue slope that my friend tricked me into skiing down. XD Now that I've navigated a New York City subway I can travel any city-wide train.

This confidence has bled into my writing life. I feel braver--like my characters. I traveled on a plane on my own, I can pitch my book. I  skied down a scary slope, I can talk to that marketing director. I traveled a NYC subway, I can enter that contest. When you experience true fear and exhibit true bravery something in you changes.

Conclusion - The first argument I'm going to get in the comments is, "I don't have the money." Yes, that may be the case now, but that may not be the case in the future. Saving up is an option or an opportunity may come your way. I was able to go to France because my church was going on a mission trip there and they helped me raise the funds. Life has so much opportunity. Life experiences are what's going to make your writing more real for your readers, because it was first real for you.

Have you ever traveled? Where have you been? How has it helped your writing? Where do you want to go? Do you need any travel advice? Perhaps I can help!

From Lemons to Book Experiences
The Book of Encouragement
Do You Lack Passion in Your Writing? A Guest Post by Lauren Claire
Write What You Know ... And What You Don't Know
Why You Should Read--and Love It!