Writing Lessons from Movies: The Pirates of the Caribbean: the Curse of the Black Pearl 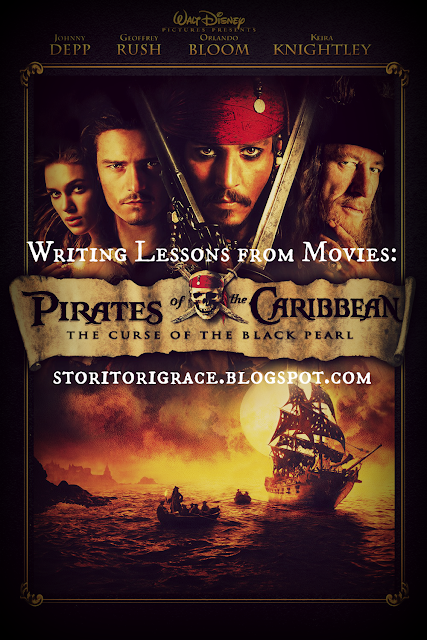 It's crazy to think that the writers of the Pirates of the Caribbean based its main idea from an iconic ride at Disney World. I'd went to this ride way before this movie was made and I was surprised when Disney announced was turning it into a film. Going back just last year, they've upgraded this ride with Jack Sparrow. Now it's become one of Disney's most famous live action franchises.

When I first saw this movie at thirteen, the skeleton pirates scared me to death and I actually had to leave the theater. (Yes, I was a sensitive child.) But now I love this film not just for its jokes and creativity, but for its many good writing points. Out of all of the Pirates of the Caribbean films I stand that this one was the best written.

1.) Miscommunication Used as a Plot Device - The entire reason why Elizabeth Swann is kidnapped is because of one big fat miscommunication. After Elizabeth claims parley, she goes to the pirates' ship to speak to the captain and Captain Barbossa asks her name. In a moment of panic, she claims Will Turner's surname as opposed to her own in fear that if she reveals she's the governor's daughter she might be held for ransom. Unfortunately, she didn't realize that doing this gave hope to the pirates that finally their long curse could end. Meanwhile, the real child of Bill Turner is coming after Elizabeth to save her.

How this applies to writing: Have you thought of using miscommunication to incite a plot? 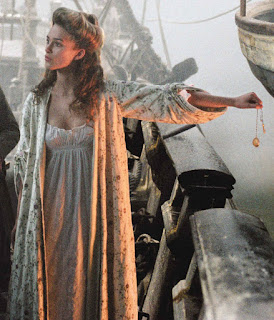 2.) A Well-Designed Curse - As a lover of fantasy, I do enjoy a good curse. I especially love a good curse based in mythos and this one even has a sprinkling of history. The curse Barbossa and his men stumbled upon was based on the famous Conquistador Cortez, a man known for his cruelty and above all greed. The pagan Incan gods cursed this 132 pieces of gold as a penance to anyone who possesses greed like Cortez's. This curse robs pirates of what they want most: pleasure. How fitting is that for pirates? It is steeped in pirate lore and fits the genre perfectly.

3.) Picking the Right Time to Spiel Information - On a general basis, a writer wants to avoid info dumps, but sometimes a little exposition is necessary to explain questions that the audience/readers have been asking throughout the story. When this sort of spiel is well-timed then it makes sense that this information should be conveyed to the characters. It doesn't feel like an info dump. It just feels natural.

This happens several times in this film such as when Barbossa explains the curse to Elizabeth on the Black Pearl. It makes sense that he would tell her what's going on since he expects her to break this curse. Another instance is when Will in the brig asks two of the crew about the fate of Bill Turner. Of course, he'd want to know what happened to his father, so it makes sense that this should be explained to him.

How this applies to writing: How do you handle explaining sessions? 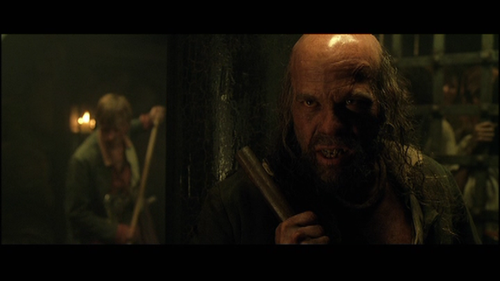 4.) Pointing Out When the Characters Do Something Stupid - Do you ever watch a movie and then get frustrated because a character does something kind of stupid and nobody points it out? I know I have. Yes, people realistically are stupid, but if the main characters do something stupid one too many times it can get annoying faster than Jack can down a bottle of rum. During several instances in this film, the characters point out when another character does something dumb. For example when Elizabeth slips a knife under the table then stabs Barbossa, he says, "So what are you going to be doing now?" Because honestly, she's in the middle of the ocean, she has nowhere to go, but at least we can give her an A for effort.

How this applies to writing: Have you thought of having another character point out a character's mistakes for this reason? 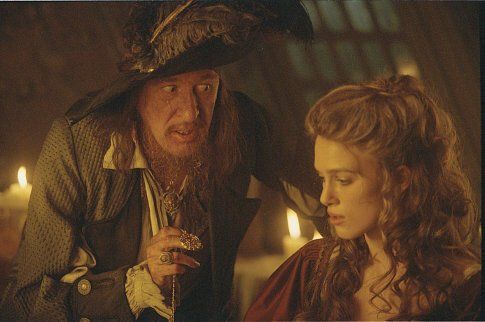 5.) Covering Questions the Audience is Asking - A very on the nose this film does is answer a lot of questions the audience is thinking in their heads by having the characters ask the same things. For example: the two soldiers ask why Norrington isn't doing what Jack Sparrow tells them to do at the Isla de Muerta and Norrington basically says it's because he doesn't trust Jack. Or Will asks Elizabeth why she took his medallion when they were children and Elizabeth says she was afraid they'd think he was a pirate. This also, in turn, answers what Will thought happened to the medallion. He thought he lost it in the wreckage.

Another more subtly answered question was when Jack and Will were stealing the Interceptor and one of the British navy tries to swing to the ship but it's too far of a distance and he falls. This answers the question, "Well why didn't they just swing out over there?" And also when Norrington tries to pursue them he discovers that Jack disabled the rudder system thus answering, "Why didn't they just follow them?" This also eliminates possible plot holes.

How this applies to writing: Have you thought of making sure poignant questions are answered in your story to make sure there aren't any plot holes? 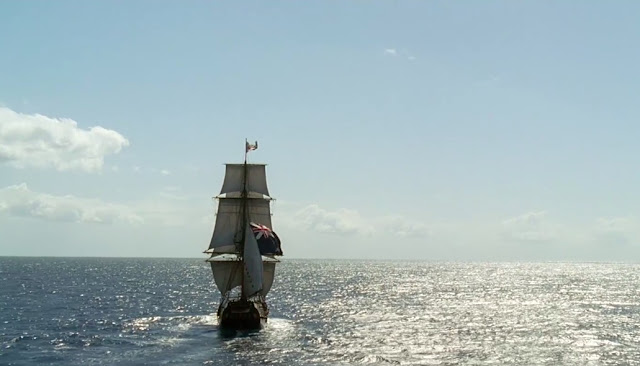 Conclusion - Overall, this movie is a very fun take on pirates, addressing many famous pirate legends. No wonder it's such a hit!