The Plot: The plot’s pretty complex. There’s five point of views and they’re involved in all different facets of the plot from survival to politics to escaping from prison. Almost all of them weave together in the end and I’m sure more extend into the next books. The plot held me to the end, though the book was long (650 pages if you didn’t see up there). There’s a major twist. The ending definitely left on a cliffhanger, though I’m probably not going to continue the series.

The Characters: There’s a diverse range of characters of different genders, ethnicities, and ages. Gavin’s point of view was the most interesting because of his (without spoiling) unique situation, but I grew to dislike him by the end because of what he did to others for selfish reasons. Karis was pretty cool, but I gravitated toward Liv and Kip the most. Kip has a good heart in the end and has a lot of inner strength. All of their abilities are fun and unique. There were a lot of other interesting characters, but there was a lot and I forget a lot of their names. ^ ^'

The Setting: This is the first book I’ve read where the magic system was so complex it was actually overwhelming for me. I commend Weeks for inventing such a complex system, but I didn’t get the hang of it until halfway through the book because it just has so many different facets. You can use all kinds of different colors or sometimes one color or two colors or all the colors and your eyes are different colors. And they’re called polychromes and monochromes and biochromes and prisms and then you can turn bad and become a wight. And all the colors do different things but you can only use the colors if you can see the colors in the scenery or wearing colored glasses and then hellstones aka obsidian and opposite colors can prevent drafting and *holds head *. So. Much. I mean it’s really cool to have colors as power. It’s just a lot to absorb.

Then there’s the whole world. There’s all kinds of people from all kinds of regions and some people hate each other and some don’t and all of this development is good. It just felt like a lot in one book. GoT has a complex world but you kinda ease into different facets per season, so it’s less overwhelming. In The Black Prism it’s all dumped on you and yes it’s important to the plot but gosh it’s still a lot. And I normally love a lot of worldbuilding but this was a lot to absorb. I read a 650-page crash course on this story world.

Epic Things:  My favorite scene of the book was during the Threshing with Kip. During that he sees portrayals of the seven deadly sins and then the opposites of the sins are revealed. I thought that was unique. I actually thought the distortions that the color wights had were interesting, like the one that became completely made out of crystal. I also like that unique weapon were used such as an ataghan.

The Theme:  There were a lot of Christian values displayed and morality, but much of this was in a mire of a very flawed world much like Westeros and Essos.

Content Cautions: There’s so much I’m dividing it into sections.

Violence - Two teenagers are killed with arrows. Soldiers, horses, and innocent villagers are impaled with spears. Lots of corpses. Animal cruelty, including animals being killed needlessly and their body parts flying everywhere. A man is split in half. A mass of headless bodies. A family including a baby die of asphyxiation. Character is shot in the chest. A brutal murder of a woman and her babies being decapitated is described. Horse entrails spilling out. Child abuse. Suicide. Ritualistic murder. Claws splitting a head into thirds. A head popping like a grape. A giant spider decapitating a man. Children are burned a lot. Plus there's a battle scene with lots of gore and bones and blood and mutilation and severed body parts.

Dozens of heads including that of children stacked into a pyramid and preserved with magic. Come on, seriously?

Characters tell another one to “grow a pair” among many other crude sayings such as Orholom's Balls.

Sexual Content - A kid is born out of wedlock. A father pressures his son to make love with a girl. A slave strips for her master and baths with him and then fondles with his man parts. Woman claims another imagines a man tearing off her clothes. Completely naked men and women, one woman having her nipples described. People are stripped naked and talk about female body parts. Mention of rape and a drunk rape is obtusely described. Two people having standing sex in public.

What really bothered me was the fan service things which included Kip’s face between shoved in a woman’s cleavage and Liv’s skirt hikes up and her underwear is pulled down.

Drug and Alcohol Abuse - Kip’s mom along with many others are hard drug abusers, something similar to marijuana called haze.

1.) A Character Dealing with Being Overweight -  Kip is overweight and he's made fun of for being so. He also feels a lot of shame for not having the stamina he would at a healthy weight. This is a struggle for him throughout the book and it was really relatable.

How this can be applied to writing: In YA, girls often talk about their weight, but boys' POVs don't as much, at least from what I've read. I've read one other book that mentioned it, but it's a struggle they deal with too. Also having a character who isn't perfectly thin was refreshing. It isn't healthy to be overweight, but some characters are.

2.) Portraying Mental Illness Before It Was Diagnosed - The character Bas is autistic and he's considered a simpleton by most because that was what it was called before there was an understanding of what autism was. But the nature of the character revealed to me as a modern reader exactly what was going on.

How this can be applied to writing: It's easy to forget that people with learning disabilities existed before the 20th century and it's trick to portray them while being disrespectful. This was a good example.

Conclusion: Basically this was like Game of Thrones with a God-like deity. In GoT there’s a very nihilistic view of religion and the afterlife but in this story world, there is more hope. Just three Inukshuks for this one. 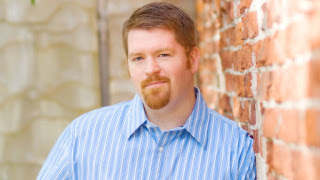 About the Author: Brent Weeks was born and raised in Montana. After getting his paper keys from Hillsdale College, Brent had brief stints walking the earth like Caine from Kung Fu, tending bar, and corrupting the youth. (Not at the same time.) He started writing on bar napkins, then on lesson plans, then full time. Eventually, someone paid him for it. Brent lives in Oregon with his wife, Kristi. He doesn’t own cats or wear a ponytail.
Website//Facebook//Twitter//Goodreads