A Book Review of the Gunslinger by Stephen King 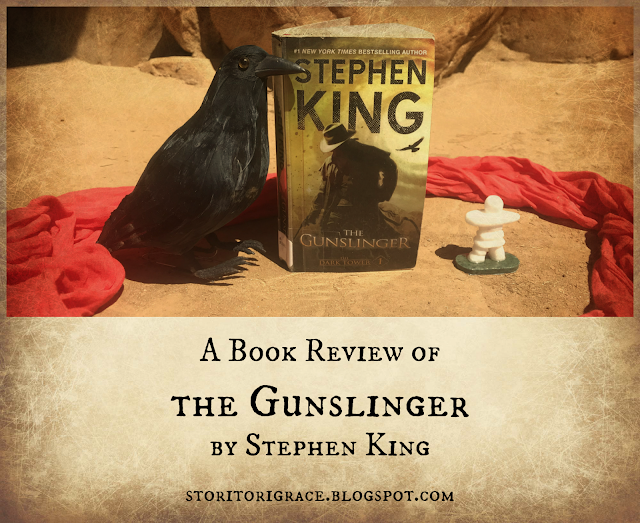 Roland of Gilead: The Last Gunslinger. He is a haunting figure, a loner on a spellbinding journey into good and evil. In his desolate world, which mirrors our own in frightening ways, Roland tracks The Man in Black, encounters an enticing woman named Alice, and begins a friendship with the boy from New York named Jake.

I've wanted to read Stephen King for a long long time, but I'm not a huge fan of horror and that's his primary genre, so I hadn't found a book of his I really wanted to read. When I edited The Dark Tower movie review on GUG a while back, I got really interested in this story, so I decided to give it a shot.


The Plot: I mean there's sort of a plot? The Gunslinger/Roland is supposed to be tracking down the Man in Black, but it seems like he's taking his sweet time to do that. The book meanders a lot with flashbacks and the present is mostly a lot of walking. A lot. Of Walking. Finally, something somewhat interesting happens at the end then it fizzles off. *smacks lips* Yeah.

The Characters: The Gunslinger/Roland is the most interesting character, but I don't really like him much as a person. He's very cold-hearted and according to the back cover copy, he's supposed to be some guardian of light but I didn't know that until 3/4 way through the book, I read the BCC. He sure doesn't act like a good guy. He also whips out this power and knowledge out of nowhere about hypnosis and demon-warding talismans. He's supposed to have been a "manni" which I'm assuming is a priest but that never is explained.

My favorite character had to have been Jake, the boy from another place in time because he had the most mystery surrounding him, but there was no payoff about his story. The Man in Black was an interesting person, but again no payoff in the end about who or what exactly he is.

The Setting: The setting is the most interesting. It's this post-apocalyptic world with mutants, mutated animals, and demons and crazy stuff. There's a lot of interesting existential things hinted about surrounding Jake and the Dark Tower, but I guess all of that is left for other books because it's definitely not fleshed out. The prose is very enrapturing. You definitely feel there in the scene. I'll give the book that.

Epic Things: I liked the talking raven Zoltan. He was amusing.

The Theme: The one quote I really latched onto was, "Time’s the thief of memory." I thought that was profound. Also, the Man in Black mentioned how the size of the universe is infinite and that's intimidating to mankind. I thought that was interesting.

Content Cautions: This is definitely an adult book, so there's a lot of stuff in it. Some of it wasn't graphic per se but often was unnecessary to mention. Like why did King have to write about the Gunslinger's privates moving or tensing or whatever? Um gross.

Of course, there's violence. The most notable instances are a character killing children in self-defense, a bird attack that includes eye-gouging and ripping off an ear, and then that same bird is brutally killed.

Some characters smoke a drug called "devil grass" and at one point the main character takes a drug to up his alertness. He also smokes tobacco regularly.

There's also some spiritual content to take note of. A woman gives a warped sermon, there are demonic presences, a character uses tarot cards, and a villain quotes "Let there be light" which are God's words from Genesis.

1.) Authors That Can Get Away with Bad Writing Because They Have a Big Name - It's actually really offputting when I see a novel and the biggest words on it are the author's name. The company sells books just because that respective writer is famous, doesn't matter if the books are good. It's just because he wrote them. That just doesn't seem right. If this book was turned in to a publisher without King's name behind it, it would be rejected and that's a real disrespect toward struggling authors who don't have a big name that write material way better than this.

How this can be applied to writing: This is just a frustrating aspect of the industry, but that doesn't mean we should slack on our writing. I'm seeing more and more bestselling novels with really good writing. As writers, we should always strive for excellence.

Conclusion: With further research, I've discovered this is the least favorite of the series to fans. I may try out the second book, but this was not a good start to a series.

About the Author: Stephen King is the author of more than fifty books, all of them worldwide bestsellers. His first crime thriller featuring Bill Hodges, MR MERCEDES, won the Edgar Award for best novel and was shortlisted for the CWA Gold Dagger Award. Both MR MERCEDES and END OF WATCH received the Goodreads Choice Award for the Best Mystery and Thriller of 2014 and 2016 respectively.

King co-wrote the bestselling novel Sleeping Beauties with his son Owen King, and many of King's books have been turned into celebrated films and television series including The Shawshank Redemption, Gerald's Game and It.

King was the recipient of America's prestigious 2014 National Medal of Arts and the 2003 National Book Foundation Medal for distinguished contribution to American Letters. In 2007 he also won the Grand Master Award from the Mystery Writers of America. He lives with his wife Tabitha King in Maine.