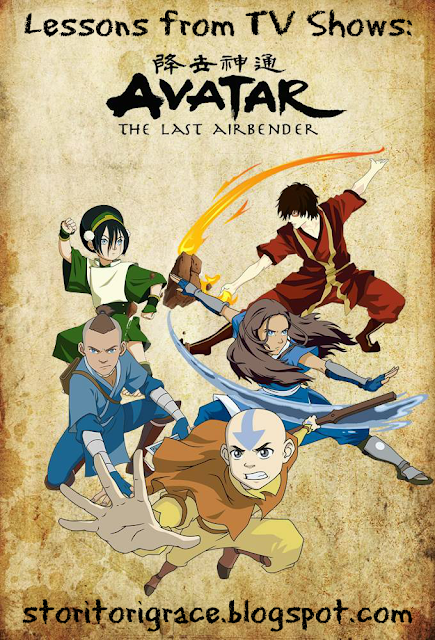 I love Avatar: The Last Airbender. It is my favorite animated show of all time. It began my love for antiheroes, anime, and Kung Fu. Besides Avatar's many fantastic themes and all around epicness, it had many aspects that can gather to better our writing.

Warning: There will be some spoilers along the way.

1.) A Main Goal Carried Throughout the Series - Unlike most shows this one had a goal from the very beginning: learn all four elements, take down the Firelord, and stop the Hundred Year War.

This goal propelled the series, everything the characters did was to reach this point. When you establish a goal at the beginning of the series and have that carry through, you have this inner drive that makes the books, shows, movies, or whatever feel propelled and not like they're ambling off in any direction. They feel more focused and when the heroes finally complete that goal, though the series ends and you're sad, you feel this pristine satisfaction that can only be accomplished by doing this.


How this can be applied to writing: If you intend on writing a series, keep this sort of thing in mind. A goal like this can lace together your stories in a special way that scattered goals or individual book/movie/season goals could not.

2.) The World Building Was Fleshed Out - Avatar's world was so well thought out. Michael Dante DiMartino and Bryan Konietzko created world felt unique and realistic from half and half animals like platypus-bears, turtle-ducks, and badger-moles to the individual kinds of bending to the cultures of each nation and even sub-cultures within each nation. I love how each nation had a different government system. The Air nomads had a council, the Water Tribe is more, well, tribal with a chief, the Earth Kingdom has a monarchy, and the Fire Nation is an empire.


How this can be applied to writing: If you want your fantasy, sci-fi, alien, steampunk, dystopian, etc. world to feel the most real, then make sure to give it a good amount of thought. Think of culture, landscape, fauna, religions, governments, clothing, and more. You don't have to go Tolkien with it, but you need to know what your world is like and in turn you can write a better and believable story. For more help on worldbuilding, I wrote a post all about it.

3.) The Characters Changed in Natural and Powerful Ways- At the beginning of the show, Aang is a goofy kid, Sokka is a sarcastic weakling, Katara is an inexperienced, country girl, and Zuko is a rage-fueled banished prince. By the end of the series Aang is a wise and powerful Avatar, Sokka is a skilled swordsman and tactician, Katara is a graceful, waterbending master, and Zuko has tamed his anger and become merciful and kind Fire Lord.

Unlike characters changing in illogical ways like Daniel from Daniel X, annoying ways like Tris Prior in the novel Insurgent (I love the film and they fixed this problem in it), or not at all or any development erased like Ben Tennyson in Ben 10, these characters grow older as the show progress and blossom in their traits and skills.

How this can be applied to writing: As your story goes, your characters must change and they must change significantly, but without completely forsaking their old self. People change. That is part of being human, but we still keep fragments of ourselves even as we grow from children to adults or from one experience to the next.

4.) The Bad Guys were Legit - In any shows, books, and movies I read/watch, I always look for the villain to show me he/she knows business. If he/sh doesn't, then I don't believe the hero will have that tough of a time defeating this so-called foe. In Avatar, I was convinced from very close to the beginning.

Though Zuko at first seemed a bit like the regular bumbling kiddy baddy, he soon grew to become a formidable opponent and then Admiral (or whatever rank he was in the respective episode) Zhao came into play and he truly made a ruthless villain. But particularly in the third episode of the show convinced me this Fire Nation thing was legit. When Aang goes to his Air Temple home, he discovers the entire Air Nation was obliterated by Fire Lord Sozen.

Furthermore each main villain of the season became more opposing than the next from Zuko to Zhao to Azula to finally Ozai. Each one was powerful and posed a greater threat against our heroes. Though I loved the Legend of Korra (at least until the end), I felt like this was a fail point since, to me at least, Amon was the most intimidating baddie of the show.

How this can be applied to writing: For a bad guy to feel like he's actually a threat to the heroes, he must be driven, he must be human (as in he has motivations besides, "I'm evil." He can be any race you want. ;) ), and he must be powerful either in combat, money, influence, or whatever. These are the key points of a three-dimensional villain and are necessary to make a truly great villain, one that your reader will remember and still fear long after putting down your book. For more about writing villains check out my post How to Write a 3D Villain Part 1 and Part 2.

5.) The Characters Failed Sometimes - To make victory all the sweeter and seem truly hard to achieve then the characters must fail at times, and the characters certainly did in this show, twice majorly, during the coup that overthrew the Earth King that ended up almost killing Aang to Day of Black Sun where the main characters lost almost all of their allies. This showed the bad guys were no picnic to take down. Azula smashed them in both of these instances. This also made you think, "How are they going to possibly win?"

How this can be applied to writing: The ultimate goal of the hero's cannot be easy to achieve. Failure shows that this task is difficult. Having your character fail at one or more of their goals also increases tension in your story and makes it more compelling for the reader

6. ) Most of the Characters of the Series Became Relevant at a Later Time - One of the coolest things about this show is how most of the characters come back into play, especially those from the first and second season. The Mechanist, Tao, Haru, Jet, Smellerbee, Longshot, The Boulder, the Hippo, The Swamp Guys, and more come back into the story and play significant roles that progress the plot.

The Mechanist's inventions help both the allies and the enemies, the The Boulder, the Hippo, and the Swamp Guys becoming allies on Day of Black Sun, and Jet, Smellerbee, and Longshot show up in Ba Sing Se and help unravel a conspiracy. These are all great characters and I love how they are used more than just their most basic purpose.

How this can be applied to writing: Use your ensemble of characters to their fullest potential. Instead of creating new characters off the bat, see how you can use your old ones first. Bring them back later in the series or book. You never know what second uses they can surprise you with.

Avatar: The Last Airbender is a beautiful, well-written show. If you haven't seen it, watch it. If you have, awesome maybe we can do some geeking out together in the comments. All this talking about it makes me want to rewatch the show for the six or seventh time lol. You can learn how to better your writing from almost any source with a story, this show is just one of them.


Have you seen this show? Who's your favorite character? Are there any writing learning points I missed?