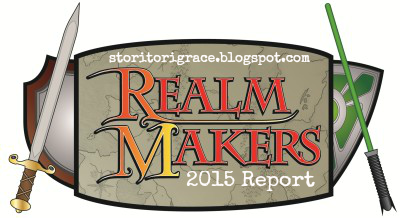 I finally did it. I've done what I promised back in March and branched out from the Florida Christian Writers Conference. It took a lot of courage to step out from my safe zone at FCWC. For six years, that conference has been home. I know so many people who attend yearly and Mr. Bryan Davis has been like our papa bear, but this year with Mr. Davis stepping away from his annual class and on persuasion of Ben Wolf I've attended Realm Makers 2015 in Saint Louis, Missouri.

I got back on Monday and unlike many of the attendees who have typed up posts in a flurry about all the things they loved about the conference, I decided to let a few days pass for all of the events to soak in and let this get a little more personal. At every conference I've attended, there's always been a takeaway. Every one has stimulated a growth spurt in me whether as a writer or as a person. This time I believe I have blossomed more as an adult and a young woman pursuing a tough career.

Last August at about this time, I quit my job at Yogli Mogli. This was a big step for me. Though the job provided me some money, it was also a big stressor. The primary reason I got the job was to please people, to feel less weird--and alone. When I handed in my notice and put all of my chips in for being a writer, my life has started changing for the better. Within weeks, I landed an editing position at Geeks Under Grace and a few months later I won a $200 prize award at FCWC 2015.

But all this time, I've still felt too weird. I work hard at my craft, but I've felt like I haven't worked in the right way because it's not like everyone else. I don't drive to work. I don't work set hours. I don't wake up at 7 a.m. and go to bed at 9 p.m.

At Realm Makers, Robert Liparulo was the keynote speaker and I attended the continuing class taught by David Farland. David Farland is a living legend. He has worked with James Dashner, Stephanie Meyer, and Brandon Sanderson, he has multiple publishing deals, and so much more.

During Farland's classes, he taught so many intriguing insights about writing like about audience and dealing with Hollywood and about being able to make a living as a writer. By the end of the class I believed I can do this, I can do what I love and live off of it. Without a doubt, I know I can do it now.

Even though David Farland's class was beyond amazing, the cream of this conference was Robert Liparulo. I've known about him for years now. I won one of his books a while back at an online conference. Robert opened Realm Makers with a speech about stopping thinking negatively. He mentioned the quote:

"Comparison is the thief of joy." ~Teddy Roosevelt

This struck me hard. I tend to compare myself to authors, authors who are published younger than me, authors who won contests at ten years old, authors who have glowing track records. But like David Farland said in his class, every writer has their own journey. There isn't a set road to publishing. Everyone gets there in different ways.

I had the privilege of talking to Robert several times whether in a formal appointment or really late at night at a party. We talked passionately about our writer journeys and shared some good laughs. At the appointment, I asked him how he managed his time as a full-time writer. And he told me a bit about his lifestyle. He's a night owl like me! He gets up at noon-ish and stays up till late into the night.

Honestly, I do the same. I function much better at night than the day and for the longest time I've felt ashamed of that. But I got to thinking a lot of nurses have to do the same. I no longer feel ashamed of my schedule as a writer and that feels so relieving. I wake up at 11 a.m. and got to bed at 2 a.m. and you know what? That's okay.

Besides talking to Robert Liparulo and David Farland, I met and re-met a lot of authors including Jill Williamson, Kerry Nietz, Nadine Brandes, Tosca Lee, Ben Wolf, and Gillian Bronte Adams! It was so cool meeting so many speculative fiction writers! I bought some of their books as well. ^ ^

I also met some Go Teen Writers members: Katie Erickson and Rosalie Valentine! It was so cool being surrounded by so many people who think like me: writers and geeks who get references (like shouting "It's bigger on the inside!" in a crowded elevator) and share at least three fandoms with me. 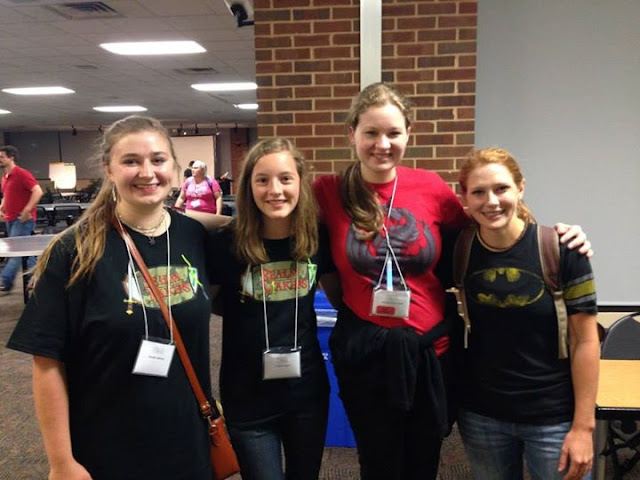 I'm not the only geeky spec-fic aspiring writer out there who hates mornings and gets so into their characters they take on the emotions of them. I'm not the only one who is still seriously working on breaking into the field and needs financial support from others during that time. I'm not the only one that works ten hours plus on their craft every day. I feel less alone and weird. I feel more accepting of me.

The last thing I have to report is I pitched to two editors and an agent at the conference and all three want to see material. ^ ^ One is a shot in the dark, but the agent seemed really excited about both of my main projects, Red Hood and Subsapien Biomech. The second editor wants the book longer so more work for me. XD I'll be submitting material to five out of six of the people who want to see it at the end of the month. Prayers would be much appreciated. I also had writer Torry Martin brag on me, which felt really cool.

So though this wasn't as mind-blowing as FCWC 2015, this still was a big growing experience for me. I was the most social this introvert has ever been.

Thank you, Realm Makers attendees, for welcoming me even if I got off to a rough start. Thank you for making me feel loved. Thank you, editors and agents, for being willing to see my material. Thank you, Robert and Mr. Farland for propelling this aspiring writer forward.

Have you attended Realm Makers? What did you think of it? Have you been to a writers conference? Have you met any of these authors? Have you had trouble accepting yourself? Has something helped you move past that?