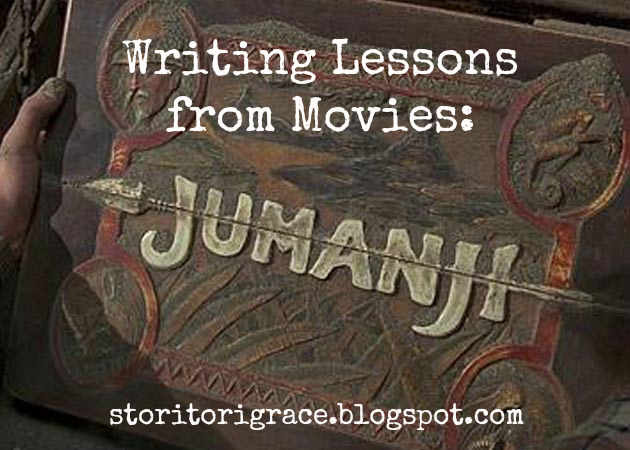 Like many of you, I too was scared by the film Jumanji as a child, but as I've gotten older I've really grown to enjoy this movie. It's a classic in my home.

In case you have seen it, the film is about two children that find a cursed game that tempts people to play it and brings perilous elements of the African jungle to life. The main character Alan is sucked into the game. Years later he is released as an adult into an alternate future because of his absence. Now he, his childhood friend Sara, and the two children who brought him out of the game must win Jumanji to reverse the dire consequences. I recently watched this with my family and I realized there are several good writing points we can draw from one of my favorite Robin Williams films.

Warning: There will be some movie spoilers.

1.) The Protagonist Starts In a Sympathetic Situation - One of the writing tips I've seen tossed around is that a good way to endear your reader to your main character is to start them in a sympathetic situation. Jumanji did this by immediately showing Alan Parrish chased by bullies then talking to his stern father within just a few minutes into the film. You immediately cared about Alan.

2.) The Protagonist's Fears and What Needs to Be Changed Is Shown Right Away - Another way to make your reader care and to deepen your characters is to show the protagonist's fears close to the beginning of the story. Jumanji did this by showing his fear of standing up to anyone and his fear of becoming his father. As the movie progresses he learns to overcome these fears and grow.
.
How this can be applied to writing: Everyone is afraid of something and so should your characters. Think of a few fears that your character has and show them soon in the story and/or throughout the story. This gives internal conflict which will add even more tension to propel your story and grow your main character. Your character should be a different person at the end of the story than they were at the beginning.

3.) Tensions Escalate - One of the movies best aspects is how it manages tension. Every problem the characters face has higher and higher stakes and has well-placed rest points. With each trial that emerges out of the game, they steadily grow worse, starting with bats and ending with a house-splitting earth quake. The tension keeps the viewers propelled forward and forces the characters to win or die.

Another well-used tension the writers implemented was the use of environmental tension. In the alternate future created by the game, the town of Brantford has become run down due to shoe factory shutting down. As the game progresses, Alan's mansion becomes more and more destroyed and eventually becomes a microcosm jungle. The viewers want more and more for the characters to win so these horrible consequences can be reversed.

Tensions between the characters are used as well. Alan and Sara fight a lot. Judy and Peter are at odds with Alan at first. Carl doesn't recognize Alan and becomes a hindrance. This further escalates the stakes for the story.

How this can be applied to writing: Tension is one of the main elements of your book that's going to keep your readers flipping pages whether it be action, environment, or between characters. Raise the tension more and more in your story as it progresses which each problem more challenging for your characters than the last.

4.) Parallels - Another one of my favorite aspects of Jumanji are the multiple parallels found in the story that challenge Alan. Van Pelt, played by the same actor as Alan's father, scares Alan more than anything else in the game because he reminds him of his father. And finally at the end of the film he has the courage to stand up to him, which in turn gives him the strength to stand up to his own father.

Alan sees much of himself in Peter. Peter tries to please Alan and show his bravery even to Alan's unappreciative reactions. Eventually Alan realizes he has become like his father even after years alone trapped inside the jungle of the game despite swearing to himself he never would be.

How this can be applied to writing: Can you add a parallel into your story? It could be a parallel in people or circumstances. Though this isn't a necessity, it is a neat element to have, and can create some interesting situations.

Like many other movies and shows, Jumanji can teach us a lot about writing. When consuming media, keep an eye out what you can glean. It can help improve your craft--and can give you the excuse to binge-watch for research. ;)