So Your Character is From the South ... 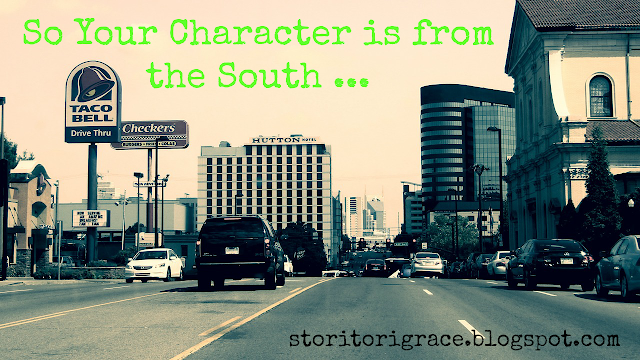 The Southern United States is hot in the middle of controversy nowadays, the most recent upheaval being the banning of the Confederate Flag (which I totally do not agree with. Banning a flag is not going to solve racial problems. It's not racist. It's part of history. Deal with it.). Politics aside, the media and ignorance has also fed the Southern stereotype. I'm from the South, born and raised, and I'm here to debunk a bunch of Southern misconceptions and reveal the truths so we can halt the stereotype train. 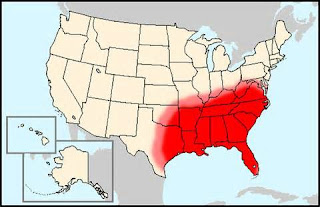 1.) The Accent - Probably the most well-known attribute of a Southern denizen is their accent, that characteristic Southern drawl people know through films like Gone with Wind. Firstly, though many people in the South have accents, many don't. I know many people born and raised in the South and they don't have any accent at all. Many people who are from southern Florida don't have a Southern accent, though ones in northern Florida may.

Secondly the accent varies depending on where the person is from. A Georgian accent can sound different than a North Carolinian accent. I would suggest talking to someone from the area (if they have an accent) or watching movies with actors from the said regions. A Texan accent can be a lot lighter than a Georgian accent.

Thirdly, Southern people also have certain words they say or call things something different than people in other regions. Most people know the common "ain't" and "y'all," but there is also words like "buggy" instead of "shopping cart." I have some Southern friends from middle Georgia who say "cut off the light" and "cut on the light" and "crank up the car" and "mess of beans." Also it's totally true that you'll often be called hon, honey, sweetie, sweetpie, sweatpea, darlin', and various other terms of endearment down here. Keep in mind, all of this varies in ways per region.

2.) Southern Culture - Southern homes normally value somewhat old-fashioned behavior. Ma'am and sir are used frequently, kids still got spankings (Yes, I did too, and I'm not scarred and I wasn't abused.), work ethic is highly valued (As in working outside chopping wood and sweating), and families are often very close knit.

This doesn't mean everyone is totally backwards. It just means we value tradition. No, no everyone owns a farm, that depends on where you're from. Yes, some people still fly the Confederate Flag. And not everyone values old-fashioned behavior. Bigger cities for example. And just because someone has a Southern accent or is from this part of the world doesn't mean their racist and their IQ is short a few points. I've seen people couple Southern with racist and/or stupid and that's certainly not true.

3.) The Environment - In the South, it's hot. We can have summers over a hundred degrees and winters can get below freezing depending on the area. Regions north of Central Georgia get snow annually or semiannually though even the Florida/Georgia border at rare occasions can. Anywhere south of the Florida border doesn't get any snow. Spring and late summer is usually rainy. In Florida, where the environment is more tropical, rain patterns are really weird. It can be raining in one area and a mile ahead be sunny. Sun showers are also common in the summer months.

Much of the Southern United States is rural with farms and a lot of agriculture such as cotton fields, pecan groves, cow pastures, soy fields, peach groves, blueberry patches, orange groves, and strawberry patches. In contrast, near large cities such as Atlanta you see much less of that. We have many historical areas especially in our downtowns. Churches are seen frequently. I would suggest using Google Street View when researching a location your Southern character is from.

Flora and fauna of the area consist of creatures and plants such as: Blue Jays, Mockingbirds, Brown Thrashers, Pitcher Plants, Ox-Eye Daisies, Cherry Trees, Poison Ivy, Hickory Trees, Chipmunks, White-Tailed Deer, and Wild Boar. All of these depend on the area, but here are just some for instance.

4. ) The Cuisine - Another famous part of the South is the food: biscuits, sweet tea, and fried everything. Fried tomatoes, fried pickles, fried gizzard, fried chicken, fried chicken livers ... Wild game is another thing commonly found in Southern cuisine whether it be venison, duck, frog, wild boar, or more (I cover hunters more in my So Your Character is a Hunter ... post).

This isn't to say that every person in the South eats these things, but these are some native foods. If you go into a small town, Mom and Pop restaurant, or a true Southern home, you are likely to eat some of these. But even true Southern people eat Taco Bell and pizza like most Americans. Also don't forget to take into account there are many people who aren't the norm. I for instance don't fry much of my food and I cook a lot of foreign dishes.

5.) Religion and Politics - It's very common here to be Christian and/or conservative. To many Southerners (me included), the two go hand and hand since the conservative party has the closest morals to Christianity. This said, Southern Christians aren't a bunch of crazy zealots. I cover the true nature of Christians in my So Your Character is a Christian ... post, but please, do not create any more nutsy Southern Christians that persecute everything in sight. That is not how we are.

Not saying there aren't any that are kinda dumb, but essentially we want to stand up for what is right. Please, portray religious Southerners diversely and accurately. All this said, not all people in the South are Christian or Conservative so keep that in mind too.

Media that portrayed this right:
Duck Dynasty
Dragons in Our Midst by Bryan Davis
The Blind Side
Fireproof
The Lucky One

That is a crash course on Southern people since I don't want this to be a thesis. Of course there is a lot I didn't cover, but if you have any questions about those things I'm happy to answer them.

Are you writing a hunter character? Are there any questions I didn't answer?*

*I know this can be a controversial topic, but I stand by what I said so I'm asking if you have an opposing view in the comments that you please be respectful. Thank you.