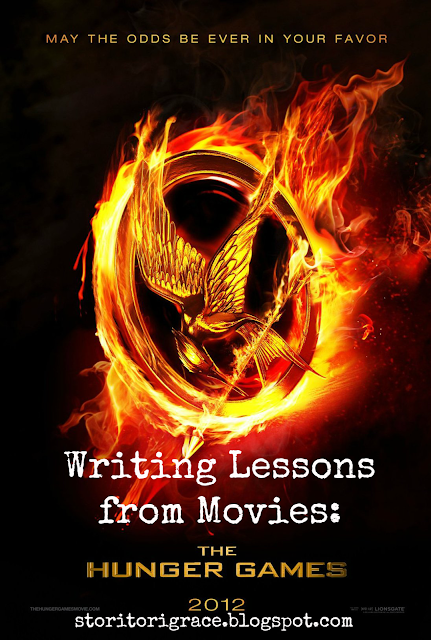 The Hunger Games is one of my favorite book series. It's in my top three next to the Lord of the Rings and the Chronicles of Narnia. This was the first super popular series I'd read that was actually popular when I read it. It was my first bandwagon ever and I was so excited to finally be in one since I was too young to see the Lord of the Rings in theaters when they came out and I wasn't allowed to watch or read Harry Potter or Twilight.

Popularity aside these books touched me in many ways. They made me view war and the psychological impact of trauma in a way I'd never read before. They showed me more about politics than other books I've read. They had a protagonist I could really relate to. They're one of the iconic books that changed how I write.

Warning: There's going to be spoilers.

1.) The Protagonist Acts like She's from Her Background - There is a lot of debate about Katniss. I've known a lot of people who diss her for her course personality. But guess what. That's how someone would act given her situation. She's a sixteen year old girl who's had to become mother and father for her sister and take care of her grief-stricken mother. She had to become an adult at a young age. She lives in an environment where she could easily be sent to her death and has watched other people die, in fact her dad died. What do people expect?

Someone who's gone through all that isn't going to come out happy-go-lucky. It's just not natural. Her hardness comes from having to tell herself to toughen up if she wants to survive. It's sad, but it's suitable for the character. That isn't to say she doesn't have an admirable tenderness and compassionate for those in need.

How this can be applied to writing: Have you ever seen a movie and the protagonist is said to come from a particular background but doesn't act like he/she does? Doesn't that make it harder to buy their story? The character should act like they're from their background.

If they're from a tough situation they're going to have some damaged behavior. It's an exception for someone to not act at least somewhat bitter or they have to have a clear way that they've learned to overcome the situation. Make sure your protagonists or any other characters act their roles. Someone who's from an abusive home isn't going to act like someone from a good one.

2.) Killer Lines - "May the odds be ever in your favor." "Remember who the real enemy is." "If we burn, you burn with us." These lines stick with us even after we've finished reading the story. They resonate with us. The scenes they were uttered during are carved into our hearts, because these lines were powerful and they meant something beyond the story.

How this can be applied to writing: Can you add some killer lines to your story? Think of lines that mean something beyond just your book. You want to strike the reader's soul with them, so they will be remembered.

3.) Iconic Symbols for the Series - White Roses. The Mockingjay Pin. The Girl on Fire. Anyone who's seen even the advertisements or posters for the movies knows about these symbols and they all came from the book. Readers forever think of white roses relating to president snow or the three-fingered salute with Katniss. These represent both fear and hope. When we think of the series we think of these objects and titles.

How this can be applied to writing: What symbolic items and titles can you use in your story? How can you make them memorable?

4.) Romance That's Actually Relevant to the Plot without Gobbling it up and Making it a Romance - I'm one of those people who drools in boredom at chick flicks, but I do like a bit of romance in stories. I just don't like a whole plot of: *starts picking daisy* He loves me. He loves me not. Also random romances tossed in to the story just cause can become irritating as well. They're just there, but they don't add anything to the main plot whatsoever.

In the Hunger Games, Katniss's romance with Peeta and Gale is pretty essential to the plot and moves it along quite nicely. Her forced romance with Peeta causes a lot of strain and is part of the main plot of the second book. You can't take it out of the book and it be the same story, but the story is definitely a dystopian novel with lots of action and politics and not a romance novel.

How this can be applied to writing: When thinking about adding romance to your story, ask yourself how it's relevant to the plot. Will it add tension and conflict? Can you make it so the plot can't be the same without it?

5.) The Story Tackles the Psychological Damage to Characters - Before I read the Hunger Games, most books I'd read never dealt with psychological trauma. Anything that was remotely traumatic mostly went down like this:

Character: *slices off person's head*
Other Character: You good?
Character: Totally. *moves on with life maybe has a nightmare about the event if that*

Since then, I've also read and watched many forms of media where these character go through a great deal of trauma and deal with no psychological damage whatsoever. This is terribly unrealistic and it's missing out on huge opportunity for inner conflict for the character.

Katniss and the other tributes deal realistically with what they've been forced to endure. Many of them cope with it in different ways such as Haymitch's drinking and the Morphling's drug habits. But I also firmly believe many of them could find peace in giving their heart over to God and it's sad that many of them could never get the chance.

How this can be applied to writing: When you do something traumatic to one of your characters remember there is going to be a psychological impact on them. War, a parent's death or leaving, torture, and kidnapping are just a few things that can cause mental damage. This blogger has a great series on Post Traumatic Stress Disorder which is often a result of such trauma. I suggest checking it out.

6.) Powerful Scenes the Stick with You - Rue's Death. The Tributes Holding Hands Before the 75th Hunger Games. The Hospital Scene in District 5.

When I went to the theater to see each of the Hunger Games films, I kept thinking, "What is the Rue Death scene going to be like? They better have the jabberyjay scene. What about the scene where Finnick reveals what Snow did to him?" This is because those scenes stuck out. They had power in them. They were memorable enough to gain a basic title. Many of these scenes I've listed made me cry, because they meant something to me. They hit something inside me.

How this can be applied to writing: Think of scenes that will resonate with your readers. Scenes with power. When going of your novel, look at your scenes and see if they'll be ones that will stand out. Think of how you can craft a theme or an emotional moment in scenes that could be lacking. "Make an impression." *winks*

Conclusion - The Hunger Games is a beautiful series. It's raw and real and resonating and those are just a few of the reasons why I love it. It has many things to teach us on how to make a book to remember.

Have you read or seen The Hunger Games? Have you noticed these writing aspects? What movies have you noticed have good writing? Let's geek out together!