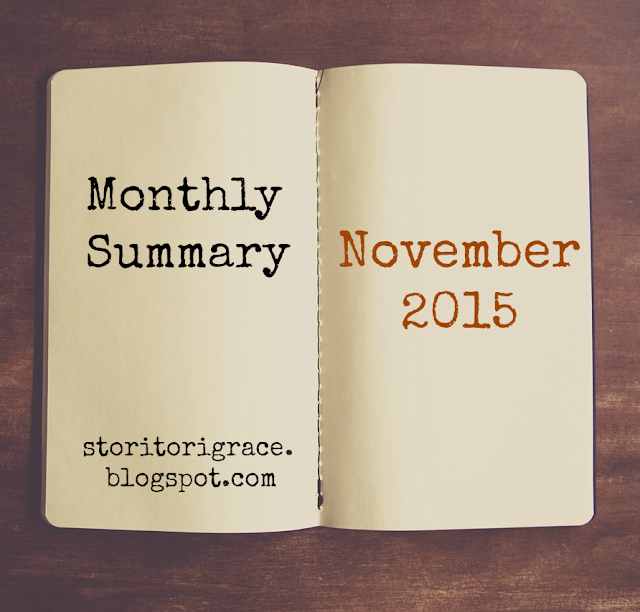 November is a busy month for me every year what with NaNoWriMo, Christmas shopping, Thanksgiving, going down to a friend's to see the Hunger Games movies, and anything other activities that come up. Though this year was a bit less crazy than last year (thanks to getting a lot of stuff done in advance), I'd still rank it in one of my busiest months of the year, but I had a lot of fun as well.

1.) I won NaNoWriMo at 53,563 words and finished Subsapien Hybrid at 58,076! Even better I finished on the 18th of November! It's the fastest I've ever written a book before! I'm definitely going to be extending this baby, but I've got the clay to make the pot now. ^ ^ I've also read over the extended bits for Red Hood, so I've began editing. ^ ^ 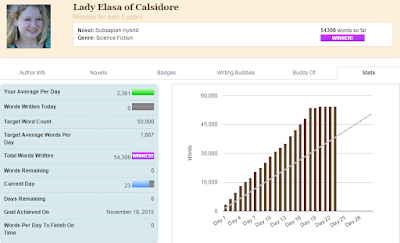 2.) Outside of writing I went to a DaVinci Exhibition, I traveled back to my hometown to visit a friend watch the Mockingjay Part 2, and of course I had Thanksgiving. The weather has finally gotten really cold for my area and we had our first freeze this week too!

3.) I finished reading Throne of Glass by Sarah J. Maas and Me, Just Different by Stephanie Morrill! Reviews will be up in the near future!

4.) I finished drawing Ingrid from my Subsapien series and I'm currently doing Caleb. I'm hoping to update with at least one of his pictures before the month is out! 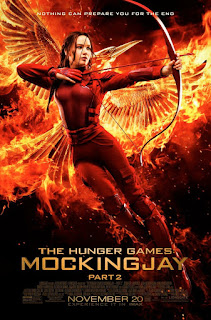 1.) I went to see the Mockingjay Part 2 and I cosplayed as Katniss Everdeen! I also won first place in the costume contest at the theater and won that Peeta stand-up next to me! I loved the movie so much. It was amazing! Such a great ending to the series. ^ ^ 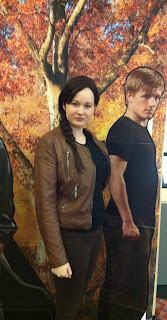 2.) I've started watching Lost and I enjoy it so far. The mystery is intriguing and I like going into each of the characters' backstories and seeing their origins. It's definitely a trippy show though. You're unsure what's real and what's not many a time.

3.) I've been wanting to play Portal for years and recently both of the games went on sale in a bundle for only $6 and I couldn't pass that up, so when I've gotten a spare half hour I've played a little bit of it. The puzzles challenge my mind and the creepy mystery of it is very cool too. The lab element is Subsapien inspiration. ;)

4.) For some time I've wanted to catch up Good Mythical Morning and now I'm actively doing it again. I'm almost through season two! Rhett and Link make me laugh so much.

5.) I've also been catching up on RWBY and I'm enjoying the third season so far. The animation has improved greatly and the story is taking a darker turn. Check out my post about lessons from RWBY about writing! 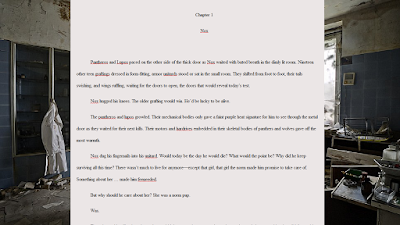 2.) NaNo is so much better with a buddy. Last year I plodded along barely getting by. This year I sped through NaNo like a cheetah and finished twelve days early! All of this is because of my writing buddy. She's helped me writing so much. It's just been fantastic having her.

3.) At the DaVinci Exhibition, I learned so much about Leonardo DaVinci. I could spend an entire post about him, but I'll tell you a few facts. Many of his gear and ball bearing systems are used today in things we use today. In this old engine, he invented all of the mechanisms, but a spark plug. He also invented the parachute and was the first recorded person to perform an autopsy. He's also credited for inventing robots and the tank!

4.) I really enjoy making playlists for my books. As soon can see in my Soundtrack Sundays posts, I listen to a lot of soundtrack music. The way I arrange playlists for my own books in iTunes is I look through albums that fit the tone of my story (For Example: For Subsapien Hybrid, I used tracks from the Maze Runner, The Host, The Hunger Games, Divergent, and others). I put them all in one playlist then as I write I arrange them in order and decide which ones I keep. I've found it an effective method. 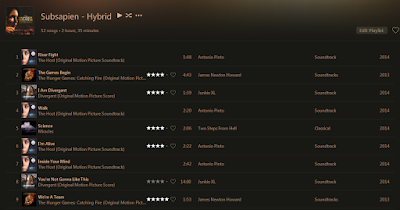 5.) So Jamie @ Through Two Blue Eyes posted about this sound effects site for table top gaming. It's perfect for writing. It also makes an amazing combination when you put it together with music. It can be super creepy.

1.) Next month I'm planning on rewriting the extended parts of Red Hood. They need some work. With doing 50K so fast, 20K should be no problemo. I'm not sure if I'll get it all done in December, but I'll get as much done as I can and finish in January. I'm hoping to get the extended parts edited and put together before I go on a trip on the second week of February so by February 10th, so my betas can read it while I'm gone then I can send it off after I get back.

2.) Christmas is coming up so I will be enjoying that and many other parties and Christmas activities. A friend of mine is coming from out of town for New Years and I'm so psyched for that! I will also be testing for my next belt too! I hope I get it. It was one of my New Years Resolutions. And lastly ... JAMES DASHNER IS COMING TO MY AREA AND I'M GOING TO SEE HIM! I'M SO EXCITED!

3.) I'm going to finish Angel Eyes by Shannon Dittemore and Peril by Suzanne Hartmann. Then next month I'm going to start A Time to Die by Nadine Brandes, the 5th Wave by Rick Yancey (I want to read it before seeing the movie), and I'm reading Curio by Evangeline Denmark for review! Christian steampunk! Yessss! 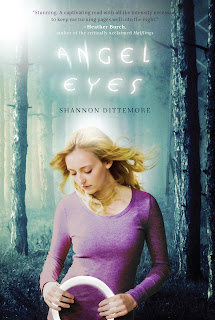 4.) I may not be able to complete my Expressions Challenge this year, but I'm going to make a valiant effort and try to finish at least one more drawing next month and the challenge can bleed into next year. I will finish it! I'm hoping to work on Caleb (if I haven't finished him yet), Ashlyn, and Rouyn next month.

5.) I also want to do even more reviews for Geeks Under Grace. I'm planning on doing more video game reviews and reviews of the Lord of the Rings and Studio Ghibli films!

Writing Stuff:
Questions for Nox!
How Can Characters be Powerful If They're Not Real?
Beautiful Books:The Writing Process - Subsapien: Hybrid
A Book Review of Failstate: Nemesis by John W. Otte
Writing Lessons from Movies: The Hunger Games

December 4 - I will be posting a call for questions for ... me! I'll be having a Q & A. You can ask me whatever you like whether it be writing advice or about me or my books. The Q & A will go up December 18!

December 5 - Extending Your Novel (may revise with catchier title) - As suggested by Sara Letourneau in this post, I'll be talking about ways to extend your novel without adding irrelevant or needless material.

December 12 - A Book Review of the Judgment Stone by Robert Liparulo & Heir to Darkness by Jill Williamson - This month I'll be posting two book reviews since I'm part of the promotional group for  Jill's new series!

December 19 - Writing Lessons from Sherlock - A post where I will be talking what BBC Sherlock can teach us about writing.

December 23 - January 8th - Hiatus - Due to the holidays, I'm going to take a two weekish break from blogging to rejuvenate myself for the coming year. I will be back on January 9th! But ...

December 31 - Monthly Summer: End of Year Edition - I will be back briefly with a special monthly summary post where I'll be talking about this year as a whole, Christmas, and New Years resolutions. I'll be having a giveaway and a survey and announcing a special blog project starting next year! Don't miss out!

1.) Emily over at the Incandescent Life talks about some great productivity hacks!

2.) Sara Letourneau talks about the Comfort Zone in character arcs over on her blog! There's Aragorn ... Lots and lots of Aragorn.

3.) Alison at Alice and Alison's Wonderland Recipes shared a divine recipe for an Amity Autumn Apple Salad inspired by Divergent. I recently tried it and it's ... so .... good ...

4.) Cassia at Dimensions of My Universe shares some helpful items that are required for NaNoWriMo!

5.) Sunny wrote a post about reaching out to people outside of your blog. I admit. This was tough for me at first.

And last but not least this awesome contest is going on that you can win a trip to castle to write in for NaNo! For every person I refer from this link, I get three more entries plus the person gets a chance to win as well. ^ ^

This is always a nostalgic time of year for me as I reflect on this year and past ones. It's a reverent time mixed with sadness and joy. I can't believe it's so close to the end of the year! It's been a pretty good one and I'm excited for the next one.

How was your month? What did you do? Are you looking forward to any of the upcoming posts? How was your Thanksgiving? What are you doing for Christmas? Did you win NaNoWriMo? Did you see the Mockingjay Part 2? Any mythical beasts out there?