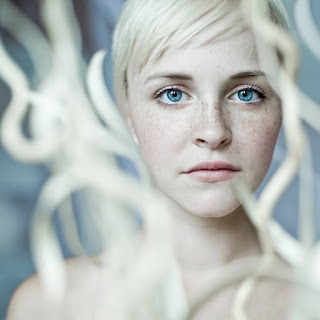 Hey, everybody! It's time for this month's character interview! This month I'm featuring another character from Silver Hood (Red Hood's sequel), because I begin writing a planning for the book next month! Sonne is an important side character in the book--and she based another another fairy tale character. Let's see if you can guess who she is.

Sonne is a twenty-four year old Isamaour. Three old ladies raised her and taught her how to use the conversion magic native to her people. She uses her abilities to fight for the coalition opposed to the war between Isriki and Silfurlund.

She grew up in the war-torn southern lands of Isriki where she's seen many a battle between the werewolves of her land and the troops of Silfurlund. Due to this conflict she had moved frequently to avoid the fighting and hated the humans for causing her to uproot and become separated from friends. When she was a little girl, a human soldier showed her kindness and shortly later she watched him die by her own people's hands. She came to realize that her country's aggression has caused her lifelong toil, despite Nzelt's propaganda. She became outspoken about her unusual standpoint and endured much ridicule and scorn. As a teen, she learned of The North Wind, an entire group of people who share her views. She sought them out, became one of them, and has been fighting for the cause ever since.

Her constant companion is, Mjukur, a moth the size of a bird. He sends messages for her and assists her battle. A sling and a bolas are her weapons of choice, though her magic can also be used in combat. She's a bold and passionate woman, who only uses violence when absolutely necessary and avoids killing at all costs. Her ultimate goal is peace and she wishes  to achieve it with the least bloodshed possible. Enough blood has been spilled before her eyes.

Leave your questions in the comments or in the form if you'd wish to remain anonymous or if you're having trouble with the comments and Sonne will answer them on February 26th! Thank you!