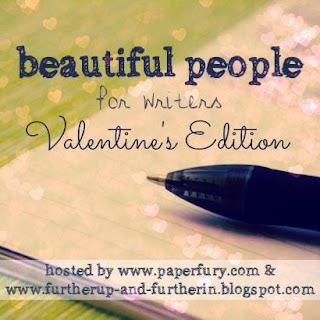 Yay the first character-based questionnaire for BP! I'm using two characters from my Starbloods series which is my long-neglected high fantasy series that's in great need of an overhaul which I'm working on. I'm hoping this interview will help it along! If you'd like to participate in this link-up yourself, check out either Paperfury or Further Up and Further In to see how. Here we go!

1.) How did they first meet?
This is mostly told in their book, but they meet on his journey to reunite with his parents after the home he grew up in is compromised.

2.) What were their first impressions of each other?
They were very unsure of each other, because they didn't like the idea of having their other half defined for them since they were born. Basically, it was awkward for a while.

3.) How long have they been a couple?
A few months now. They've known each other for long, but they've just recently made it an official thing.

4.) How committed/loyal are they to each other? Would they break up over a secret or a disagreement? Could stress drive them apart? Would they die for each other?
They're very loyal to each other and would die for one another. They have this inborn connection with each other since they're a couple destined to find each other.

5.) List 5 “food quirks” they know about each other. (Ex: how they take their coffee, if they’re allergic to something, etc….and feel free to mention other non-food quirks!)
1.) Rouyn doesn't like fish. He had it too much growing up.
2.) Elasa always puts cinnamon imported from Tephoria in her tea.
3.) Rouyn peels the skin off of his chicken.
4.) Elasa's favorite fruit is peaches.
5.) They both don't like crab.

6.) Does anyone disapprove of their relationship?
Yes. The prophecy that divines them to be together is one saying that they'll have a child that will destroy the false gods causing havoc in their world. There are a lot of worshipers of those false gods that aren't happy about that prospect, including High Priestess Vanmoriel and Lord Mordraug.

7.) What would be an ideal date?
Since this is a medieval/Renaissance like period they don't formally have dates, but they do enjoy horseback riding and picnics.

8.) What are their personality dynamics? Similar? Contrasting? Do they fight a lot or mesh perfectly?
They mesh well. Both of them enjoy reading, animals, and they're both starbloods (half humans half stars). They have their differences though, Rouyn is more extroverted than Elasa is. Elasa has dealt with a lot of health issues growing up, while Rouyn has had perfect health. Elasa grew up in nobility, while Rouyn grew up among a sylphaen colony, though with the knowledge of his lineage, so he'd be safe until he matured. Rouyn's parents are alive and well though he only met them in person recently, Elasa's both died.

9.) What have been their best and worst moments together as a couple?
A lot of these happen within the story.

10.) Where do they see themselves and their relationship in the next few years?
They'd like to eventually marry, not just because they're ordained to, but because they genuinely like each other.

What do you think of Elasa and Rouyn? Did you participate in the Beautiful People? Are you planning to? If so let me see your posts in the comments!