A Book Review of Allegiant by Veronica Roth 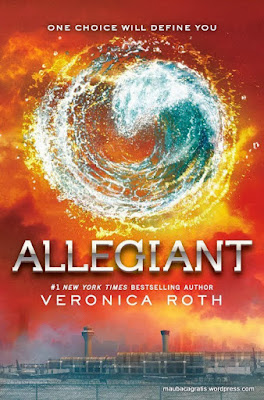 The faction-based society that Tris Prior once believed in is shattered - fractured by violence and power struggles and scarred by loss and betrayal. So when offered a chance to explore the world past the limits she's known, Tris is ready. Perhaps beyond the fence, she and Tobias will find a simple new life together, free from complicated lies, tangled loyalties, and painful memories.

But Tris's new reality is even more alarming than the one she left behind. Old discoveries are quickly rendered meaningliess. Explosive new truths change the hearts of those she loves. And once again, Tris must battle to comprehend to complexities of human nature - and of herself - while facing impossible choices about courage, allegiance, sacrifice, and love.

Told from a riveting dual perspective, ALLEGIANT, by #1 New York Times best-selling author Veronica Roth, brings the DIVERGENT series to a powerful conclusion while revealing the secrets of the dystopian world that has captivated millions of readers in DIVERGENT and INSURGENT.


I've procrastinated reading this book for years, primarily because I know about the crappy ending, but since the film is releasing soon, I want to read the book before seeing it. Therefore I libraried this book so I could know the source material and so I could have an opinion of it. Welp, I have an opinion now.

The Plot: The plot was intriguing. We get some clarity about why there are the factions. We learn about the Purity War and a secret diary and genetic damage. Lots and lots of reveals. Information overload. Tensions between the Allegiant, the Bureau of Genetic Welfare, and the rebels are all coming to a head.

The problem is the plot. Is so. Slow. It took like 100 pages to get anywhere. If I had edited this thing, I would have cut so many scenes that were just there for no reason and sped up this thing. I hope the film fixes this problem. It was pretty glaring. The book started interesting then went down into this "nothing really happens" phase then got good at the end, then ended not very well.


The Characters: Tris was muuuuch better than she was in Insurgent. She irritated the living crap out of me in that book. She grew a lot in this book, which was really cool to see. She becomes like the factions: wise, honest, brave, kind, and sacrificial ... especially sacrificial.


Tobias is great an all, but he's nothing compared to Tris. He's a bit selfish for one. His relationship with Tris got rocky during the whole affair about damaged genes. I get that kind of tension, but it'd be nice to have a steady couple in a story for once.

The other characters were fine, but they didn't stand out to me. David was an interesting antagonist. There were multiple antagonists between Evelyn and Marcus and Nita. Everyone had different goals, which was cool. You got why they were motivated to do what they did.

I like Zeke and Christina. George and Amar were interesting characters then they had to be randomly gay. It didn't do anything for plot. It was just "And then they're gay and one of them had a crush on Four." What the heck? The whole scene where that was revealed didn't do anything, but include a random homosexual reference.


The Setting: It's nice to finally see what the world looks like outside of dystopian Chicago--and it looks nothing like the red land of wonder like in the Allegiant trailer. Just sayin'. It definitely has a lot of cool technology. One of my favorite scenes is when Tris flies in a plane for the first time and she sees the world from up high. The setting isn't extremely exciting, but it's neat to get a change of scenery.

Epic Things: The whole concept that these faction cities were created because of genetic damage being blamed for problems is pretty neat. Also Tris and Tobias's immunity to serums is neat as well.


The Theme: I liked the themes of closure finally for Tris with her parents. I liked seeing her blossom into a really beautiful person. Her sacrificial nature is inspiring and her coming to the revelation that blood is in the end before faction.


I like the theme about no matter how we try to predict things, in the end we have to accept that some things will forever be unknowable. We're humans. We can't fix everything. We have a natural tendency to sin. That's why we have to trust and have faith in God.


1.) Character Voice Did and Didn't Work - Roth is really good getting deep into someone's head. She's good at making you feel like you are indeed seeing everything through this character's eyes. The problem is though Tris's voice is really strong, I often confused it with Tobias's. I sometimes forgot I was in Tobias's head until he said something in particular. I had trouble discerning who it was I seeing the world through.


How this can be applied to writing: When you write in multiple point of views, it is key that you establish the POV character fast with each switch (this is very difficult with first person which is why it's recommended to use third with multiple POVs). As a bonus, you want to make sure the character sees the world differently down to even how they describe things. Tris and Tobias's thought patterns were different, but how they saw things was nearly identical.


2.) The Pacing Didn't Work - Unfortunately, pacing is not Roth's strong point. Like mentioned before it took too long to get to each plot point. I started getting bored because of all the filler. Every scene in your story needs to have an overall purpose for the plot or for the character arc.

How this can be applied to writing: Pacing is the speed a story goes. Usually stories go through periods of fast and slow pacing like pendulum, fast then slow, fast then slow. This keeps the story interesting. If the pacing is too fast it can overwhelm the reader. If the pacing is too slow the story drags on. A good book needs a balance of both fast and slow pacing.


3.) Overuse of See, Heard, Watch, Felt, Etc. - She has an excessive use of "I watch" and "I see." Most are unnecessary and bog down the writing.


How this can be applied to writing: Most of the time watch, see, heard, felt, heard, etc. aren't needed. When the character mentions something it's most likely they heard it or felt it. Only when it needs to be defined do you need phrases like this, like a character looking away or if one of those senses are somehow impaired such as in a dark place or if they are deaf or have their ears plugged. Using those words are telling and make the writing choppy.


Content Cautions: There is a good deal of violence, including gunshots, punching, and explosions. Nothing exceedingly graphic, but someone's bone being broken by an ax was wince worthy. There is some intense kissing, which may have led to a sex scene at one point. It was skipped over if it did. It was honestly hard to tell. There's some swearing to take note of: d*** is used four times, sh** is used eight times, and h*** once.

In Comparison to the Film: The Allegiant film's plot stays close to the book, but the end is drastically different. I'm a bit shocked actually. Check out my full review on Geeks Under Grace.

Conclusion: Though I liked this story better than Insurgent, it left me with a disappointed feeling at the end. I get why Veronica Roth ended it that way, I do, but it was still depressing when the story was all about Tris. Unfortunately, this book only gets two stars from me. 2.5 if I had that rating.

Veronica Roth is from a Chicago suburb. She studied creative writing at Northwestern University, and wrote DIVERGENT (Katherine Tegen Books, May 2011) and INSURGENT (May 2012). The third and final book in The Divergent Trilogy, ALLEGIANT, will come out on October 22, 2013. In the meantime she will spend endless hours browsing Wikipedia in her pajamas as she eats corn flakes. (Or some other kind of bland breakfast cereal.)
You can find her on Facebook, Twitter, Goodreads and her blog!

Check out my reviews of Divergent and Insurgent!