It's time for this month's character interview and I'm doing it with a character from Subsapien! I haven't done any characters from my sci-fi this year yet and that's a shame. This is Pro Jamerson, a side character from the series. Here's a bit about her!

Pro (Promise) Jamerson is fifteen years old, but don't call her "Promise" unless you want a fist to your face. She is a biomech aka she is half human and half mechanical and works for the government to support her poor urban family, whom she only gets to visit on weekends. After an accident with some of her brother's drug dealers, Rota made her whole again. She feels both indebted to them and grateful she can also help out her single mom and older brother.

She has worked undercover for the government for over a year as spy in a school to root out traitors to the country among the students. This work has conflicted with her morals, but what choice does she have? She's gone too far to go back. When not at school or playing basket ball, she trains for future missions at Rota. The moment she became a biomech was when she became permanent asset for them.

Though her time is short, she savors the precious weekends she has with her family. After her former roommates disappeared, she gained two more in Bryce and Caleb. They are different than her others, and Bryce irritates her, but she enjoys not being alone in her dorm anymore. Despite what Rota tells her she wishes there was a way out of Rota, but she dares not try to leave, because that's what her roommates did and she's never seen or heard of them since. 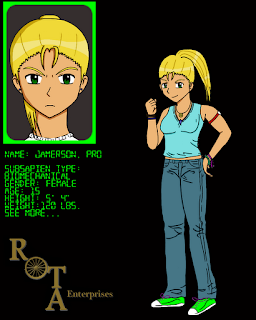 Leave your questions in the comments or in the form if you'd wish to remain anonymous or if you're having trouble with the comments and Pro will answer them on March 25th! Thank you!