Antiheroes 101: What is an Antihero and How do you Write a Successful One? 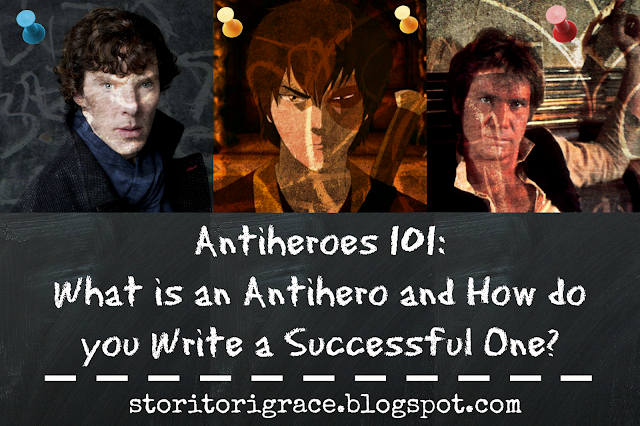 Captain Mal (Firefly), Sherlock Holmes (BBC Sherlock), Tony Stark (Iron Man/The Avengers), Han Solo (Star Wars), Dean Winchester (Supernatural), Jack Sparrow (Pirates of the Caribbean), Zuko (Avatar: The Last Airbender), and Guy of Gisborne (BBC Robin Hood). What do all of these characters have in common? They're all antiheros. What is an antihero exactly? It's definition can be unclear. Some think it means a villain or antagonist, but that isn't the case. Let's look at the definition.

antihero
noun, plural antiheroes.
1.) a protagonist who lacks the attributes that make a heroic figure, as nobility of mind and spirit, a life or attitude marked by action or purpose, and the like.

Though I must make a modification to this since often an antihero isn't always a protagonist, considering Zuko, Han Solo, and Guy of Gisborne are heroes but aren't main characters.

A hero, like Aang, is on the extreme good side of the scale. He is a good person and a hero through and through. He is sacrificial, kind, and wise. And no I'm not against having genuinely good characters, because some people are genuinely good people. Flawed in some ways, because everyone is flawed, but I'm not advocating the disappearance of morally north characters. That's a rant for another day. Moving on, but I had to make a note there.

On the other hand, Ozai is the antagonist through and through. Though he cares about the Fire Nation, he's ruthless and cruel. Antiheroes fall into the middle of scale. Zuko is in limbo. He acts as an antagonist to Aang in Book 1: Water, then in Book 2: Earth he moves into the antihero role. He has good intentions but they are at war with his obsession with capturing Aang and his father's influence.

How does one write this in the middle character? If you couldn't tell, they're a bit tricky. Because they're not in the higher percentages of morally good, it's easy for your reader to not like them. This is detrimental if your antihero is your protagonist.

Here are six tips to help you write a successful antihero:

1.) Make Them Sympathetic - The main way you're going to get your readers to like a character is to create sympathy. This goes for any character you want them to like let alone antiheroes. Showing or alluding to something sympathetic in their background will bond your reader to that character. It can be an absent parent, a lost loved one, a tough upbringing, etc. This isn't completely essential for an antihero, but this is one trick to make them likable. Don't use this as an excuse to infodump, but you can't hint at this tragic past or dark secret subtly throughout the story and maybe even have a big reveal scene. Who doesn't like those?

Example: Dean Winchester from Supernatural - Dean can come across as a not very nice guy. He can be rude, vicious, a jerk, and his moral lines are pretty blurry, but one reason he is so liked is because of his sympathetic backstory. Whether it be losing his mom at a young age, practically raising Sam, being forced to be a soldier against a hidden world as a child, or always struggling to please his dad, you can't help but care at least a little for him. You feel bad for him.

2.) Make Them Have Patches of Good - This is especially needed if you have an antihero on the antagonist side such as a lackey. Having your character do something good even if it's as small as being kind to an animal or child will have your readers like a character much more. Other things can be having him/her help the protagonist once or twice. Basically, showing that there is a spark of hope that this person is redeemable or that this person is human and not heartless robot is what you want to do.

Example: Sherlock Holmes from BBC Sherlock - Sherlock can be insensitive and rude, but in the end he loves John, Lestrade, and Mrs. Hudson no matter how much he tries to deny this. I talked about this in my Writing Lessons from TV Shows: Sherlock post. When Moriarty had explosives strapped to John and guns pointed at him, Sherlock did everything he could to prevent the loss of his friend. When men hurt Mrs. Hudson, he made sure she was safe. He showed good, despite his "high-functioning sociopath" claims. It's one reason why we love him. He prides himself in being unfeeling, yet sometimes he can't help it.

3.) Make Them Humorous - This is the third way to encourage your reader to like your antihero character. You have to admit, if someone makes you laugh you instantly like them a little bit more. A joke, a witty line, or even some slapstick can go a long way to make you like a character. Make sure the humor fits the character. If you don't want the antihero to seem silly or childish, choose more mature humor. It isn't necessary to make your antihero funny, but it could be a useful tool.

Example: Tony Stark from Iron Man/The Avengers - If Tony Stark wasn't humorous, he'd just come off as a childish, spoiled jerk. At the beginning of Iron Man, he inconveniences his bodyguard and is mean to pretty much everyone around him. The only reason we like him at that point is because of his humor. Eventually he finds purpose in becoming Iron Man, but at first he's really not a nice guy.

4.) Which Way Are They Going to Tip Toward? - Staying completely neutral in a conflict between two parties is difficult. A character is going to have a tendency to lean toward one side, even if they try their hardest to remain neutral or even switch sides. Which side is yours going to lean to? Are they going to be more evil or more good? They may lean in whichever direction because it benefits them or they feel morally compelled toward either side.

Example: Captain Mal from Firefly - Mal is a bloodthirsty rapscallion, but he cares deeply for his crew and he wouldn't hurt them (except maybe Jayne). He'll even defend members within his crew like if Jayne is saying something dirty around Kaylee. He'll rescue his crew members if they're in danger they'll rescue him. He believes that everyone should be free from the oppression of the alliance and he's against Companions. Although, he may technically be a criminal, he has a set of morals for himself. Because the show was so short, I don't think Mal could get a proper character arc, but I believe he could have had a positive one where his morals improved.

6.) Can You Write a Great Character Arc For Them? - Because these characters are in this state of limbo, they can have drastic and powerful character arcs, whether it be a descent or an ascent. Personally, I favor the ascent. Watching a character change from a low place into a high place is so inspiring, while watching a character descending into a bad place is tragic. I'm not saying the latter can't be useful, but it has an entirely different effect.

Take care to make sure the things that made you love the character remain. Think of a positive emotional arc as taking away the gunk and exacerbating the good. This doesn't mean the character will be flaw-free, but they will have conquered past struggles.

Example: Prince Zuko from Avatar: The Last Airbender - Prince Zuko of The Fire Nation's character arcs has to be one of the most powerful I've ever watched. Seeing him come from an angry, obsessive, out-of-control, inconsiderate boy to a calm, wise, self-controlled man is amazing to witness. It inspires us as human beings to aspire for greater. Many of us who have gone through terrible things can be considered antiheroes, but we all have the potential to change into something beautiful.

Conclusion - Antiheroes can be immensely powerful characters. Though not all stories call for them, they can be very useful for a plot and provide many good twists. They are more difficult to write, but if you write one well, you have a massive asset to your story. Now get your sassy antihero smirk on and write one!

What are some of your favorite antiheroes? Have you ever written an antihero? Do you have further questions about antiheroes?