A Book Review of Peril by Suzanne Hartmann 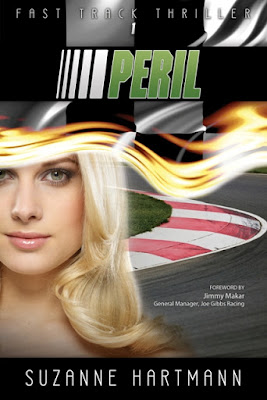 A top-secret agent. A high-profile assignment. Danger at a NASCAR track. Lady Anne, a top operative of the OJL, the American government's most clandestine intelligence organization, is paid to be paranoid, and she's good at her job. So good, in fact, that she singlehandedly stops an assassination attempt at the White House. When newspapers splash her photo over the front page for saving King Ahmad-a Muslim recently converted to the Christian faith-not only is her cover in jeopardy, but the secrets of her enhanced strength and the entire agency. Then she's given another assignment-to escort King Ahmad to a NASCAR track.... Stuart Jackson, age 33 and at the peak of his career as the reigning Cup Champion of NASCAR, has everything anyone could want-fame, fortune, success. But after he's nearly blown up by a bomb at the White House, his achievements lose their allure. Nor can he forget the mysterious Lady Anne.

A year or so ago I won a raffle at a conference and the prize was I could pick any book I wanted off a table. This was the only one that seemed good out of the bunch. Last year I really wanted to read all of the books I owned before I got new ones (a two year endeavor I accomplished) and this one was on the list.


The Plot: The thing that bothered me the most with this book was the plot. At first it seemed like it would be all about protecting this Muslim-converted-to-Christian king with explosions and assassination attempts and then the book descends into making sure this NASCAR driver is saved. The main character's goal got lost. The beginning starts off with a bang, but then the tension degrades into a sorely lacking climax. The action came too suddenly in the beginning as was climax material not opening material.


The Characters: Lady Anne is an interesting protagonist. She had a lot of interesting elements. Her being superhuman was pretty cool, but I wish the story went into that more. She used her powers a few times, but the weren't as central as I wanted them to be. I liked her emotional journey with trusting God and her home issues.


Stuart started off as an interesting character then steadily got annoying. He starts getting curios about Lady Anne's Christianity to the point he gets stalkerish and starts putting her in danger. It's selfish.

There wasn't really a set antagonist, just random Muslim terrorists trying to assassinate the king. They seemed a bit one dimensional and dripping in melodramatic maniacal Muslim behavior.


The Setting: It's set in various cities present day US like St. Louis. and D.C., so nothing too thrilling. I thought it was cool that the book was set in Atlanta at one point. The majority of the book is set on a NASCAR race track which I don't really care much about. The author obviously knew her stuff about racing, I'll give her back, but as someone who really isn't a sports enthusiast it didn't grip me.

The Writing: The writing was mediocre The contrived description and infodumps and crappy foreshadowing and random POV annoyed me though. It didn't stand out very much to me and the editor missed a few typos. I didn't like how the author treated Lady Anne and Joanne as two different people for the first fifth or so of the book then revealed they were the same person. I'd think that Joanne would call herself inwardly as her own name and not Joanne. That "twist" fell flat to me.


Epic Things: The most interesting thing was Lady Anne's enhanced abilities, but they weren't used to their fullest. The fact that she's a homeschool mom is pretty cool as well as Stuart's like for hunting.


The Theme: The message about God working things out different to plan, faith, and how things of the world don't ultimately satisfy seemed really pushed.

Content Cautions: People are shot and injured in other ways. Brain matter, heads craced open, exposed broken bones, and chest sliced are mentioned. Some people imbibe and Lady Anne is tempted to be with another man out of wedlock.

1.) The beginning Was Too Exciting and It Took Away from End Climax - This book started with explosions and terrorists and the president and a king of some fictional country almost dying. It was exciting and intense and ... the most action-packed part of the book. Fast forward to the climax and it couldn't even compare to this live wire beginning, which left me feeling ... jipped.

How this can be applied to writing: A story is supposed to escalate in tension as the story goes. Don't make your beginning overshadow your climax or it will feel like you're working backwards in the tension. The stakes must raise with every stage of the story.


2.) Messing Around with the Characteristics of A Genre Didn't Work - When I think of a "fast-paced thriller," my mind goes to James Bond or a Tom Cruise film or Steven James' novels. I want action, I want to be on the edge of my seat, I want a mind blowing plot twist, I want a terrifying bad guy, and I want lots of cool fight moves. This book didn't give me that. I felt cheapened out of this genre. I got patchy action, family drama, a half-baked plot twist, cardboard bad guy, some cool fight moves, and a preachy message. This book didn't live up to the genre expectations. I believe the author was trying to do something new, but if the new messes too much with the nostalgia of the old, then a problem arises.


How this can be applied to writing: Have you ever thought of redefining a genre? Have you ever watched or read something where the genre didn't work? Or when it did? Firefly redefined a genre and that worked amazingly, but books like this where they try to do something new, but the execution is bad just brings disappointment. Take care when messing with the core elements of your respective genre.


3.) Pushing A Message on Your Reader Doesn't Work - I thought Peril was going to be an exciting thriller, but it turned into a sermon. The author was so focused on getting her message across the plot suffered. The message is a good one, but the execution made it sound hokey.

How this can be applied to writing: The message or theme of your story should never come at the plot's expense. It's bad writing and it'll put off a large portion of your readers. I did a whole post on this topic, because this is a serial problem in Christian media.

Conclusion: Unfortunately, I didn't care for this book very much. I was anxious to get it done and over with. It went from thrilling to a sermon. The writing was low quality and it was too Christian-y. Any elements I liked were just not included enough. Only two stars for this one.

Suzanne Hartmann is a homeschool mom of three and lives in the St. Louis area. She holds a Bachelor of Arts degree in Composition & Linguistics from Western Illinois University. On the editorial side, she is a contributing editor with Port Yonder Press and operates the Write This Way Critique Service. To relax, she enjoys scrapbooking, reading, and Bible study. PERIL: Fast Track Thriller Bk. #1 is her debut novel. She has also written a book on the craft of writing titled Write This Way.