Writing Lessons From Movies: The Prince of Egypt 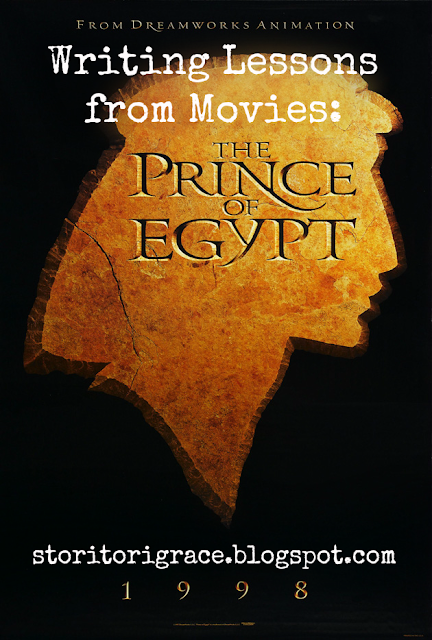 The Prince of Egypt is by far my favorite Biblical film ever made. The animation is gorgeous, the soundtrack is moving, the voice acting is well-done, and this story of the Bible which millions of people worldwide and through out history, including me believe to be true. Movies like the Nativity and Joseph: King of Dreams are the only ones that I've seen that are close to the power that the Prince of Egypt holds. I get chills every time I watch it. Just a warning, my inner love of great musicals comes out in the post. I've been a fan since childhood. I even used to act out sequences with my cousins.

I believe there is much to be learned about how to adapt a Biblical or any true story from the Prince of Egypt, and that's what I'll be discussing today.

1.) Creative License with Biblical Stories - Creative license is often taken when writing anything historical based on a true story whether it be speeding up events, altering events to make the story line smoother, or cutting out characters because that one doesn't work for the story line. This is often necessary, especially for films.

There's a point when creative license goes too far such as in Noah (2014). That movie was in a word: a disaster. The story barely resembled the original and doing this to a story that's so critical to the Christian faith was disrespectful and I might even say, blasphemous. It was unsettling to me, to say the least. Noah was not some crazy naturalist that valued a plant more than people, the Nephilim were not rock people, and Noah didn't get high to see visions from God.

How this can be applied to writing: Take caution when using creative license. A little is fine, a lot can be harmful. Do this whether you're adapting something like the Story of David and the Goliath or a historical figure such as Mother Theresa for instance. You want to portray the event as accurately as possible with respect to those connected to the event.

2.) Respect Toward the Christian Faith - Another thing I love about the Prince of Egypt, is I really feel like my faith was respected. The writers even write at the beginning and the end of the film that they did this in respect to the millions of believers of these stories. This was a great feeling. The notes aside, I saw it in the reverence the believer characters had to God, the way the plagues, the first Passover, and the Angel of Death were animated, and in the song lyrics.

With Noah on the other hand, I felt like my faith was shoved in my face. The director didn't give a crap whether he was damaging a timeless and might I add true story. He didn't realize how the ill portrayal reflects badly on my Christian faith or maybe he did realize and he just didn't care.

How this can be applied to writing: If you write a religious story, please, be respectful to the people who believe in it. I believe Moses made turned the Nile into Blood and that he parted the Red Sea. I believe God flooded the earth after humanity became corrupt in Noah's time and Noah built an ark so his family would be safe from the flood. Please, do not diss my faith shared by millions because you don't believe in it or you want to change it around to make a bigger buck.

3.) Having God in A Film Without Being Cheesy or Contrived - Portraying God, a real, living, omniscient being is difficult. I get a bit nervous about it when writing my stories. God is so complex. He's wrathful yet merciful, He creates and destroys, He speaks to us in so many different ways, He wants a relationship with us, He brought the entire universe into being for crying out loud.

The Prince of Egypt did a great job in showing the elements of God that I described. In the famous scene, where God speaks to Moses while in the form of the Burning Bush, the writers quoted from scripture and obviously did their research. I get chills every time at this scene, because of the accuracy and the mind-blowing fact that God actually did this. That a mortal man actually spoke to the Almighty. They portrayed God as He is, without making him seem hokey or contrived.

How this can be applied to writing: Whether you believe in God or not, please, give My Creator respect. I can't stand it when people in films have God look like an idiot whether he's directly in it or they have overzealous Christians running around. Evan Almighty actually didn't do a terrible God, despite me being slightly weirded out with God being an actual in presence character since if you actually looked at God He'd be too overwhelming for mortal eyes. Just saying. Basically, be respectful when portraying a Being of this magnitude. Do your research and, if you're a Christian, pray about it first. Let Him put the words He needs to say into your story.

4.) Your Heart Broke for the Film's Plight - The goal of the film is to free the Israelites, God's chosen people. A brilliant move the director did was open with the suffering and the toil of Jewish slaves in the famous song "Deliver Us." Throughout this you see men, women, and children under the brutal oppression of  the Egyptians. Whips crack against their backs. They carry heavy loads. The song is basically a cry out to their Lord to rescue them from this doomed lifestyle. This sequence immediately makes you care. It's incredibly powerful. I'm tearing up writing this post at what those people endured, what slaves have endured throughout history.

If that sequence wasn't enough to make your heart go out to these poor souls, we see Moses's mother Yocheved take an enormous act of faith in putting her youngest son into a basket in the Nile in the belief he will be saved from the massive purge of males under two years. We hear her personal plea for her son's life. This brought the plight home. It's heart-wrenching and the lyrics are just so beautiful. If you haven't listened to this song, I highly advise doing so.

How this can be applied to writing: When you are writing a story with a goal of saving a massive group of people, you need to make your readers care. How can you make their hearts go out to this cause? With any goal in fact, you need your readers to care about it. Having an emotional connection will make your reader keep turning pages to know if these people are going to be all right, if this goal is going to be accomplished. A book that did a great job of this is Starlighter by Bryan Davis. Break your reader's heart for the cause. Move them.

5.) The Crumbling Relationship Between Two Characters - One of the biggest conflicts of this film is within the relationship of Moses and Rameses. These two men grew up together as brothers. At the beginning of the film, they have a playful, loyal, and comedic relationship. But as their goals take them in two different directions their relationship erodes away with it to the point of becoming enemies. It's a sad, but very well done descent. I'll give you some examples through the great music of the film.

The first song shows Moses being satisfied in his home before he realizes what's going on with the Jews. At this time, his relationship is good with Rameses. He is happy in his ignorance of the toil of his people. (The actual song starts at 1:39)


After Moses, realized the reality of the Israelite's suffering, his whole word changes and his views clash with Rameses. The reprise shows well of what their relationship has become. I love how they quoted directly from scripture with the line, "Then let my heart be hardened." Fangirling here. (The song starts at 0:45)


This shows how the clashing of views can be a huge catalyst in the breaking of a relationship and provides amazing conflict. The descent happened slowly with small gestures such as Moses giving back Rameses's ring to large ones such as turning the Nile into blood.

Conclusion - I wish more people would model Biblically-based films and novels after this one. I'd love to see more high-quality Bible stories made like the Prince of Egypt. I didn't realize it until writing this post, but the actual Passover is today.

This is a day where the mercy God showed the Israelites thousands of years ago is remembered. The day where the Death and Resurrection of Jesus Christ were foreshadowed centuries before Jesus was even born. It's pretty amazing how God did that. The sacrifice of an innocent lamb symbolized the sacrifice of an innocent Son of God. But instead of only washing away the sins of his people for one night, Christ washed away our sins forever if we accept him. I just think that's so cool.

Whether you're a Christian or not, I ask you to take a moment to remember the Jews who have suffered through the hands of many conquerors, who died for their faith in the teeth of lions in Rome, who have carried the Christian faith for thousands of years.