How Movie Trailers Can Help You Write Back Cover Copies 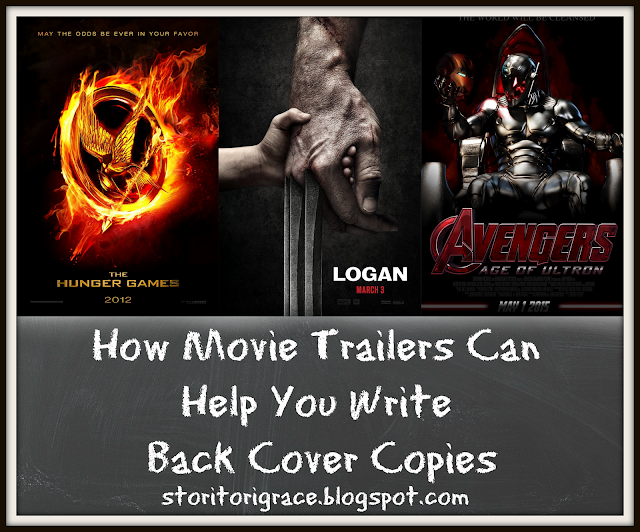 Have you ever read a back cover copy (also known as a blurb) and thought that's not like how the book is at all, that spoils most of the book, or the copy really tells me nothing about the plot? I bet you've thought that about movie trailers, too.

Back cover copies are the three paragraphs-ish (around 250 words) of text on the back of a novel or on the inside jacket sleeve. This is what people normally read when they're debating on purchasing a book. These are very handy for one sheets, book proposals, and queries. Back cover copies need to answer these eight questions:


After watching the absolutely fantastic trailer for Logan, I got to thinking that that movie trailers are basically back cover copies for movies. Yes, there are back cover copies that are on the back of a DVD case or on IMDB, but when you hear about movies what do you look at first? The trailer.

A full length movie trailer is two minutes and thirty seconds or less aka short just like a back cover copy and a good one requires answers to all of the questions stated above. What both of these things are not supposed to do is:


I can't tell you how many movie trailers I've watched and back cover copies I've read that have done this. I don't want to hate on the ones I'm thinking about, but this definitely makes or breaks whether I want to read or watch this product.

I'm going to show you examples from my top three favorite movie trailers and three back cover copies to show you how the eight questions of a good trailer/back cover copy work. Try to answer the questions on your own before scrolling to look at the answers.

I've also watched this trailer at least twenty times and it still gives me chills. Dealing with an ensemble cast is very difficult, but I feel like each were highlighted in their own way in just two minutes. When dealing with a group in a back cover copy it's best to mention the Avengers as a whole for the sake of conciseness.

When I first saw this in the theaters, I was awestruck. The nostalgic, melancholy tone of an aged Wolverine is so strong. I feel like this is going to be a heartbreaker. It's just such a well-composed trailer.

Main Character: Logan (Wolverine)
Goal: Help the last mutant (Laura)
What's in the Main Character's Way: Donald Pierce and his forces.
Setting: The Mexican border far in the future.
Genre: Superhero
Target Age Group: Adults
Tone: Action-packed, melancholy, nostalgic
Uniqueness: An aged Wolverine has to protect one of the last mutants in existence from a cyborg.


Humans and androids crown the raucous streets of New Beijing. A deadly plague ravages the population. From space, a ruthless lunar people watch, waiting to make their move. No one knows that Earth's fate hinges on one girl ...
Sixteen-year-old Cinder, a gifted mechanic, is a cyborg. She's a second-class citizen with a mysterious past and is reviled by her step-mother. But when her life becomes intertwined with the handsome Prince Kai's, she suddenly finds herself at the center of an intergalactic struggle, and a forbidden attraction. Caught between duty and freedom, loyalty and betrayal, she must uncover secrets about her past in order to protect her world's future. Because there is something unusual about Cinder, something that others would kill for.

As soon as I read this back cover copy I became interested. New Beijing? Cyborg Cinderella? Count me in! What I read here is what I got in the book.

A Time to Die by Nadine Brandes


Three hundred sixty-four days seven hours, and sixteen--no, fifteen--seconds left to live. Like everyone else on the east side of the Wall, Parvin Blackwater has a clock counting down the days until her death. At only seventeen, she has one year left. When the authorities find out she has been illegally sharing a clock with her twin brother, she is cast through the Wall--her people's death sentence. When she finds on the other side about the world, about God, and about herself changes Parvin forever and might just save her people. if can get the world to them before her time runs out.


Main Character: Parvin Blackwater
Goal: Take her discovers of the other side of the wall back to her people before she dies.
What's in the Main Character's Way: Time and the authorities.
Setting: Dystopian future
Genre: Science-Fiction
Target Age Group: Young Adults
Tone: Self-journey, Spiritual, Suspense
Uniqueness: A girl with a clock that tells her predicted time of death.


For a half century Mor’s country has been plagued by giant werewolves sent from the north. Descended from a long line of Red Hood huntresses sworn to keep the half-mechanical beasts at bay, she is determined to become a legend like her mother and grandmother. But when a werewolf warns her of the imminent attack on her home, her perspective on the creatures begins to change.
That night her village is invaded and destroyed. During the assault, while protecting a set of documents, Mor’s grandmother is murdered, not by a werewolf but by a human. Mor is assigned the task of delivering the documents to a translator in the capital of the realm. What is on the pages could reveal important information about Red Hood abilities. While her mother pursues the killer, Mor sets out on the quest with her two best friends.Along the way they again encounter the werewolf who had warned her earlier, but this time he has information that could tip the scales of war. Now the four must travel across treacherous territory to accomplish their mission. Success could mean end of the war while failure would result in death or worse—losing the information to the enemy.
Why is this werewolf helping them in a war against his own kind? What is in the encrypted documents? Will they complete their mission?

All of these examples are very unique. There's no one way to do a back cover copy/trailer, but as long as they have these eight things trailers can be effective and hopefully attract consumers. That's what we want them to do in the end, right?

9 Non-Character-Related Obstacles to Make Your Characters' Lives Harder with Avatar: The Last Airbender

Inciting Incidents 101
Reeling In Your Reader: A Guest Post by Lauren Claire
Roadmapping Your Tales
Extending Your Novel: How to Make the Story Longer Without Just Adding Fluff