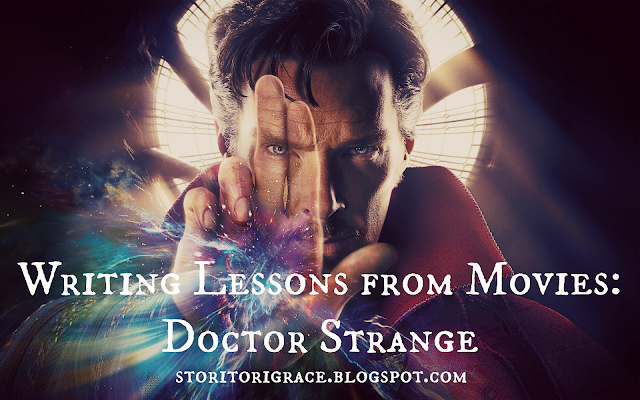 Before the trailers released, most people I knew had never heard of Doctor Strange. The only reason I knew about him was from the Facebook game Marvel's Avenger's Alliance. I absorbed a lot of my Marvel knowledge from there. With Benedict Cumberbatch starring as the one and only Stephen Strange, I knew I had to see the film. I loved it (Full Movie Review). It is own of my favorite movies of 2016 for so many reasons, five of which I'm going to share here in this post.

For those of you who haven't seen the film, Doctor Strange is about a brilliant surgeon named Doctor Stephen Strange. After suffering a devastating accident, his hands have permanent tremors preventing him from ever practicing. He spends all of his fortune on trying to fix them, but to no avail. As a last resort, he travels to a healer in Nepal who turns out to be part of an order of wizards. Magic seems to be the only way Strange's hands can heal, but he must fight his inner demons if he ever wishes to accomplish that.

1.) A Character Who Struggles with a Disability - Doctor Strange has to deal with tremors throughout the film. His hands constantly shake, which made mundane tasks like eating and even shaving difficult for him. It takes him most of the movie for him to gain his independence back. And still by the end of the film, his hands still shake. To me, that made him even more powerful of a character than before. He can be this amazing wizard and have a crippling disability.

How this can be applied to writing: Have you considered having a character who has a disability that doesn't heal, but they have to deal with throughout the entire story? This can add a really inspirational element to your character and give someone some relatability that they hadn't had in other stories.

2.) Dimensions - Dimensions are a super fun element that I feel hasn't been full taken advantage of until recent years in film because of the need for more advanced effects to achieve their full impact. The Doctor Strange universe has infinite dimensions as mentioned by the Ancient One. Dimensions are difference plains of existence that are often parallel to our own. There's a theory that there are infinite varieties of our own dimension.

In Doctor Strange, the wizards have the ability to travel dimensions (which is freaking amazing by the way). For example, they travel the Mirror Dimension which is where battles can be fought without affecting anyone or anything in the regular dimension.

How this can be applied to writing: Have you thought of using dimensions in your story? What kind of dimensions could you create?

3.) Unique Magic System - The magic system in his movie is so impressive and looks amazingly realistic onscreen. The wizards have to draw symbols in the air to create spells. They create portals with rings and certain hand motions. They can also use weapons to channel their magic. They can also travel the astral plain, which is basically like traveling as a ghost, but the ghost is only your mind while your body is somewhere else. All of this magic has a system, boundaries, continuity, and I've never seen another magic system quite like it.

How this can be applied to writing: Creating a magic system is different, but how can you make sure your magic system stands out from all of the others out there? One way to know if yours is unique is to keep informed about which magic systems are already out there, then know how you can make yours different. Since this is made up by you, the options are limitless. As long as your consistent with your magic, you're good to go.

4.) The Main Characters's Inner Fear - For Doctor Strange to be able to use magic and gain more control of his disability, he has to search within himself to discover what's holding him back. The thing he discovers is that his fear of failure are holding him back. He's so scared of failing that he won't do things he thinks he'll fail at. I wrote a whole Geekdom House post about this.

How this can be applied to writing: What does your character fear the most? How does that cripple them? I felt like after finding out Doctor Strange's inner fear, that I knew him in a way more personal way than before. His actions made sense and he become far deeper.

5.) Going Against a Character's Nature - At one point in the film Doctor Strange is forced to kill someone in self defense, but he is shocked and appalled at what he did. He is a doctor, trained to save lives. Taking someone's life was opposite to everything in him. At that moment, he decided he would never kill someone again.

How this can be applied to writing: What things go totally opposite to your characters' nature and why? Aang from Avatar: The Last Airbender couldn't kill Firelord Ozai because it went against everything the monks taught him. Matthias in Six of Crows is forced to kill wolves, which are sacred to his people.

Conclusion - Doctor Strange will definitely go down as one of my favorite Marvel movies and has given me so many plot bunnies! I can't wait to see more of Marvel's wizard!