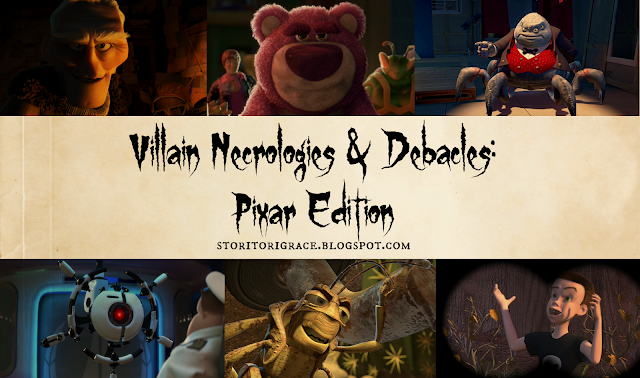 Villains meet their demises in so many different ways. For some this means death, for other this means an unfortunate incapacitating situation. Writers put a lot of thought into how their antagonist finally fails, but which way is best for your villain? That all depends on so many different circumstances, including audience and genre. This is what inspired my series "Villain Necrologies & Debacles." Over time, I'll be analyzing different animation studios, franchises, and more. These posts are meant to show you what sort of defeats have been done whether common or uncommon, perhaps inspire some villain defeats of your own, or you can just enjoy the morbid humor. Check out last month's Marvel Cinematic Universe Edition!

A lot of Pixar films actually don't have villains, but those that do have had memorable ones. Since Pixar has released less films, this is going to be a shorter list, but it's Pixar so I had to make an edition. Let's go!

Warning: Spoilers for all of the villains in those movies.

Villains that Lived
Arrested - This is a quite common defeat even in Pixar. Mister Waternoose from Monsters Inc. and Professor Zundapp had this consequence for their villainous actions.

Banished - Another quite common defeat it seems. Randall (Monsters Inc.), Stinky Pete (Toy Story 2), Lotso (Toy Story 3), and Skinner (Ratatouille) endured this fate. Why did I classify some of these as banishment? Well it's separation from the protagonists for an uncertain amount of time. Obviously, Stinky Pete never found his way back from that little girl with an affinity for markers and Barbies. 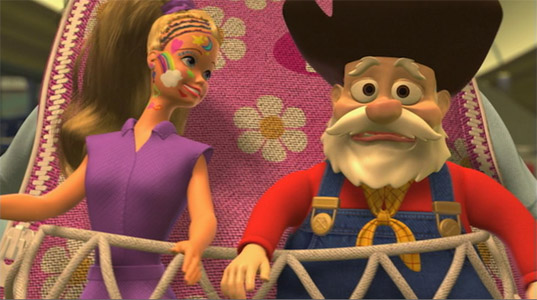 Deactivated - This only works with mechanical villains but Auto from Wall-E suffered the fate of deactivation, because he was a naughty robot.

Traumatized - This is the best way I can describe what the toys did to Sid from Toy Story. They scared the daylights out of him and now he can barely look at toys. Served the little pest right. This defeat can only work with kids for the most part.

Villains that Died
Eaten by a Bird - Pixar did not shy away from the villain deaths. Hopper from A Bug's Life was eaten by a bird in the end, a fitting end for a really mean grasshopper.

Falling off a Zeppelin - Charles F. Muntz met his end by plummeting to his death off of his own zeppelin. Falling to deaths seems very popular among films. 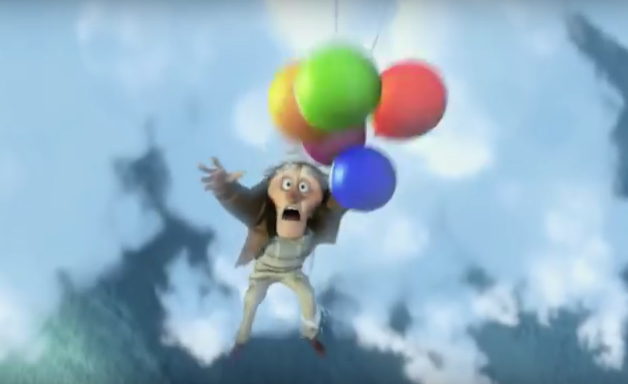 Sucked into a Jet Turbine - This is one of the more graphic deaths even if it is obscured. Syndrome from the Incredibles was sucked into a jet turbine because of his cape and then probably decapitated before being blown to pieces. Not a good way to go. XD 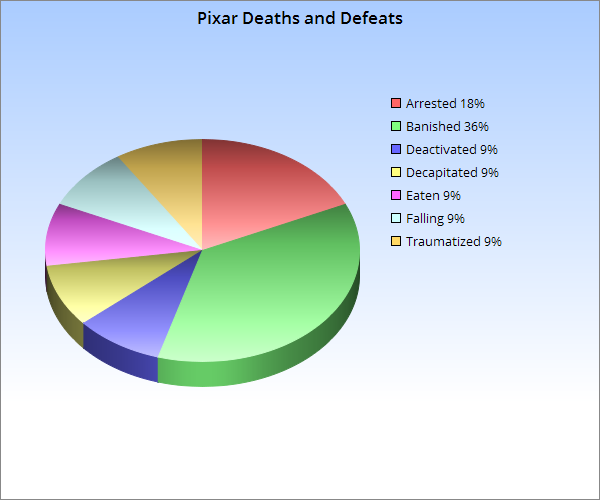 Pixar bumps up animal-related deaths and defeats, falling, and banishment up as more common defeats and deaths overall.
Conclusion - I think this bears some very interesting results for what deaths and defeats are the most common. Pixar has great films and great villain demises!

You may also like:
Villain Necrologies & Debacles: Marvel Cinematic Universe Edition
Villain Necrologies & Debacles: Disney Animation Edition
The Psychology of Writing: Villain Motivation and the CANE Model: A Guest Post by Casey Lynn Covel
How to Write a 3D Villain Part 1: How Did a Factor Cause Your Villain to Become a Villain?
How to Write a 3D Villain Part 2: What Event(s) Made Your Character Evil?