Writing Lessons from Movies: How to Train Your Dragon 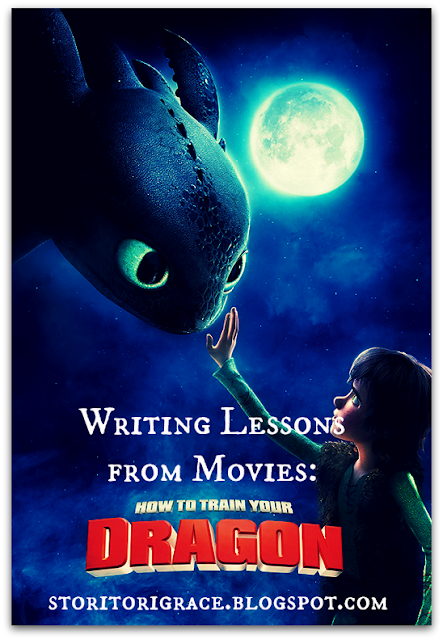 How to Train Your Dragon is one of the best animated films that's come out in the past ten years. Before I saw this film, it felt like the other children's animated features of the early 2010's were riddled with nothing but shallow plots and potty jokes. This film's animation is beautiful, the soundtrack breathtaking, and who couldn't love the characters? It also has some absolutely fantastic writing, which is why I'm highlighting it as this month's Writing Lessons.

1.) The Dragons Have Strength and Weaknesses - I love how detailed the dragons are. Each species has its own strengths and weaknesses, and then there are elements that apply to all dragons. Each species has so many volleys of firebreath. All species love a particular type of grass similar to catnip, aren't fireproof on the inside, and also will go limp if they're scratched under their jaw behind their ears. Zipplebacks have two heads with one head having poisonous gas and the other sparks, while nightfuries can fly at high speeds and have purple flame.

How this applies to writing: When you're creating a creature or taking a new twist on an existing mythical creature like this, think of their strengths and weaknesses. This will add a whole new level of realism to your creatures.

2.) The Antagonist wasn't a really a Bad Guy - Stoick is not a villainous person. Though we don't agree with his ideals, in the end he's a chief trying to a protect his clan and a father trying to protect his son, but he was the antagonist for the majority of the film as in he was the main foil to Hiccup's goals. He didn't agree with Hiccup's ways, thus when he found out what Hiccup was doing he tried to stop him--and even hurt Toothless. But as seen later in the film, Stoick loves his son more than anything and becomes an ally and a main character in the next film.

How this applies to writing: Your book's antagonist doesn't necessarily have to be a bad person. The point of the antagonist is to counter the protagonist's goals. The main thing is they don't agree with the protagonist. Their ideals, goals, etc. clash with each other, thus making them butt heads.

3.) Cuteness Equals Likeability - Toothless has to be the cutest sidekick I've ever seen. His catlike nature is just adorable. Anyone who's seen the film instantly falls in love with him within the first few minutes of Hiccup meeting him. You begin to care about him because he makes you smile and when he's hurt he breaks your heart.

How this applies to writing: One was to get your readers to love a character is to make them cute. Cuteness can come in many forms, but I think the main one is innocence. Even an innocent moment in a normally stern and mature character can instantly make someone like them. For example Sebastien in Black Butler is normally a very posh and upright character, but when he sees cats, he just melts into a fangirl of furries.

4.) The Main Character Acquires a Permanent Injury - At the end of the film, it's revealed that Hiccup sustained a sizeable injury when he fell into the Red Death's flames: he lost the lower half of his leg. He wakes up at the end of the film with a new prosthetic and now he has an injury to match Toothless's. This is a new challenge for him and something that can never fully heal, but it definitely adds something to Hiccup's character. It was also quite a twist at the end of the film, because no one saw this coming.

How this applies to writing: Have you thought of having one of your characters have a permanent injury like a loss of a limb or eye or the like? What challenges would it pose? How would it enhance their character?

5.) Characters with Prosthesis - Gobber has a two prosthesis, Hiccup makes a prosthetic fin for Toothless, and Hiccup in the end gets a prosthetic of his own. Each of these prosthesis have their own challenges. They can add conflict to a scene. For example, when Toothless's tail prosthesis is burned in the climax he can't fly at all. It also can come in handy like with Gobber who can put tools and weapons on his prosthesis. Prosthesis can add a level of coolness to your character. ;)

How this applies to writing: Have you thought of having characters with prosthesis? What kind of prosthesis would they have? Arm? Leg? Eye? Ear?

Conclusion - How to Train Your Dragon is an awesome movie with so many lessons and will definitely be classic for years to come!