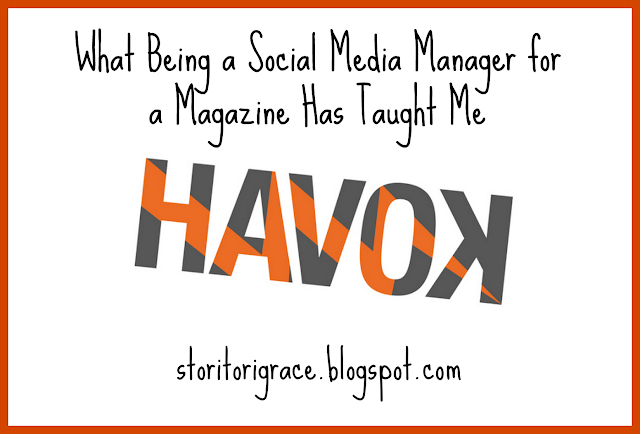 Last October I became the official social media manager for Splickety Havok Magazine. Since I've been with them for over six months I thought it's high time I do a post about the things I've learned while being one. A social media manager is the person who posts on Facebook, Twitter, Instagram, any social media account really for a company. Basically, I market stuff and build up relationships with my company's audience. So if you ever go to Splickety Havok's Facebook page and comment and the page replies, dat's me.  Same with their Twitter.

Splickety Havok is a flash fiction magazine. Flash fictions are stories that are 1000 words or less, and the writers are paid when they're published so if you're interested in submitting by all means check out the current themes. I met the founder of the company Ben Wolf years ago at the Florida Christian Writers Conference. Then two of my good friends became employees for the company, then I got published in Havok, and then I found out they needed a social media manager. I wanted more experience on managing social media, so I decided to apply then I ended up getting the job. 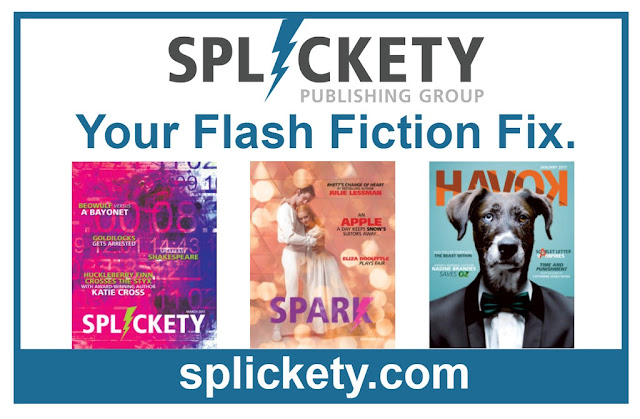 1.) You Need to Post Every Day, EVERY DAY - I post on the Havok Facebook and Twitter every day. People in general have tiny attention spans and if you don't post for one day some people will just unlike you. People are weird. This sounds like it makes you someone who's constantly on social media all the freaking time. Thanks to scheduling this isn't true. I just schedule my tweets and posts once a day or schedule them a week in advance. I also schedule them at the same time every time so people know when to expect more content. Consistency is very important.
2.) There's this Thing Called Tweetdeck - Maybe you knew about this maybe you didn't, but there's this wonderful site for businesses called Tweetdeck, where you can actually schedule your tweets. I KNOW IT'S REVOLUTIONARY! You can schedule your tweets ahead, which really makes life easier. It works just like regular tweeting except your can schedule. This really helps so you can do a bunch of social media in one day so something is scheduled every day but you're not on Twitter every single day.

3.) There's This Thing called Bitly - Do you ever see tiny scrunched up links to stuff on people's posts and wonder how the heck they do that? I'm about to rock your world. You know how there are some links that seem like they're a million miles long (*coughs* Amazon) and then they eat up your Twitter characters or look just plain sloppy on a post? Never fear! Just go to Bitly.com, post the link in the bar and it shortens it into a cute concise little nugget!

4.) You Can Make Links Magically Disappear but Still Have an Image Link on Facebook - It looks kind of awkward to have a link along with the big image link. 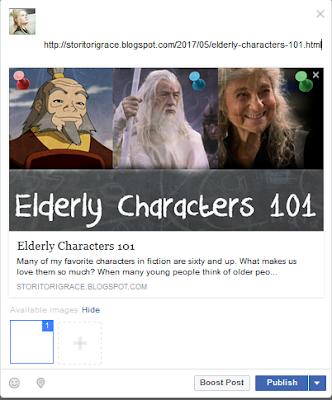 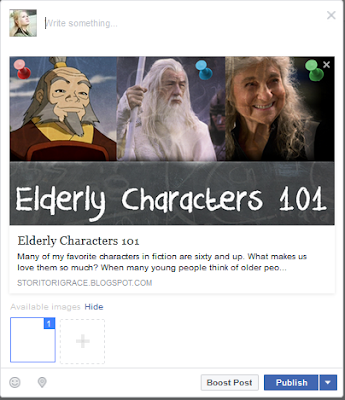 Literally all you have to do is delete the link and the image link stays, so you get this crisp professional look. Also another note on links, make sure you provide one when you're posting about something that you need actually go to a link to get to. Ain't nobody got time to search for the link you're talking about.

5.) Images Attract People - People will often just scan over bare links. They don't catch your eye, but stick an image with it and people are way more likely to stop and look at what you're posting. For example, people will get tired of me reminding them about the upcoming submission guidelines for the magazine over and over again with the same link, but if I post a funny meme then put the link to the submission guidelines as a Bitly link in the post, it attracts way more people. 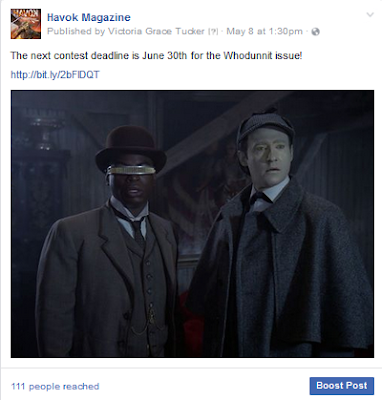 6.) Hashtag Happy - I know. I know. I know. Hashtags can seem super lame and not to mention annoying. The purpose of hashtags is to put posts in a group to be found. People will click on hashtags and see posts with the hashtags. Hashtags are basically to get your posts exposure. Hashtags are not as effective on Facebook, but they're essential on Twitter and Instagram. Once a posted a photo on Instagram and I forgot to put the hashtags and it barely got any likes. Any other posts with hashtags got a decent amount of likes. So remember to provide the hashtags.

7.) Posting on Social Media All the Time is Definitely Work - If you haven't gathered already, posting on social media is definitely a job. It's not just duckfaces and telling everyone what you ate today, it's building a relationship with your audience and promoting your content. Most marketing is done through social media nowadays, which is why literally every company has at least one social media page. It may seem like a trivial job to some, but it's essential for marketing.

Conclusion - A lot of these things I've learned, I actually use for my own professional social media now, which makes maintaining my accounts so much easier and flourish. Building an author platform is important and you do that by knowing how to navigate the crazy world of social media.

You may also like:
What Being an Editor for a Website has Taught Me
What Being a Staff Writer has Taught Me
Why Reading Regularly is Essential to Being a Good Writer
How to Be a Proper Brainstorm Buddy
Why a Writer Should Travel: Quell Your Fears and Embrace Inspiration
Posted by Victoria Grace Howell at 1:00:00 PM