So Your Character is From Poland ... Featuring Ola @ Ola Reads Books 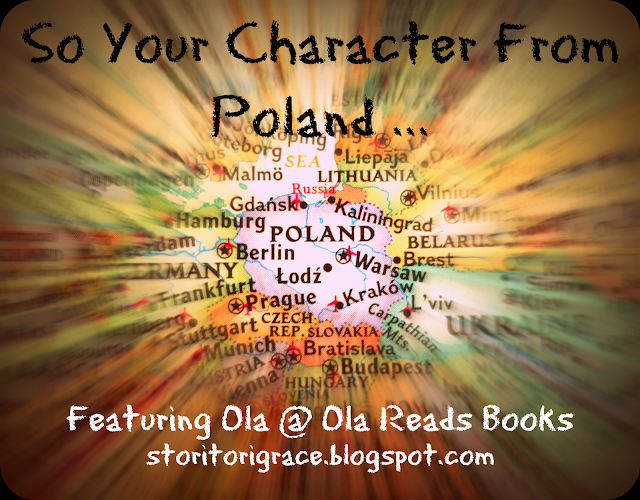 It's time for this week's So Your Character is ... Post! This is a weekly segment where I interview lovely volunteers from around the world to give you a firsthand account of being a citizen of their respective country or having a disability. I'm hoping to encourage international diversity, break stereotypes, and give writers a crash course on how to write a character from these different places on our planet. If you haven't checked out last week's  So Your Character is from Kenya ... be sure to hop on over there and give it a read!

I found a couple months ago that I'm a quarter Polish (This explains my love for borscht and pierogies), so this post is super timely! My great grandparents came over from Poland, so I'm super excited to learn more about this country!


Disclaimer: The content below may be culturally shocking to some. Each of these posts is as uncensored as possible to preserve the authenticity of the cultures of each of the interviewees.


I’m Ola and I’m from Poland. I live in Warsaw, which is a capital city of Poland. I moved here to study and stayed after I graduated for work. My hometown, where I was raised and where my parents still live is in the north-west part of my country, not far from a seaside. I work in a technology department in an international banking corporation. I love books and traveling. I prefer traveling to northern countries, like Finland and Iceland.
Blog


What I believe is unique for Poland is how we celebrate, we often have some very elaborate traditional ways to celebrate weddings, Christmas and Easter, and there are differences to these celebrations depending on the part of the country. I was brought up in a region that is considered ‘plain’, which means that we don’t have unusual traditions, food, language. etc. specific to us. I believe that's the case because most the f people living here are not native to this region. My grandfather for example was displaced from Lvov (which at the time was part of Poland).

But back to the celebrations – Easter Monday for us is a ‘Wet Monday’ (in Polish ‘Lany Poniedziałek’ or ‘Śmingus Dyngus’), where we throw water on each other. Also, on Saturday before Easter we go to church with baskets full of food to have it blessed. During Christmas, the most importnt day for us is Christmas Eve, this is the night when the whole family meets, we share opłatek (that’s a sort of thin wafer) which each other and sit at a table with twelve dishes (no meat allowed).  This is also the day when we get the presents–depending on part of the country the gifts are brought by Santa Clause, Jack Frost, or Baby Jesus. 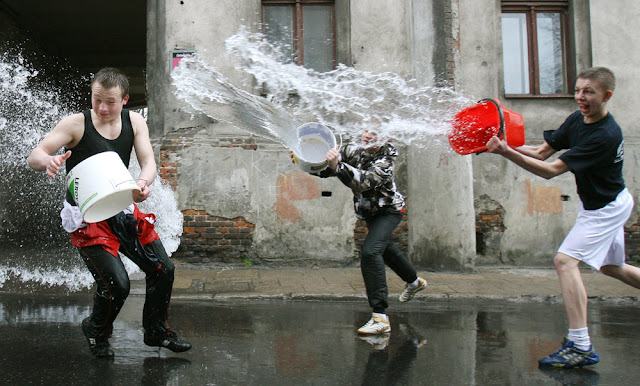 Tell me about your country's environment. What are some of your favorite places?
What is brilliant about Poland is the location–we have access to the sea and mountains. So without living a country you can go skiing and swimming in the sea. For Americans, it may seem normal, but this is not the case in Europe. We also have a beautiful Lake District, but I’ve never been there and cannot say much about it. I cannot say much about Poland’s environment and my favorite places because I haven’t traveled a lot within my country and I’m not an outdoorsy person. 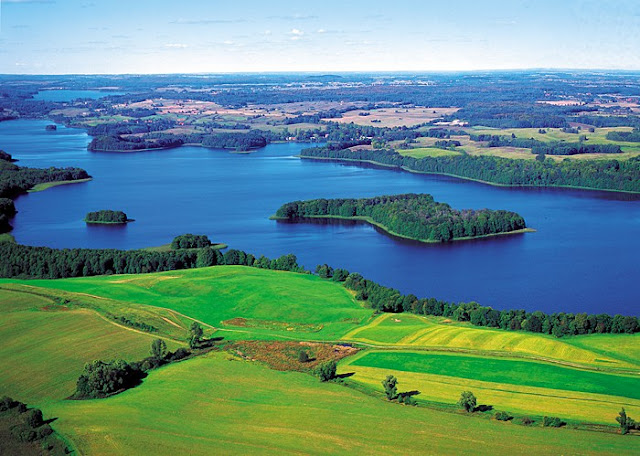 Tell me about your country's food. What are some of your favorite dishes?
Polish cuisine is full of fat and meat. Pork and beef are really popular in the traditional dishes, but if you look a bit deeper into the history of Polish food then you’ll find a lot of poultry dishes. Potatoes and cabbages are popular. My favorite traditional Polish dish is pierogi, those are dumplings with various sweet or savory stuffing. My favourite stuffing is mashed potatoes, fried onions, and quark. When it comes to modern Polish food, what regular people are eating, we are very much up to world’s trends, with vegetarianism and veganism trading right now. 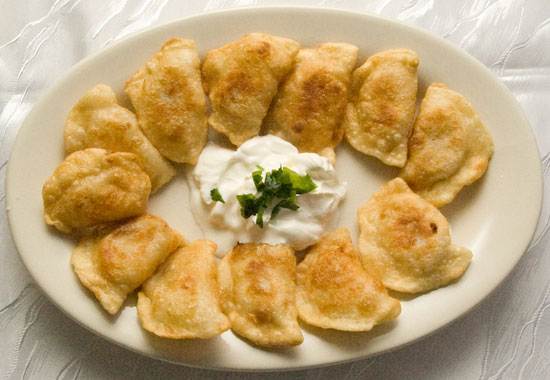 Tell me about any different speech patterns in your country. Slang? Idioms? Words for things such as “biscuits” instead of “cookies”?
It’s tough to compare absolutely two different languages. Let’s start with the alphabet – Polish has eight letters that are not in your alphabet, and we don’t use x and v. Extra letters we have are: ą, ć, ę, ł, ń, ó, ś, ź, ż. In speech letters ó and u make the same sound, but in different words you must use either first or second letter. We also have seven grammatical cases, so one word can have all different variations based on the noun, adjective, pronoun, and whatnot. For example, word book – in English in singular form it is always spelled the same. In Polish, however we have: książka, książki, książce, książkę, książko.

Describe briefly a regular day in your country.
In bigger cities, most people start work at 9 a.m. and work till 5 pm. In smaller cities people working at offices often start at 8 am and work eight hours. Kids and teen start school mostly start school at 8 am, and have five to eight 45 minute classes in a day. After you come back from school or work, you eat dinner–this is popular among families with kids, and people that finish work around 3 pm. Dinner is usually eaten around 3 pm, and will consist of two courses – soup and main dish of meat, stretch and vegetable.

After dinner, you will watch TV or read to relax, then you will do some home choirs. Supper is eaten after 7 pm. After the last meal, you will play with kids, watch TV, read. Going out during work week is not popular outside the biggest cities in Poland. Cafes, pubs and restaurants are almost nonexistent in majority of Polish towns. Life looks completely different in Warsaw, where lifestyle is very like the American lifestyle. 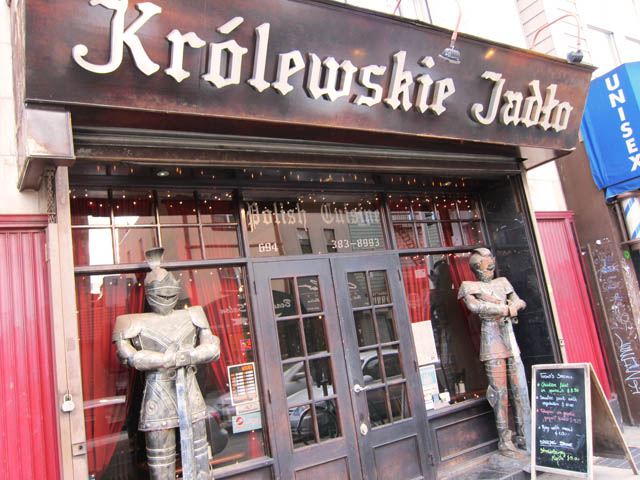 How does your country compare to others, especially the States since my audience is primarily American? Environmentally? Politically? Culturally?
Most of the Polish people consider Americans ‘fake’, meaning that they just too happy and positive, that they seem to never say what they think. Poles tend to be pessimistic and negative. When you ask how are you, we will start complaining. I’m not sure how this compares to Americans, but Polish people don’t like talking to strangers, they won’t be chatting up cashier in a supermarket. They just want to finish their business with minimum interaction with humans possible. We also don’t use ‘please’ and ‘thank you’ so much.

Briefly describe three of your country’s historical events that you feel are important.
1. Partition of Poland – At the end of 18th century Poland was wiped out from Europe’s maps for 123 years. Poland’s land was taken over by Russian Empire, the Kingdom of Prussia and Habsburg Austria. In 1918 Poland restored its sovereignty, and now on 11th November, we are celebrating National Independence Day to commemorate this moment in our history.

2. World War II - Poland was invaded by Nazi Germany and Soviet Union. On Polish grounds, Nazi Germany built their concentration camps. Warsaw was completely destroyed. It's impossible to write shortly how devastating for world and Poland this time in history was. It definitely had a huge impact on  Poland and it's people.

3. Communist Poland. In years 1952 till 1990 Poland was under Communist control, which was a dire time for Polish people and is still live in memories of many Poles. Food was available with ration cards only, shops were empty, and anytime something appeared on shop’s shelves people were queuing for hours. 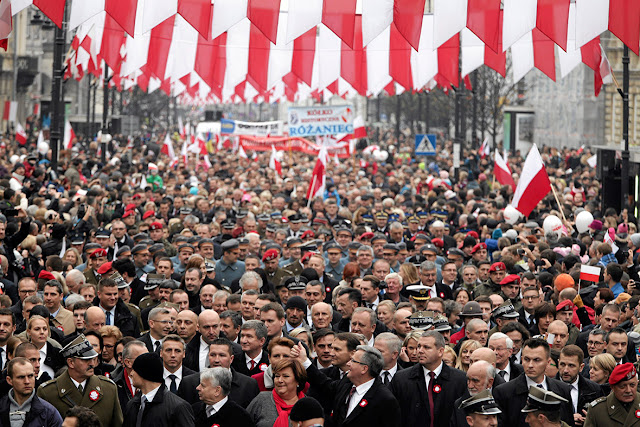 What are some stereotypes about your country that irk you? What media portrays your country badly be it a movie, a book, or a TV show?
Poles are not a popularly portrayed in English entertainment. The only Polish character in American TV Show I know is Sophie Kachinsky from show 2 Broke Girls. Anything she says about her family and life back in Poland is just ridiculous, but the whole character is ridiculous so it makes sense. I did some Googling and found out the there is a American movie from 1998 called Polish Wedding, and comments from Poles that have seen it all say the same–this portrayal of Poland is outrageous. 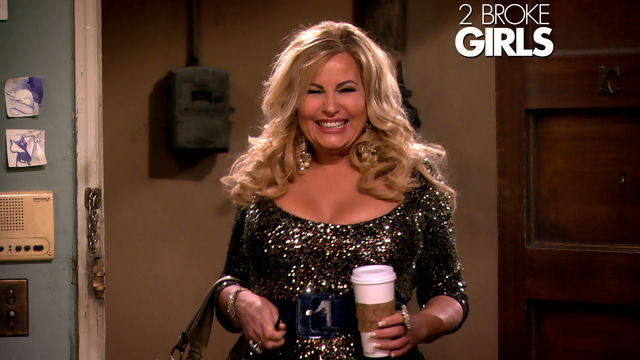 What media portrays your country well be it a movie, a book, or a TV show?
I don’t know any, and I couldn’t find anything. Poland is not appearing very often in American movies and books, so it would be hard to find a good representation. However, I can recommend some very good books of Polish history written by British author–Norman Davie’s books Rising ’44: The Battle of Warsaw, God’s Playground. If we’re looking at Polish movies, then I can recommend older comedies that are a good representations of Polish mentality–Sami Swoi, Jak rozpętałem II Wojnę Światową, Seksmisja, Miś, Kiler, Chłopak nie płaczą. 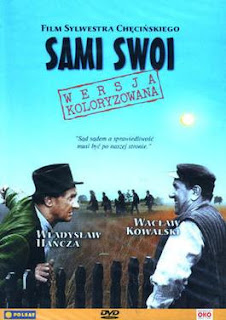 Who are your top three favorite characters native to your country in books, movies, or shows?
Izabella Łącka and Stanisław Wokulski in book The Doll by Bolesław Prus. The book tries to portray the whole Polish society of 19th century, so if you’re writing historical fiction, this book will help you understand Poland at that time in history. The main storyline is a relationship of Izabella and Stanisław, two people with different social statuses. He is a self made man, from lower class that aspires to be included in higher class because of his newly earned wealth. She is spoiled daughter of rich man, that loves to play with man and their emotions.

Szacki from book A Grain of Truth by Zygmun Miłoszewski. Szacki is a state prosecutor in Warsaw, he’s very intelligent and full of faults. I belive that Warsaw and Poland is reflected accurately in those novels, of course I don’t include in that crime that is represented in the books. I mean relationships in work and family, and life outside of work. 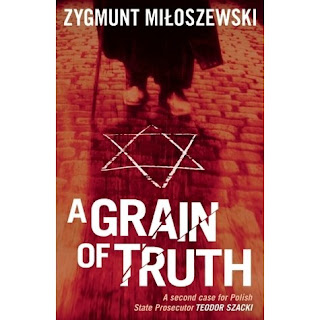 Thank you, Ola, for this very informative post! Come back next week for a post all about The Czech Republic!

Are you interested in participating in this project? Check out the tips archive to see which countries have been filled and if you're from a different country, shoot me an email at howellvictoriagrace(a)gmail(dot)com. I'm especially looking for Cuba, Venezuela, Switzerland, Zimbabwe, Iraq, and Egypt.

Do you have any characters from Poland? Did this inspire you to write a Polish character or set a book in Poland? Are from this or been to this country and you have further input? Feel free to share! Do you have any questions for Ola? Be sure to thank her!