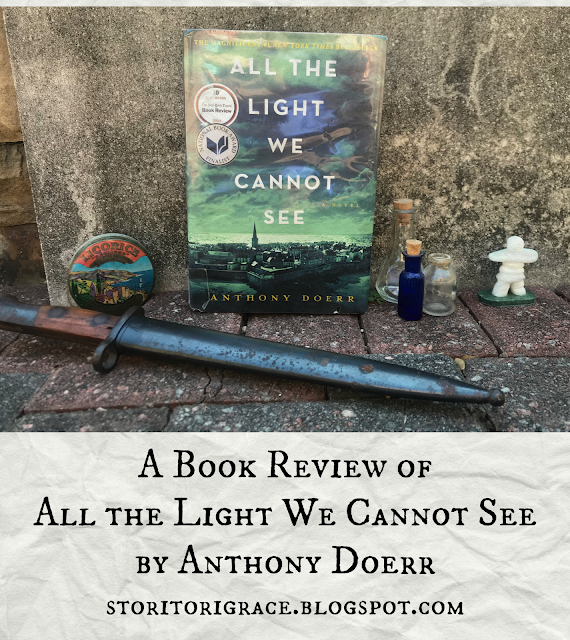 Marie-Laure lives in Paris near the Museum of Natural History, where her father works. When she is twelve, the Nazis occupy Paris and father and daughter flee to the walled citadel of Saint-Malo, where Marie-Laure’s reclusive great uncle lives in a tall house by the sea. With them they carry what might be the museum’s most valuable and dangerous jewel.

In a mining town in Germany, Werner Pfennig, an orphan, grows up with his younger sister, enchanted by a crude radio they find that brings them news and stories from places they have never seen or imagined. Werner becomes an expert at building and fixing these crucial new instruments and is enlisted to use his talent to track down the resistance. Deftly interweaving the lives of Marie-Laure and Werner, Doerr illuminates the ways, against all odds, people try to be good to one another.

I had a friend push me to read this one and I'm so glad I did! I haven't read historical fiction in a while and this is such a beautifully written book!


The Plot: The plot is slow and takes place over years, but it's never boring. A legendary cursed jewel called the Sea of Flames and a children’s radio broadcast connects each of the points of views which is a really intriguing factor. It follows the before, during, and after experiences of three people in the World War II era. There are a few other scattered POVs but there are three main ones. The prose is so pretty and carefully crafted. It flows so well and it feels so true to the time period.


We are mice and the sky sails with hawks.

There are definitely many subtle chilling moments in the story but it’s never overblown and it subtly makes it even more powerful. For example,  Von Rumpel is an expert on jewelry and when he’s going through the wedding rings of captured Jews so flippantly it sends chills down your spine. There are also so many acts of subtle defiance. There aren’t any guns blazing but the subtle acts that the characters do to show that they have hope for a better world is inspiring.

My only dislike of the book is the ending for some of the characters. I know they’re realistic but it’s just sad.


The Characters: Because this book takes place over such a long time, you get to know each character so well. You watch them grow up.

Marie-Laure is such an interesting character. I love her fascination with the tea and one of her favorite animals being snails. It’s a dangerous world for a blind girl especially when she’s away from what’s familiar but she manages to survive and thrive.

She goes blind as a young girl and she has to completely change how she lives, but her Papa is so awesome in how he's so optimistic and open to making sure she can be an independent woman despite her handicap. He helps teach her how to get around the city by counting steps and letting her feel a model of the city. He also puts things in the same place in the house so she can find everything she needs and teachers her what different objects are from just the feel of them. He also helps her learn how to read Braille books and she falls in love with 2,000 Leagues Under the Sea. It's so fascinating and I just love him.

Uncle Etienne is great too. He has a wonderful character arc and you just feel so proud of him. I also love Madame Manec. She’s awesome too. I also really love Frederick and his fascination with birds. His courage and endurance are so admirable. But he’s also so tragic.


“Your problem Werner,” Frederick says,” is that you still believe you own your life.”

Werner is a very difficult character to write. As expected, he becomes a Nazi and he witnesses and does horrible things, so he's an easy character to dislike as he makes bad decision after bad decision, but yet every decision he makes is logical. By the time he realizes what he's gotten himself into it's too late for him to leave. But I love his love for knowledge and his knack with machines. He has so much potential.

Von Rumpel I suppose would be the villain of the story and it’s interesting because he’s a man fighting cancer through the majority of the book.

The Setting: I love how the book goes into less common settings for most World War II stories. Many focus on concentration camps, but none are actually shown in this book. The bulk of the story takes place in Germany and France. Showing Germany as a war-torn land post-World War I really helped put into perspective about Germany's plight before the Nazi regime.

The Theme: Hope is a big theme. Many characters struggle with hope, lose hope, and find hope in unexpected ways.

Content Cautions: This is a book about World War II and though there aren't any concentration camps shown there's still some very mature content depicted though it's done in a very tasteful way. Teenagers abuse and bully each other severely to the point of abluting on the victim's possessions, beating a boy beyond recognition, and implying the intent to rape a boy with a gesture. Boys freeze a man to death by dumping pails of water on him in the winter and then celebrate his demise and leave his corpse there for days.

A train is piled high with dead bodies in sacks. Germans loot a home and murder the residents, including a dog. Guys get their crotches examined. A character takes clothes from prisoners in winter condemning them to freeze to death. A man's eyelids frostbite to the point of falling off. The Germans make some vulgar sexual jokes. Werner has some disturbing visions while on the front. There are rumors of mother’s drowning their daughters so they won’t be raped to death.

The most mature part is when an old woman and several young girls are gang raped by some men. It isn’t explicitly described but it’s very chilling nonetheless.

1.) Blind POV - Doerr wrote Marie-Laure's POV so well. I really felt like I was in the world of a blind woman. It was so interesting to taste, smell, feel vibrations and sensations, and hear, but not see.

How this can be applied to writing: If you want to write a blind POV, I highly recommend reading this book.

*SPOILERS*
2.) A Fate Worse Than Death - Frederick falls to a horrible fate. While in school he's bullied brutally for months on end and then the final blow occurs offscreen when Frederick is beaten so bad by some evil boys that he actually sustains brain damage. He no longer can talk about the birds or take care of himself. He's a shadow of what he once was. For Werner, this was worse than if he had died. Thankfully at the end of the book, there's some hope for dear Frederick, but the poor boy suffered so much.

How this can be applied to writing: Sometimes death isn't the worst thing that can happen to a character. Sustaining brain damage, losing memories, or becoming comatose can be worse than death for them and for their loved ones. It's a terrible thing, but guys, it's good conflict.

3.) Single Father - Papa is a single father because Marie-Laure's mother died when she was young. He's such an amazing father and does everything he can to provide for his daughter. He protects her and takes care of her.

How this can be applied to writing: It's so refreshing to see a wonderful father figure and a single father which are a little hard to find. He's such a great example.

4.) Language Barrier - Near the end of the book when two characters meet whose first languages are different it's really intriguing how Doerr wrote this by changing how the other one perceives what the other is saying depending on the POV. One POV could understand the other, while a different one had trouble. It's really neat and realistic.

How this can be applied to writing: In stories, some people speak different languages and it can be tricky to figure out how to portray this in a deep point of view while sounding natural. Doerr did an excellent job at this.

Conclusion: This is a really beautiful read. I highly recommend it. 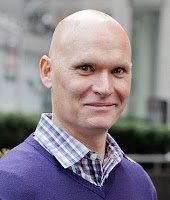 About the Author: Anthony Doerr is the author of the Pulitzer Prize-winning novel All the Light We Cannot See. He is also the author of two story collections Memory Wall and The Shell Collector, the novel About Grace, and the memoir Four Seasons in Rome. He has won four O. Henry Prizes, the Rome Prize, the New York Public Library’s Young Lions Award, the National Magazine Award for fiction, a Guggenheim Fellowship, and the Story Prize. Doerr lives in Boise, Idaho, with his wife and two sons.