Keeping Morality in Fiction: What’s the Line Between Realistic and Gratuitous Fiction? 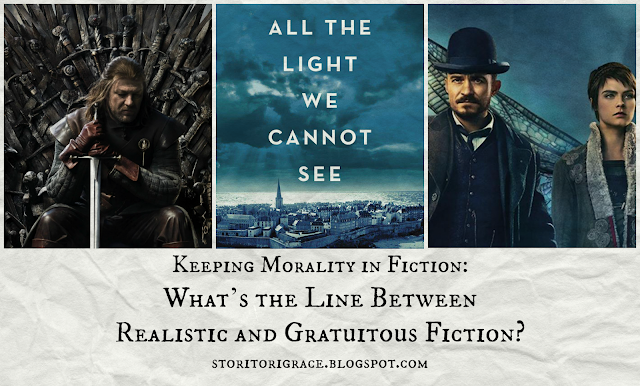 Humanity has committed every sin imaginable in our existence. No race, gender, location, or era is exempt. But are we as writers, artists, and creators obligated to show the dregs of humanity in order to be realistic? Fantasy, crime, and other spec-fic genre writers feel pressure to do this, but historical fiction writers feel it, even more, when they decide to stray away from more ordinary life stories. Can we write realistic stories without showing graphic detail? When does content cross from realistic to gratuitous?

Warning: I will be discussing mature content concerning violence, drugs, and rape in a little more detail than I do normally. No graphic imagery is shown (I mean that would defeat my point), but I will be touching on these subjects heavily. Reader discretion advised.

Also spoilers for All the Light We Cannot See, The Scent of Her Soul, Game of Thrones, The Handmaid's Tale, and Carnival Row.

1.) Profanity - Let's be real. A lot of people outside of religious communities swear all the time. My co-workers swear every color of the rainbow daily. A lot of books and movies will mimic this behavior by having profanity ad nauseum. In the 5th Wave, there was swearing ALL. THE. TIME. In the main character's POV. It was extremely annoying. Honestly, I find it annoying in real life as well. In Game of Thrones, any time sex was mentioned they said its swear word counterpart and anytime men or women's genitalia could possibly come up in a conversation they used the ... non-scientific terms.

In this day and age, language is so cheapened. Words that would make people gasp or express literal points are now used flippantly. I believe swearing can be used to add some realism and even severe swearing can make a striking point, but if swearing is used in nearly every sentence it's then cheapened. You can't use it to hammer home a point because it's like any other word.

Bryan Davis (who is one of the most Christian men I know) used swearing in the dialogue for the sex traffickers and others in The Scent of Her Soul and primarily in the latter half of the book. Sex traffickers aren't going to hold their tongues and sometimes it's really hard not to insert a swear into dialogue without looking obviously like you're dodging.

Swearing can be avoided all together though. You can write a story that has characters who would swear without strewing dialogue with cuss words. When I was at Realm Makers this past July I overheard a conversation during one of my script classes about some scriptwriters being hesitant about writing profanity into their scripts to pitch to Hollywood. The assistant to the teacher replied. "Have you seen the film Sergeant York? In it, Sergeant York nor the other soldiers never swear. Did you doubt the realism of their characters?" Sergeant York is a great movie. I highly recommend it.

If your readers can still read the book and believe in the reality of your character then no swearing is needed.

2.) Sex & Rape - Sex is not a bad thing. I haven't had it yet, but from what I've heard from my married friends it's great. But sex scenes are in media A LOT and in shows like Game of Thrones, The Handmaid's Tale, and Carnival Row the actors are practically having sex on screen or they may actually be having sex. I don't want to know, but basically, nothing is hidden. In the later Throne of Glass books there are multiple very detailed pages long sex scenes where I learned things I did not need to know and I skipped through much of these. All of these really crossed the line into gratuity in their portrayals of intercourse.

Adults have sex and that's a reality but do we really need a five-minute or pages long scene showing every single detail of it? I'm sure it's wonderful, but it's a private, intimate act. When it's shown in this much detail whether that be in writing or on television it strays into pornography and erotica. Both of these are designed to arouse others and have devastating psychological consequences. I could not watch the sex scenes in any of these listed shows because I have no desire to see that. I just skipped them. Carnival Row didn't even need all of the sex scenes. If you edited them out, then you wouldn't know a difference in the show. In Game of Thrones, there are entire monologues done while somebody is having sex and rape scenes of heterosexual, homosexual, and incestual partners are shown so often that it's desensitizing. Handmaid's Tale I excuse more because the whole story is about handmaids, but you still don't have to show every detail of the rape scenes.

In All the Light We Cannot See by Anthony Doerr there is a scene where an elderly woman and several young girls are raped. It's horrible. It's traumatizing, but the author did not show the act done in detail and that made it more powerful. We don't need to know the details. Our minds fill in the picture. In The Scent of Her Soul by B. Allen Davis the story revolves around sex trafficking so this has to be included in some way. He did a great job of showing the devastation of rape without being explicit. I have a sexually abused character in one of my books and there is a scene where he has sex with his abuser, but I don't go into massive detail.

There's nothing wrong with writing these realities into our stories especially when it comes to crime and historical fiction, but there's a way to do it without boosting a rating to R. 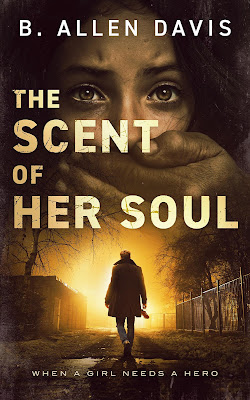 3.) Violence - Violence is a reality. It's unavoidable whether it be war or theft or self-defense or domestic abuse. And let's be real (as we have been with most of this post if you've made it this far) it's kinda fun to watch and read about because there's a lot of skill that goes into fighting and excitement and tension as we wonder if the characters are going to live past this battle and defeat the villain. Violence is also brutal. It's not pretty. Blood and gore are involved and there are many abominable forms of violence besides combat like cannibalism, human sacrifice, executions, and torture. Humanity has indulged in all of these, but we don't need to show brain matter, intestines, and limbs flying to make it realistic.

Game of Thrones basically shows any manner of violence you could possibly ever dream of someone participating in and they show it in all of the detail. They also seem to find the most gruesome ways of killing someone like stabbing someone through the eye or crushing someone's skull between their hands. Soldiers and civilians alike in warzones get PTSD from witnessing violence. Why is it put in display in all accurate detail for all to see? I also did not watch all of the gruesome scenes in any of these shows, but I would not be surprised if someone or more than someone legitimately was affected mentally from watching these shows, by either in the way of fear like with PTSD or anxiety or made more numb and apathetic when it comes to violence. Both are horribly damaging. 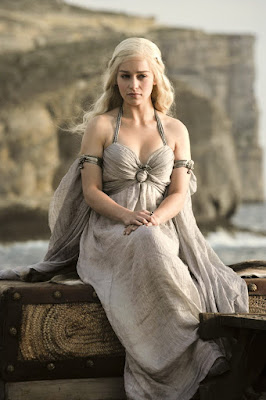 The Hunger Games does a great job in the books and the movies at showing the brutality of killing without glorifying it or shying away from it. It mentions some more graphic acts such as slitting throats, limbs being blown off, and intestines falling out of a character's stomach, but it doesn't portray that in great detail. And Then There Were None by Agatha Christie mentions gory murders but none of it in detail either.  Avatar: The Last Airbender cuts away before characters are burned gruesomely or even to death. In movies and shows, just an angling of a camera can imply the terrible demise of a character without giving the viewer nightmares. 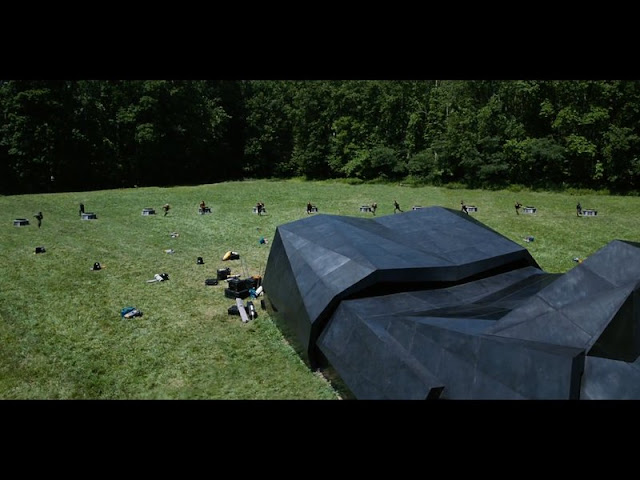 Conclusion - I know some of you may be thinking why I've even watched and read a lot of this stuff. Part of it is because I'm paid by my writing jobs to keep up with the culture and part of it is because many of these stories have great writing. I just wish they were cleaner. With Game of Thrones over shows are trying to copy the shocking content factor and it seems like the theaters are taken over by Rated R films. I just wish this trend would stop. So many audience-members are blocked from seeing so many potentially good films because they have to litter all of them with the worst possible content.

There are so many PG-13 and PG movies that show mature content in a way that isn't pornographic or warmongering or sailor-mouthed. I know I'm preaching to the choir here and I don't want movies and books and shows to be all G and PG because that's just not the way things are, but there's a respectful way to show the realities of life and then there's an explicit way to show those realities. And that line has to be drawn. And maybe someone out there (maybe you) will read this and realize that fact.

What is your opinion on levels of content? What do you believe the line between realistic and gratuitous fiction is? What stories do you believe maintain that line well?