Writing Lessons from Movies: Spirit: Stallion of the Cimarron 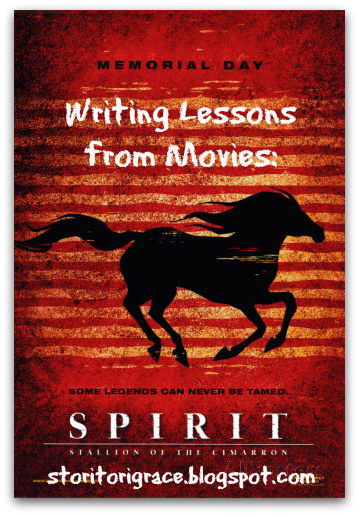 Any horse lover born in the nineties has watched this movie. It's basically the old west version of Black Beauty, but you have to love Spirit's well spirit and the fantastic soundtrack by Hans Zimmer and Bryan Adams. Yes, "You Can't Take Me" is playing in my head while writing this. This touching story recounts the tale of a wild mustang and his adventure after being captured by the military to be used in the cavalry. While watching this movie recently, I noticed a lot of great points this story has for writing an animal's point of view. I thought this could be incredibly useful post if you're writing from the point of view of a real life animal or if you're writing in the head of a mythical beast perhaps.

1.) A Story Told Through An Animal But Not a Humanized Animal - Anthropomorphic characters are very common in children's films, but let's face it most of these are basically humans in fur (Zootopia, Disney's animated Robin Hood). Animals think differently than humans. One thing I like about Spirit is that he really sounds like a horse. He calls humans "two legs" and females "mares."  His goals are what a horse would want: freedom to run and take care of his herd.


2.) Animal Emotions - Animals express themselves different than humans primarily because of their physiology. They can't hold hands or give hugs. So how does this film connect its animal characters to its human viewers? Horses communicate anger by snorts, stomps, baring their teeth, laying back their ears, and even attacking. Horses communicate love by rubbing against another horse and touching foreheads with them. Horses communicate happiness by happy whinnies and lighter steps. Though, the animators added eyebrows to the horses to further their expressive capability, even without that addition, we can clearly see the emotions of these creatures.

How this can be applied to writing: Every animal communicates differently. Dogs wag their tails when happy. Cats purr when happy. Anoles change to green when happy and warm and brown when cold and sad. When portraying an animal character, watch videos of animals and study how their express themselves. Studying them in real life is even better. My character Bryce in my book Subsapien has a lot of cat like mannerisms. I've actually taken a lot of inspiration from my own cat to make his demeanor more feline.

3.) Human Goals Conflicting with Animal Goals - As I mentioned before, animal's think differently, often this is so differently it clashes with our species' goals. In Spirit, the humans want to build a train that goes straight through Spirit's territory, endangering his herd. Each goal is pretty benign in their own right, but they conflict with the races' respective interests, thus causing conflict. The Colonel wants to tame Spirit to be used for his army, but Spirit has none of it, because he wants to go back to his family. Conflict.

How this can be applied to writing: Great conflict can be created with an animal character when another race's goals clash with theirs. Humans and animals have a lot of differences. How can you use those differences to your advantage?

4.) Communication Without Words - In many sequences in Spirit, there aren't any words exchanged, not even a narration from Spirit, yet you can visually see what the characters are expressing. Sometimes these moments are powerful, because there are no words. One sequence is when Rain is shot and falls down a waterfall. Spirit finds her at the bottom and lays next to her. Horses seldom lay down. When a horse lays down it's usually because something is wrong. He stays with her in this vulnerable laid down position, showing his commitment and love for her. When humans come to take him away, he rubs his head against her, and when the humans drag him from her, both Spirit and Rain whinny at each other and it's heartbreaking, yet not a word between them is spoken.

How this can be applied to writing: Though a scene with no words can be certainly applied to writing animals, it can also be effective for writing humans. At times, words don't need to be exchanged to show how we feel. Sometimes it's magical when we don't need words to know exactly what someone is thinking. Never underestimate the power of silence.

5.) Using Hair to Show the Passage of Time - When Spirit is captured by humans, the men trim his hair into a military horse cut. Overtime, we see the progression of his hair growing longer. It takes a while for hair to grow and using this aesthetic we can see that a lot of time has passed for his hair to get that long again.

How this can be applied to writing: Using hair to show passing time doesn't have to be just used for animals, but humans too. The Divergent series uses this with Tris's hair to show the weeks going by.

If you haven't seen Spirit: Stallion of the Cimarron, I encourage you to give a watch, especially if you're writing an animal character. Thanks for reading!

Have you seen Spirit: Stallion of the Cimarron? Have you noticed these writing aspects? What movies have you noticed have good writing? Let's geek out together!