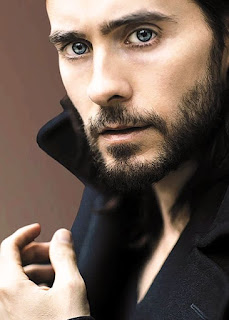 Because of the overwhelming response with Harlowe in last month's BP, I've decided to interview him this month! He is an antihero character from my high fantasy series that I'm debating on rewriting for NaNoWriMo. Decisions ... Let me tell you a bit about him!

Harlowe is a twenty-two-year-old shapeshifting sorcerer. In his world Stars are sentient beings and he is half Star, known in his world as Starbloods, but his other half is shapeshifter, leaving him without a trace of human blood. His born abilities are shapeshifting into a hound, telekinesis, telepathy, and the ability to control burning starlight. However, at the coercion of the evil full Star Vanmoriel, he can access forbidden abilities as well. One of these was the expansion of his shapeshifting abilities, allowing him to change into any form he can desire--at the the expense of his sanity. Daily, Harlowe struggles with the dozens of minds from his different forms with the real possibility of losing himself among them.

He grew up in the primitive land of Melorain among a Native American-like race called Tsutegowa with his parents. But after the death of his mother and father, Vanmoriel took him under her wing and turned him into the most powerful sorcerer living besides her to groom him to be part of the anti-prophecy. When he was twelve, she convinced him to participate in a spell that has mentally bonded to two together, imprisoning him wherever he goes. He can never leave her or escape her thoughts or her control. The only way to break the bond is if she dies, and she won't let him kill her.

Over the years, he has grown to hate Vanmoriel for what she's done to him, and he seeks to manipulate the two chosen ones of the prophecy to kill her while in the mean time fighting his own dark destiny. But will they fail to defeat her too like all the other prophesied pairs before them? If they don't succeed, he'll have to wait another generation to be free.


Leave your questions in the comments or in the form if you'd wish to remain anonymous or if you're having trouble with the comments and Harlowe will answer them on July 22nd! Thank you!