9 Non-Character-Related Obstacles to Make Your Characters' Lives Harder with Avatar: The Last Airbender 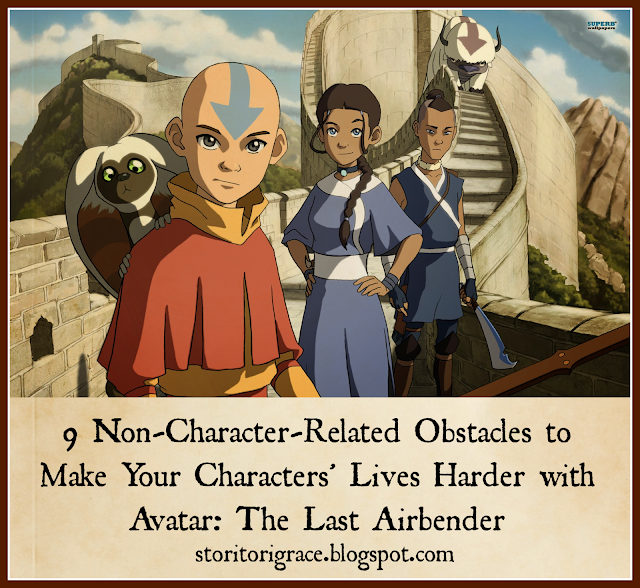 At this point in time, it's the halfway point in NaNoWriMo. If you're participating, you're hard at work typing away at your novel. Perhaps you're in a part that's giving you difficulty. The scene feels a bit flat and you need more tension or you need something to drive your character to do something and none of your other characters are helping. What better way to help with that then to make your characters' lives harder with non-character-related obstacles? These are the sort of devices that will drive your plot forward in the direction you need and your characters can't argue against you, because you're in control of these. HAHA! Avatar: The Last Airbender has all of these in the series, so I'm theming the whole post around this show.

Here are nine obstacles to make your characters' lives harder but make yours easier:

1.) Bad Weather - Out of all of these this is the most common, but it is a useful plot device. Weather can drive your characters into doing things and make battles more difficult. Rainstorms, sandstorms, blizzards, monsoons, severe heat, severe cold, mudslides, avalanches, rock slides, and more are all treacherous obstacles you can use.

How It Was Useful in the Show: The whole reason Aang was frozen in the iceberg was because he encountered a severe storm while running away from home on Appa. This drove him in the ocean where his Avatar state kicked in and froze them both for a hundred years. This is revealed to Katara when a storm drives them both to a cave for shelter. In the finale of season one, a blizzard in the snowy tundra of the northern water tribe drives Zuko to take shelter, thus slowing him down for Sokka, Katara, and Iroh to find them. 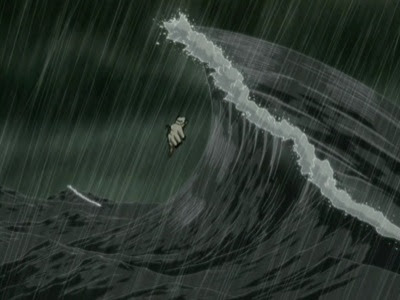 2.) Environment - There are many types of harsh environments. These environments put strain on the characters and often slow them down or prevent them from using abilities they would normally. This also forces them to think out of their comfort zones and can incite some good character bonding or character strain. Harsh environments can include mountains, tundras, oceans, areas with an active volcano, deserts, swamps, and more.

How It Was Useful in the Show: In season two, the gang are trapped in both a desert and a swamp. They are stranded in the desert for few days, which prevents them from catching up to Appa. There they almost die from thirst and lack of food or in Sokka's case cactus juice hallucinations. In the swamp, there are too many vines so Appa can't fly. The wet terrain makes traveling hard, but this eventually steers them to Yu and the swamp water benders who come in handy later in the show.

3.) Animal Attacks - There are all kinds of dangerous beasties whether fictional or real. These animals can force your characters to go somewhere they wouldn't to escape or damage your characters. Having your characters attacked by a dragon, bear, puma, snake, or numerous others can be a useful device.

How It Was Useful in the Show: In season one, the gang and a group of refugees are attacked by canyon crawlers while crossing a canyon. During the attack, their earthbending guide breaks both of his arms, which puts a huge obstacle in their way of escaping the canyon. Also in season one, while showing off Aang encounters the Unagi in the ocean and narrowly manages to escape from being killed. Later, when Zuko and his crew try to burn down the village on Kyoshi Island, Aang harnesses the Unagi to make it spray water and put out the fires.


4.) Poisonous Plants - There are all kinds of poisonous plants. Some can be misconstrued as food, others can be dangerous if even touched. These can pose as a serious obstacle. Pokeberries and hemlock berries are poisonous if consumed. Poison ivy or machineel can harm if touched. Also remember you can make up your own nasty plants like Suzanne Collins make up nightlock berries.

How It Was Useful in the Show: At one point Iroh encounters a flower that could be a delectable tea or a deadly poison. He makes the wrong decision and decides to drink it. This gives him a horrible rash and swelling, forcing Zuko to find him a healer. This has them encounter a girl named San whom they get an ostrich horse from for transport.

5.) Money - Running out of money or having money in the wrong currency can pose a serious problem. If your characters don't have money it's hard for them to get food, shelter, and supplies. This can force your characters into doing things to acquire money or to find the things they need without money.

How It Was Useful in the Show: In season two, Aang uses Water Tribe money to purchase something in a village. Apparently the money was unusable which caused him to be imprisoned, starting a series of events. In season three, the gang is running out of money in the Fire Nation, which incites Toph to gamble to get more money, which starts another series of events that involves an assassin and some bonding between Toph and Katara.

6.) Food or Water - This is kind of a given, but it is a big deal. Lack of food or water can cause your characters to be disagreeable or even be a serious health risk. Finding food or water can be an interesting obstacle and it can happen in many different ways depending on the environment. Finding food in an urban setting is very different than finding it in the wilderness.

How It Was Useful in the Show: Sokka gets himself into oodles of trouble in his pursuit of food. The reason why Aang finds Monk Gyatso is because Sokka chases Momo to where the poor airbender's skeleton lies. Aang has a break through in his earthbending because he finds Sokka stuck in a hole. Sokka got stuck in this whole because he was trying to catch the baby sabertooth mooselion Foo Foo Cuddly Poops.

7.) Sickness - A disease or sickness even a cold can debilitate your characters and cause events to happen. Your characters have to stop to get better, find medicine, or even have to just push through it. Having a character get sick in a battle can really increase the tension of the scene.

How It Was Useful in the Show: In season one, Sokka and Katara get very sick so Aang has to find medicine for them. While doing that he is captured by General Zhao. This causes him to encounter the Blue Spirit. In season two, after Zuko makes a huge decision he gets very sick, but when he heals emerges as a better man. 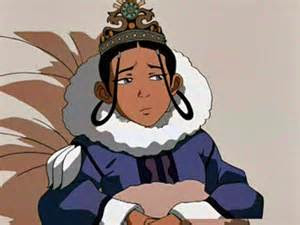 8.) Fatigue - When you get tired, really tired especially from lack of sleep you start getting forgetful, irritable, clumsy, and more. This can be a serious hindrance to your characters. I feel like a lot of writers brush past this when their character seems to be up for days and still golden. A character being exhausted can be a big obstacle. A character can fall asleep on the job or it could harm them in a fight.

How It Was Useful in the Show: In season two, the gang is kept up all night by Azula. This makes them all cranky and irritable. It also hinders Aang in his battle with her later in the episode.

9.) Traffic - These are technically characters, but this is a mass of characters. Being in a crowd can be a big obstacle. It can make pushing through areas hard or you could wham into someone, especially if you're on horseback or in a car or at a fair or convention. It can also be a help if you're trying to evade someone, because you can get lost in it, but it can be a hindrance if you're trying to follow someone, because the person you're following could get lost in them.

How It Was Useful in the Show: Throughout the show, the gang has gotten lost in crowds or lost people in crowds this has been a help and a hindrance as stated.


Conclusion - I hope these give you a few idea to help spice up your story. Happy writing!

Have you used any of these obstacles for your characters? Do you have more to add to the list? Have you seen Avatar: The Last Airbender? How is NaNoWriMo going for you?

You may also like:
Inciting Incidents 101
Reeling In Your Reader: A Guest Post by Lauren Claire
Roadmapping Your Tales
Extending Your Novel: How to Make the Story Longer Without Just Adding Fluff
Writing Lessons from TV Shows: Avatar: The Last Airbender