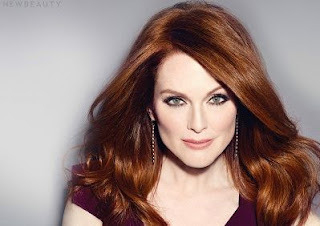 It's time for a call for questions! This is High Priestess Vanmoriel. She is my main villainess from Starbloods, and basically the most evil character I've ever created, so I'm a little nervous about interviewing her. I'm rewriting Starbloods for NaNoWriMo this year, so I want to flesh out Vanmoriel some more through a character interview! Not sure how honest she's going to be, but we shall see. Let me tell you a little bit about her!

Vanmoriel is a several thousand year old Star. She is a sorceress and a high priestess of a sacred order devoted to worshiping ancient pagan gods. Once she had blonde hair and blue eyes as characteristic of a star, but her corrupted abilities colored her hair red and her eyes green. Long ago she betrayed her race in devotion to her gods and has been loyal to them ever since.

Because she is so ancient, she has become numb to most emotion. She rarely experiences joy, anger, sadness, or happiness. She gets sadistic pleasure from others secretly and primarily so she can feel some sort of emotion at all. She uses her feminine wiles to get anything she wants and if that doesn't work she kills until she does.

By sacrificing other races and stealing their abilities, she has gained power beyond a normal star's such as casting hexes from fairies and manipulating sigils from giants. She can crush the heart of anyone standing within ten feet with her with just a motion of her hand.  She rules the country of Ibreain, a realm of stars with corrupted abilities like hers, a realm she believes is free from the constraints of the old ways. She believes this way of life should be spread throughout the continent of Grathain and seeks to corrupt her sister country of pure stars to become just like hers.


Leave your questions in the comments or in the form if you'd wish to remain anonymous or if you're having trouble with the comments. Vanmoriel will answer them on November 25th! Thank you!
Posted by Victoria Grace Howell at 1:00:00 PM