Writing Lessons from Movies: The Incredibles 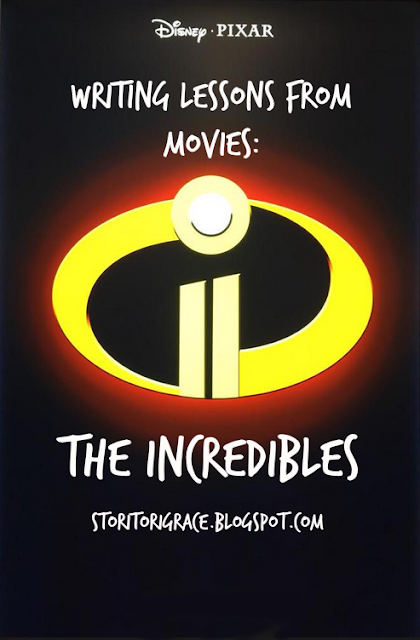 The Incredibles is one of my favorite Pixar movies if not my favorite Pixar movie. I love the concept of a superhero story set in the 1960s. I love the superhero family. And the dialogue is just gold. The characters are fleshed-out and so likable. Pixar is known for their amazing story writing, so I believe it's about time that I've highlighted some writing lessons from one of their movies. As Mr. Incredible would say, "Show time."

1.) The Story Centers Around One Important Event - The opening scene of this film is referenced to throughout the movie. This is when Mr. Incredible causes his lawsuit, which contributes to the disbanding of superheroes and when Buddy decides to turn into Syndrome. This single event caused most of Mr. Incredible's problem and is very key to the story.

How this can be applied to writing: Have you thought of writing a story that centralizes around one event early on in the story? Brandon Sanderson also did this in Steelheart. It can be a very interesting story technique and have you wondering about what repercussions that one scene is going to have.

2.) Writing a Genre in a Different Time Period from the Norm - Part of the uniqueness of the Incredibles is that instead of it being set in present day, it's set int he 1960s. This allows the fun worldbuilding of retro technology and more classic costumes. The lack of modern conveniences such as cellphones can also pose as an interesting element.

How this can be applied to writing: Have you thought of taking a genre known for taking place in a certain time period and changing it? Like setting a fantasy novel in the future or a romance story in Roman times?

3.) Calling Out Cliches - One of my favorite parts of this movie is how it calls out so many superhero cliches like the danger of wearing capes, villain monologues, and bad guys not hurting children because they're children. Edna particularly is known for insistence upon not letting Mr. Incredible have a cape. Frozone and Mr. Incredible laugh about how a villain started monologuing when Frozone was captured. Helen has a sound talk with Dash and Violet about how bad guys won't show restraint on children. This adds bother humor and a sense of realism to the story.

How this can be applied to writing: Can you call out cliches in your story's genre? Every genre has them and pointing them out can be quite an amusement for your reader.

4.) Showing People Out of Shape - When people don't work out for a while, they get out of shape, even superheroes. I've often seen movies where years later a hero still has their full capacity even though they haven't practiced in years. That just isn't realistic. Everyone has to warm up even when they are great at what they do. Seeing Bob gain weight after years of superhero dormancy and then have to work it out was an interesting sight to see.

How this can be applied to writing: Do you have heroes that haven't worked at their craft in a while? Mentioning that they're out of shape is a good thing to include to add more realism to your story.

5.) A Married Couple Whose Relationship is Actually Working - It's very popular nowadays for couples to have tumultuous marriages or even be divorced. It's a breath of fresh air to see couples like Bob and Helen, who have a healthy marriage. Yes, they have their struggles and their doubts, but they work through them like couples should. By the end of the movie their marriage grows like a marriage should. It's nice to have good role models like them out there in media.


"How could I betray the perfect woman?" - Mr. Incredible

How this can be applied to writing: Have you thought of including a healthy marriage in your story? We need more of those in media today.

Conclusion - The Incredibles is a great movie, not just as entertainment but for gleaning good points about writing.