A Book Review of Crown of Midnight by Sarah J. Maas

Celaena Sardothien is the king's Champion-yet she is far from loyal to the crown, for the man she serves is bent on evil. But working against her master in secret is no easy task. As Celaena tries to untangle the mysteries buried within the glass castle, she can trust no one, not even her supposed allies Crown Prince Dorian, Captain of the Guard Chaol, and foreign princess Nehemia.

Then, an unspeakable tragedy shatters Celaena's world. She must decide once and for all where her loyalties lie . . . and whom she will fight for.

An action-packed and romantic adventure that readers “will never want to leave” (Kirkus Reviews), the next chapter in this smash hit New York Times best-selling series is sure to please Sarah Maas's enormous and ever-growing fan-base–and to set the stage for an explosive third book.

After reading Throne of Glass (Review here!), I knew I had to read the rest of the series. I didn't intend to read the novel so soon, but when I went to the library and didn't find the novel I was looking for, I decided to snatch this one up. I'm so glad I did!

The Plot: Like Throne of the Glass, this novel also has an ere of mystery as Celaena tries to solve ancient riddles. We're also wrapped up in the tension of the King's orders he's imposing on Celaena, plus her tumultuous love life. It's all very engaging. Plus more threads with Chaol and Dorian. I love that more magic is involved. That makes me happy.

The Characters: Old characters such as Celaena, Chaol, Dorian, and Nehemia return along with new characters like Archer and an a witch of the Iron Hills. Celaena grows much in this book. I love how she's slowly evolving from an antihero into a hero. It makes me happy. I also love her bonds with Fleetfoot and Nehemia, especially in the breakfast scenes. Mort the Bronze Door Knocker makes me laugh. But seriously one characters' death. I'm keeping this spoiler free, but noooooooooooooooooo I loved that character!

The Setting: I adore the world Maas has created. I love the addition of more out of world creatures, fae, and the origin of her witches. It's all so cool!

Epic Things: Ancient riddles and magic. I'm a sucker for those two things.

The Theme: I loved Nehemia's impact on Nehemia. She really inspired her to embrace who she was born to be, how she inspired her to be good. Their friendship is a beautiful thing. 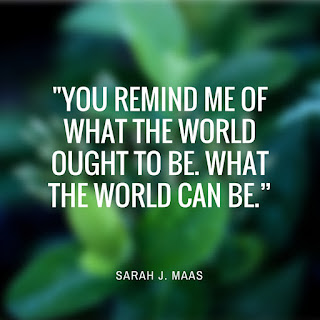 Content Cautions: Because this book deals with courtesans, there's a bit more content than Throne of Glass. There's mention of courtesans and what they do, including one with a homosexual client. Two characters are implied to have sex multiple times, and there's a good bit of kissing. There is some drug content because one character has an opium addiction. There is some violence, most notably a severed hand, two severed heads, and organs mentioned to be spilled on the floor. There's also quite a bit of swearing including, twenty usages of d***, twenty-one usages of h***, eight usages of a**, six usages of ba****d, four usages of b****, and two usages of sh**.


1.) Making Your Reader Like a Character Quickly - I was very unsure about Archer at first, but within five pages of his appearance Maas made me like him. She did so with a paragraph bit of backstory. That was all it took for me. It shows that a little can go a long way.

How this can be applied to writing: First impressions are huge on your reader. If you want them to like a character, you'll have to do it fast or you'll have to work even harder for your reader to like them. A little bit of backstory can be just the thing to sway their opinion.

Sarah J. Maas is the New York Times and USA Today bestselling author of the Throne of Glass series (Queen of Shadows, Book 4, will be out in September 2015), as well as the A Court of Thorns and Roses series (out 5/5/15).

Sarah lives in Bucks County, PA, and over the years, she has developed an unhealthy appreciation for Disney movies and bad pop music. She adores fairy tales and ballet, drinks too much tea, and watches an ungodly amount of TV. When she's not busy writing, she can be found exploring the historic and beautiful Pennsylvania countryside with her husband and canine companion.