What Being an Editor for a Website has Taught Me 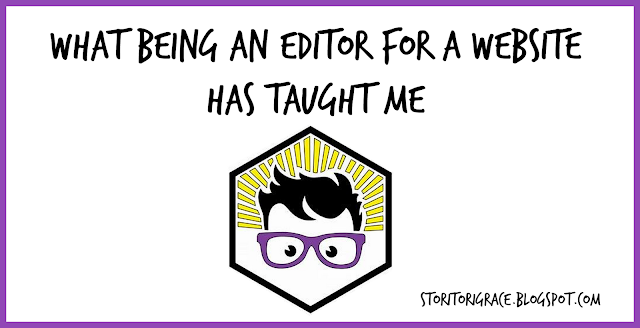 September was my two year anniversary being with Geeks Under Grace. Two years ago, I had just left a really difficult job and I noticed this really cool organization my friend was a part of. Geeks Under Grace is a site where Christian meets geek. We review movies, games, and more with a Christian perspective. We also have a newscast and devotionals for the geek crowd. I love the vision. So I asked to join and the owner said yes.

At first I was going to be a writer, but then my internet was out for two or three weeks (Thank you, Comcast) and I almost lost that position. When near the end of that long and extremely aggravating time my friend and colleague Casey, Editor-In-Chief of GUG, asked me to be an editor because she needed one desperately. Now I'm the head movie editor and I have six writers under my wing.

Throughout my experience, I've learned a lot of things that I feel have affected both my skills as a writer and my life. Here are five of the most important:

1.) Improving my Editing Skill - This is an obvious one, but practice makes perfect, eh? Because I've edited so many articles in my time, I've gotten a sharper eye. I've also discovered new ways on how to make sentences better and new ways on how to make my editing more effective. I feel like my blog has improved much since I've started editing, because I've had to edit not just grammar, but formatting as well.

2.) Learning How to Manage People - I've never really pegged myself as the leader type. I'm a really shy and introverted person, but I've liked being in charge of a group of guys. It's increased my people skills and leadership skills. I've dealt with both really good people and really irritating people (as in people who were so picky that got mad at me because I deleted a colon in their review).

3.) Learning How to Coordinate with People - Being part of the management team I suppose, I've had to learn to coordinate with them like to keep in communication during event weeks and to ask for the headliner. I've attended meetings and learned business skills from that.

4.) Raising my Standards - At the beginning of being an editor, I didn't have a lot of experience (but you don't get experience until you've first experienced the thing you need to get experience). Now I've learned more about what looks good in an article, about guidelines, what are articles get more views and why, and about quality of the content of the article.

5.) Empathizing with Editors and Agents - I'm really beginning to understand you guys. It's super irritating when a writer doesn't adhere to guidelines. I get forgetting a tag or two, but when a review comes up 200 words short or forgets an entire section, I have to tell the writer to go back and fix it. An editor's job is to polish the article, not to completely revamp it. I totally understand when an editor or agent reject a piece just because it doesn't hold up to guidelines. We give the writers a guide. It's not too hard to adhere to it.

Conclusion - Being an editor for a website has definitely changed me. I believe it's been an essential part of my growth as a writer. Because of this position it's also helped me get further positions with other companies like as a staff writer with Geekdom House (which is another post that I will be speaking about in the coming weeks). If you have the opportunity to be an editor for a website or the like, I highly recommend you do it. It will increase the quality of your other written works exponentially.

You may also like:
Extending Your Novel: How to Make the Story Longer Without Just Adding Fluff
How Sentence & Paragraph Structure Can Boost Your Book
Six Tips For Line Editing
Writing vs. Editing: The Different Mindsets
Twelve Rookie Writer Mistakes and How to Mend Them