A Book Review of Scarlet by Marissa Meyer


Cinder is back and trying to break out of prison―even though she'll be the Commonwealth's most wanted fugitive if she does―in this second installment from Marissa Meyer.

Halfway around the world, Scarlet Benoit's grandmother is missing. It turns out there are many things Scarlet doesn't know about her grandmother, or the grave danger she has lived in her whole life. When Scarlet encounters Wolf, a street fighter who may have information as to her grandmother's whereabouts, she is loath to trust this stranger, but is inexplicably drawn to him, and he to her. As Scarlet and Wolf unravel one mystery, they encounter another when they meet Cinder. Now, all of them must stay one step ahead of the vicious Lunar Queen Levana.
Series: The Lunar Chronicles (Book 2)
Genre: YA Science Fiction
Publisher: Square Fish; Reprint edition (February 4, 2014)
Page Count: 512 pages

After really enjoying Cinder, I knew I had to get the sequel! For Christmas I got a hold of it and now I've finally been able to see the sci-fi retelling of Little Red Riding Hood's tale!


The Plot: Unlike the first book, this book is told in two point of views: Cinder's and Scarlet's, Cinderella's and Red's. Both are very exciting and kept my interest as both tried to solve the mysteries hanging around their lives, Cinder trying to find her identity and Scarlet trying to find her mother. There were some great twists and I love how seamlessly their point of views wove together into the plot. The climax had me gripped to the end.

The Characters: Cinder and Scarlet are great point of view characters. I loved having Cinder as the distrusting cyborg and techy and Scarlet as the hotheaded farm girl. Their point of views were very different as in Cinder's she thought more about technology and had her cyborg circuitry while in Scarlet she often made a point to describe food and often let her anger get the best of her. Kai also gets some point of view time. I really empathize with his need to do what is right, but the conflict in how that affects him personally.

Thorne took a little while for him to grow on me, but eventually I really enjoyed his character as well. He made me snicker many times. Wolf was a very dynamic character. I couldn't figure out what he was and at the end when it was finally revealed I exclaimed "Ohhhhhh that's smart!" I love his version of the Big Bad Wolf and his tomato obsession was really adorable. I of course love Iko. I'm so happy she comes back!

Levana as always is a formidable and scary. I liked getting a final scene in her point of view. Normally I don't like villain point of views because I believe they break up tension, but this time it worked perfectly.

The Setting: I love the setting because most of it is in France, which is one of my favorite countries. It's the only country I've been to in your Europe as of now (I want that to change), so I am a bit biased. I love seeing the French countryside and the ruins of Paris, though the Parisian ruins made me feel a bit sad, especially the Opera House since I've been to that Opera House and it's absolutely beautiful.

Epic Things: There were so many epic things from a fun spin on werewolves to Iko being the brain of Thorne's ship to so much France. ^ ^

The Theme: Truth is a big one. A lot of characters are seeking truth in this story.

1.) Villain Scene Done Well - At the very end of the story, we get a glimpse of Queen Levana's point of view and a tidbit of her future plans and some fleshing out of what we already know. It's enough to pique my interest for the next book without spoiling anything.

How this can be applied to writing: Many times I have a problem when the book goes into the villain's point of view. I like being surprised about the villain's plans and I don't like it when they're spoiled and I'm waiting for half the book for the main character to catch onto what I already know. In this villain point of view, we get more what we already know and some popcorn kernels of information without giving us the whole picture.

Conclusion: Overall, loved this book. I'm looking forward to reading the next one! 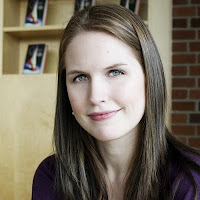 Other Reviews of Books by This Author:
The Lunar Chronicles Book 1: Cinder