Utopian versus Dystopian: A Look at Two Societies 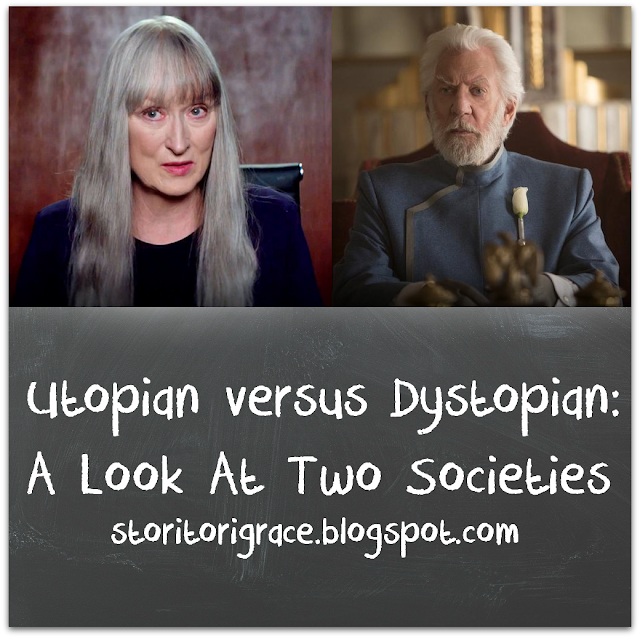 Dystopian is a very common word in the YA literature community, while on the other hand Utopian is more akin to classrooms. Despite original intentions both of these societies can be very nefarious and controlling but it in polar opposite ways. I was discussing this with Cassia @ The Book Bowl and she put the differences this way:

I don't know about you, but this concept blows my mind and it really summarizes a lot of societies. Let's break this down further.

Dystopians - This type of society uses fear tactics to force people into submission such as taking away resources such as food or medicine, arresting, executions, curfews, banishment, torture, and even enslavement.

Example: The Hunger Games - Panem is a prime example of a truly dystopian environment. For generations, the Capitol has used The Hunger Games to instill fear into the Districts and even make the districts hate each other. When the districts don't obey, they use many of the tactics listed above. In Catching Fire, a new peacekeeper comes in and takes over District 12. He enforce torture, arrests, and curfew. In District 11, because of the outbreak any symbol of the mockingjay is met with sound retribution. Members of the Capitol can be made into Avoxes, slaves with their tongues cut out, like Pollux. In this dystopian society no one is safe.

"A reminder to the rebels that even the strongest among them cannot overcome the power of the Capitol." ~ President Snow 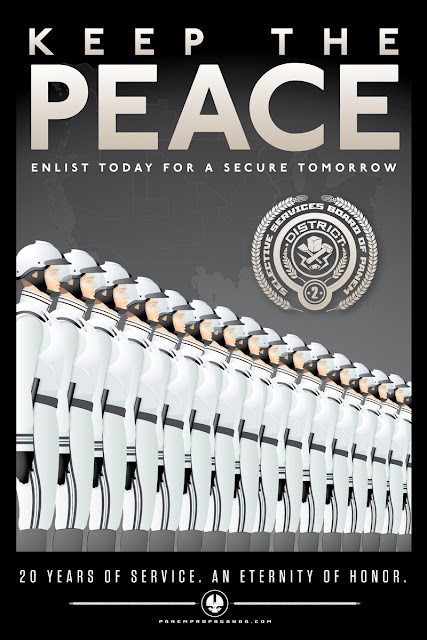 Utopians - This kind of society fosters trust. They want the people to believe that they can make all of their problems go away. They never talk about death and usually call it something else. This can sound pristine, but it can get really creepy really fast.

Example: The Giver - In the Community, everyone's lives are planned out for them, everyone has a purpose, and there is widespread peace. There's no need for locks or secrets or weapons, because everyone is sedate. However, to maintain this tranquility, the Community prescribes drugs to suppress thoughts such as sexual urges or even the ability to see color with the excuse that this keeps order and equality. Death is called being "released." The elderly are released after a certain age and even babies and children that are considered unfit for society. Instead of the outright oppression of a dystopian society, this type uses an insidious method to keep people under control.

Beginnings... From disorder and chaos, from great suffering, great pain. From confusion and envy and hatred came a solution: Communities. Serene, beautiful place where disorder became harmony.  ~ The Chief Elder 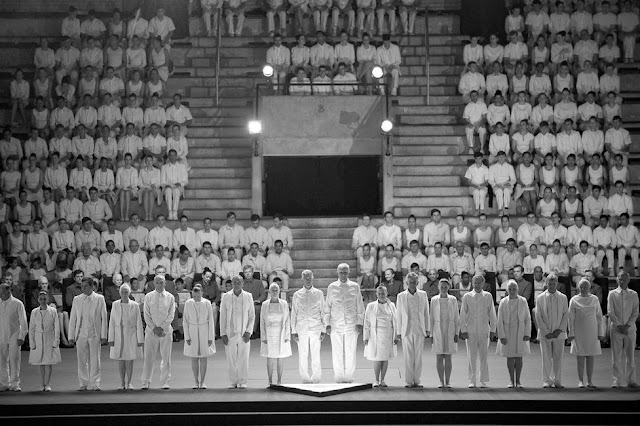 Hybrids - There are also hybrids between these societies. Ones that use tactics of both.

Example: Psycho-Pass - In this society, psychological health is the utmost priority. This can be checked with machines to discover the individual's hue. If the hue is a bluish color, that means the person's psychological health is good, but if it's in the red then the person is either arrested and taken to a mental facility or eliminated. Weapons called the Dominators choose for the policeman. Because of this the government implements a lot of ways to try to maintain everyone's hue such as making policeman look like friendly cartoon characters around a crime scene and even controlling music and movies, because of how art can influence people.

The Law doesn’t protect people. People protect the law. People have always detested evil and sought out a righteous way of living. Their feelings… The accumulation of those people’s feelings are the law. They’re neither the provisions nor the system. They are the fragile and irreplaceable feelings that everyone carries in their hearts Compared to the power of anger and hatred, they are something that can quite easily break down. People have prayed for a better world throughout time. In order for those prayers to continue to hold meaning, we have to try our best to protect it to the very end. We just can’t give up on it.Tsunemori Akane (Psycho-Pass) 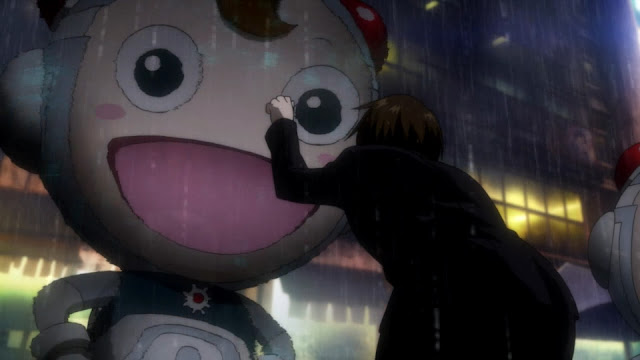 Example: Patema Inverted - Aiga is a society of people who were unaffected by the gravity experiment that ended up making a large perfect of this world's population float up into the sky and die. Izamura, the society's leader, foster the fear of the sky. He promotes that it's sinful to look up at the sky, because the sinful will "fall into the sky." He hunts the Inverts, which are people influenced by the other polarity of gravity, saying they will harm the rest of society. One of the main characters named Age (pronounced Ah-gay), is even given demerits for looking out the window at school. 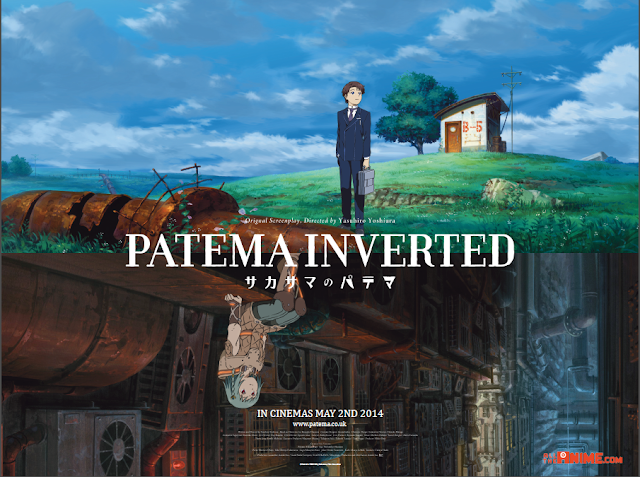 Conclusion - Using one of these societies can give your book an extra amount of depth. This breakdown is meant to help you write these societies greater detail--and creepiness. ;)

You may also like:
Why We Should Still Write Good vs. Evil
Keeping Morality in Fiction: Are you sacrificing your role models for character conflict?
Keeping Morality in Fiction: Perfect and Good Characters Aren't Synonymous
Tone Down But Don't Water Down
Why a Writer Should Travel: Quell Your Fears and Embrace Inspiration
Posted by Victoria Grace Howell at 1:00:00 PM