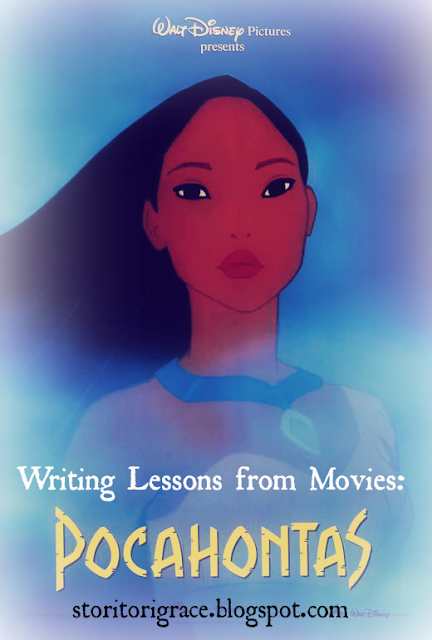 Pocahontas is one of my favorite Disney films. It's the first Disney film I remember watching and the lyrics give me chills every time. It's also based from a true story which makes the tale even more interesting. It is also hailed by the Native American actors as one of the most accurate films portraying Native Americans at the time. I've always felt a connection to the Native American culture which is why this film is even more close to my heart.

Besides all that, Pocahontas has some fantastic things to teach us about writing. So let's get through this steady as the beating drum. ;)

1.) Adding a Speculative Element to a True Story - Pocahontas is closely based on the true story of the Native American girl. Though there are elemental changes such as her age and the romance between her and John Smith, the writers also added a classic speculative element as characteristic to most Disney films with Grandmother Willow and the Spirits. This gave the film a feeling of ancient and wild wonder and, in my opinion, enhanced the film instead of hindering it.

How this applies to writing: Have you thought of retelling a true story and adding a speculative element to it? Would the speculative element just add another dimension or will it be crucial to the plot? Adding a sprinkle of magic to an old story can bring a new twist on it!

2.) Characters Who Want the Same Things for Different Reasons - Ratcliffe and John Smith traveled to the new world for different reasons. Ratcliffe seeks gold and riches to enhance his station back home in England while John Smith simply loves exploring new lands and finding adventure. Because of these ideals their goals severely clash later in the film and cause much tension between them and those they're friends with. Their conflict doesn't only affect them but this around them.

3.) Scene Transitions - During my recent rewatch, I noticed this film has some pretty fantastic scene transitions. These can be crucial to keeping the movie flowing without choppy scene breaks. Some of my favorites were when the men were preparing to leave England and the camera focused on the Union Jack then the scene cut to the Union Jack in tatters during a storm. More dialogue-based descriptions were when John Smith was talking to his men and saying how he's seen so many new worlds how can this one be different then the scene transitions to the Native Americans and their opening song. Lastly, when Pohatan was speaking to the shaman he mentions his daughter Pocahontas then after a brief conversation the scene transitions to Pocahontas looking out over the cliffside. 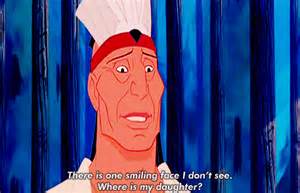 How this applies to writing: Using one similar idea to transition to a different scene can make your scenes link seamlessly. Mentioning a character and ending and beginning with similar elements are just two ways to do this.

4.) Characters Who Speak Different Languages - This film deals with two different languages. While Pocahontas and her people speak Algonquin, John Smith, Ratcliffe, and the crew speak English. This causes initial language barrier issues especially between John Smith and Pocahontas, before the Spirits grant her the ability to hear and speak English, though they also teach each other words such as "Wingapo" and "compass".

5.) A Bittersweet Ending - Unlike most Disney movies, Pocahontas's ending isn't a typical happily ever after. Though peace is made between white man and red man, Pocahontas and John Smith can't be together because of his injuries. Thus Pocahontas's goal is accomplished but not all of her desires are fulfilled. The ending scene where she wishes him goodbye as he's sailing away always pulls at my heart strings.

How this applies to writing: I always thinking of bittersweet endings as the protagonist accomplished his or her goal but something happened to prevent complete happiness. This could be a death or separation or an injury or something of the like. These can be immensely powerful. Another example of a bittersweet ending is from Cognition: An Erica Reed Thriller. Erica finds the Cain Killer and finally avenges her brother Scott, but because she accidentally killed John she can no longer be part of the FBI and she must find a new purpose in life.

Conclusion - Pocahontas is a powerful film in many ways. It's one of the many films I believe myself and others can learn how to better their writing craft!