A Book Review of Defy the Stars by Claudia Gray


She's a soldier -- Noemi Vidal is willing to risk anything to protect her planet, Genesis, including her own life. To their enemies on Earth, she's a rebel.

He's a machine -- Abandoned in space for years, utterly alone, Abel's advanced programming has begun to evolve. He wants only to protect his creator, and to be free. To the people of Genesis, he's an abomination.

Noemi and Abel are enemies in an interstellar war, forced by chance to work together as they embark on a daring journey through the stars. Their efforts would end the fighting for good, but they're not without sacrifice. The stakes are even higher than either of them first realized, and the more time they spend together, the more they're forced to question everything they'd been taught was true.

A few months ago I took the test for which planet from this book's storyworld I was from and I believe I got Genesis. Then my friends and I decided to read this book together thus I got it and started reading it and I really enjoyed it.

The Plot: The story held me through to the end. I didn't feel like it lagged in any part, and I loved all of the traveling to different planets. I really like how the story flowed so the readers could visit each one.

The Characters: I really enjoyed the protagonists Noemi and Abel. By the end of the book I felt like I knew them as close as I would a friend. That really counts as good character development to me. Their details stuck with me.

Both of them feel like they're alone in the world. Noemi feels alone because of her lost parents and her adopted parents never seeing her as their own, so she closed herself off. Abel is the only one of his kind therefore he feels alone. I really liked how they could relate to each other in that way. I also enjoyed Abel's simple love for the film Casablanca and how Noemi is devoted to her planet's beliefs.

The Setting: This is a space opera so there's a lot of travel from planet to planet. Each places is very distinct. Kismet is very tropical and crowded, Stronghold very harsh and stiff, Genesis peaceful and serene, Earth decaying and consumed with modern conveniences, and Cray secretive and elite. I enjoyed going to every planet and I felt like I was exploring them along with Noemi and Abel.

Epic Things: There a lot of epic things in this book. I loved having the POV of a mech. I love machine point of views. I think they're so interesting. A character was buried in a star, which I thought was so beautiful.

The Theme: I really like how this book tackled loneliness. Abel is lonely because he was truly alone in a ship for thirty years, but Noemi was alone despite being surrounded by people and I really empathize for that.

Content Cautions: This is a pretty clean book. There is mention of prostitution, brief nudity during a medical examination, and the worse gore was when a character digs out a memory chip out of their brain and there's mention of bone chips and well gore. There are ten usages of d***, ten usages of h***, two usages of a**, one of b**ch, and one of sh**.

1.) Portraying Religion Respectfully - On Genesis, just about everyone is a member of a faith whether that be Christianity, Catholicism, Islam, Buddhism, etc. Noemi is Catholic and she often prays, but she also struggles with having faith. I love her journey though with connecting with her faith throughout the story. It was very unusual to see in a secular book.

How this can be applied to writing: This book really gave me more hope for humanity when it comes to religion portrayal, because I'm sick and tired of anyone religious turning out to be a crazy zealot. In most of what I watch or read that's what happened. I only know a handful that don't and most of them are because they're Christian literature. I may not agree with all of the theology stated in this book, but at least it was done respectfully.

2.) Featuring Unusual Injuries - A character actually breaks her pelvis and I thought this was an unusual and rarely shown wound. The injury ends up having fatal implications, but I found it interesting that the author chose to use this sort of wound as opposed to a more typical broken ribs or cracked skull.

How this can be applied to writing: Try doing your research and having your character sustain more unusual injuries. The body can break in so many ways. ;)

Conclusion:  I actually really enjoyed this book. It held my interest and I found myself reading more than what I planned. Five stars! 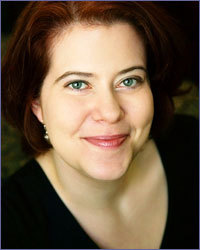 Claudia Gray is not my real name. I didn't choose a pseudonym because my real name is unpleasant (it isn't), because I'd always dreamed of calling myself this (I haven't) or even because I'm hiding from the remnants of that international diamond-smuggling cartel I smashed in 2003 (Interpol has taken care of them). In short, I took a pseudonym for no real reason whatsoever. Sometimes this is actually the best reason to do things.

I live in New Orleans. So far, in life, I've been a disc jockey, a lawyer, a journalist and an extremely bad waitress, just to name a few. I especially like to spend time traveling, hiking, reading and listening to music. More than anything else, I enjoy writing.
Blog//Twitter//Facebook//Goodreads//Instagram