So Your Character Has a Broken Bone ... Featuring Hannah England, Morgan Richert, and Christian Johnson 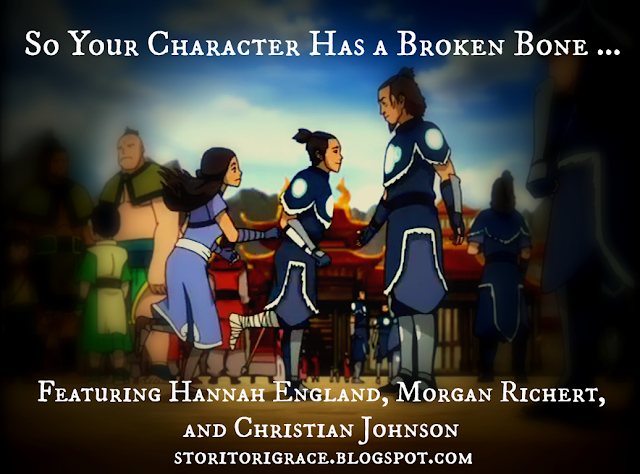 In this special edition of So Your Character Is ... I've asked various people tell their stories about when they broke a bone. I've never broken a bone myself and many a time we want our character to break a bone, but we have some questions that firsthand experience answers best. There aren't any graphic images, but I have included x-rays for reference.

I fractured my right tibia when I was a preteen. I was hurrying down the hallway and slipped on a smooth patch of the wood floor with my left foot. My left foot flew forward while my right foot stayed under me, and I ended up smashing my leg between my body and the floor as I fell. The pain hit me immediately, and though I could think, I couldn't talk without yelling. I was babysitting my little sister at the time, and I didn't want to freak her out, so I just clenched my jaw and waited for the pain to pass.

A few minutes later I was able to let her know she should call our mother and a few minutes after that I was able to crawl to the couch. The pain subsided to a dull, thudding pain, but whenever someone touched it, it was sharp again. I went about five days with my parents thinking I had just sprained it, but since I still couldn't walk after that long we went to the doctor for an x-ray and got a cast.

I had the cast on for... I think 6 weeks? Then I was on crutches without a cast for about two weeks before I could limp on it again. It didn't hurt anymore, but my ankle was weak for a while. Even after it healed, sometimes my right leg would twinge when the thought of falling came into my head, like my body remembered the pain and was warning me to be extra careful.

A couple years back I managed to get in an ATV crash and broke my arm and fractured my neck. When it happened I never really felt pain, it was mostly just like, "Oh okay I'm here now." It only hurt if I tried to move my neck. It's true that you tend to know when something broken immediately, my arm wasn't moving when should, so it was easy it figure out. The psychological pain was a lot worse in that instance. For me I was significantly more worried knowing that I could hear my cousins who were also in the wreck, but I couldn't turn or look for them or respond to them due to throat damage.

Throughout my recovery I was really only occasionally in mild pain from being sore, more than anything. The only sharp pains I felt was when I fell asleep with my arm stretched out, which hurt a lot when I had to bend it when I woke up. I had a broken neck and arm at the same time, so I never had casts that would put weight on my shoulders or neck. There were a lot of Velcro straps.

I have more scars from the hospital than the actual wreck, from tap lines and clean, straight-line surgery scars. Neck injuries tend to result in a lot of testing, I've found, but not for broken bones, rather for when there's soft tissue damage. I punctured a salivary gland and had to do all sort of testing to figure out what was going on.

I had surgery for my arm, I have a plate and I believe three screws in there, but I never had surgery on my neck. I would have needed to have the punctured gland removed, but it ended up closing up on its own. 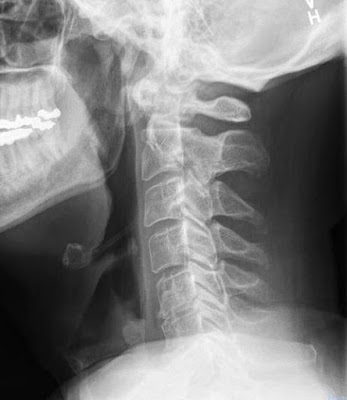 Last year, I fractured both my left elbow (radial head) and right hand (scaphoid) in the same fall. I broke them while I was longboarding across campus. I was going very fast, and I must've hit something, because I went flying off the front, and my hands hit the ground first. I rolled so I wouldn't hit my head, but my arms took the brunt of the impact. I ended up on my back and slid on my backpack a few feet.

It honestly didn't hurt at first much at all. I felt shaken up and achy, and I had skinned my knee and shoulder pretty bad, which stung quite a lot. I just sat down and sized up the situation, what hurt, what I could move, etc. I could actually move everything fine, it just hurt some, so I thought I was fine, and I decided to walk back to my dorm and carry my board.

About halfway back, I had been carrying the board with my left arm, and my elbow started to hurt much more, and I couldn't quite straighten it the whole way. My right wrist had swollen up by now, and hurt, but I could still sort of move it. At first I thought my elbow was dislocated, because it still didn't hurt almost at all if I didn't move it. But, I went to the hospital, and they told me I broke both of them.

Supposedly on my elbow, the fracture had caused fluid to flow into the joint, which made me unable to bend it past 90 degrees. They tried to get me to bend it straight for an x ray, and when I tried, it hurt like nothing else I had ever experienced. It was literally the worst pain I've ever felt. I got put in massive splints for a weekend before getting a soft splint on my elbow, and a forearm cast that encapsulated my thumb on my right arm.

My elbow took about 3-4 weeks until I could take the soft splint off, and the doctor wanted me to start moving it around so I would get my motion back. It was a small fracture, so it had healed pretty quickly, and it took about a week or two more to feel pretty much normal again.

My wrist had to stay in the cast for about six weeks, and not using my thumb was a pain, but I adjusted pretty quickly. Once it got taken off, I didn't really need to wear a removable cast, even though I was given one. Getting the motion back was more important.

My hand took longer to go back to normal, I still felt soreness sometimes in my wrist and thumb if I did something physically strenuous on that area for a good month or so after it was off. Apparently that particular bone I broke usually takes even longer to heal, but the way I broke it compacted the fracture, essentially pressing the two pieces together, which made it heal faster.


Thank you again, Hannah, Morgan, and Christian! This is such a wealth of information! Now these are just three stories. If you, reader, have a broken bone story, please tell me in the comments then I'll update the post with your story!  Thanks for reading!