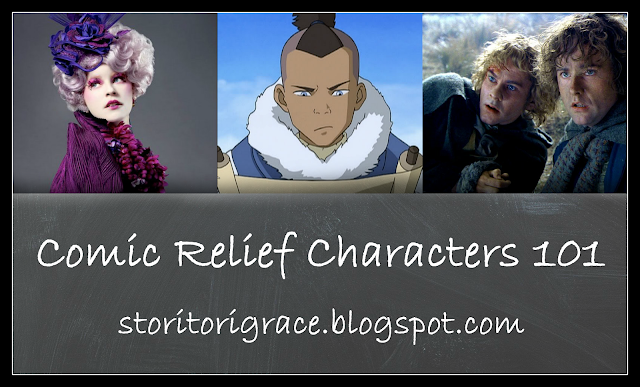 Comic relief characters are a literary tool meant to relieve tension when the audience can get too wound up in the conflict and need a laugh. They're most common in suspense stories, because sometimes if a story takes itself too seriously it can come across as bland and boring. On the flipside, unless your story is a blatant satire or comedy, too many jokes can cheapen the story. Thus a good balance of comedy must be struck and often you need a good comic relief character to take on that mantel.

1.) Funny Doesn't Have to Equal Stupid - This is an especially notorious feature in any sort of media where kids are remotely involved. It seems that most filmmakers for this sort of demographic believe all kids love idiotic characters who thrive on potty humor. Newsflash: even as a small child I never liked potty humor. Maybe I'm the exception, but I never laughed at it when I was kid. I just found it uncomfortable.

Example: Hei-Hei (Moana) - Before the pitch-forks come out, I like Hei-Hei. He is very funny, and the stupidest chicken I've ever seen anywhere. When Maui puts the grains in front of him and he pecks totally not even close to the food, I about died laughing, but ... that's the thing Hei-Hei only made me laugh. I never felt any other emotion for him. Hei-Hei was there to make you laugh at his stupid antics and that's it. Purpose served, but nothing else. 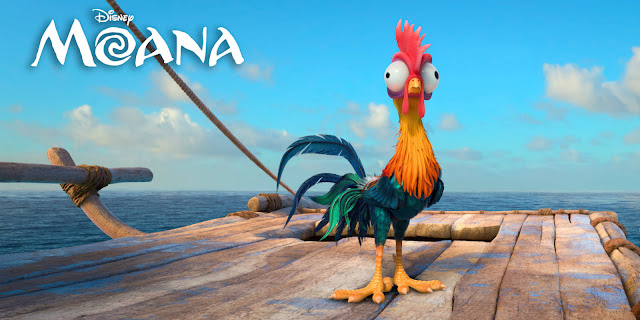 Example: Sokka (Avatar: The Last Airbender) -  Sokka really broke the mold for his age demographic. Most of the comic relief characters on Nickelodeon were just as I described in the intro for this section: dumb and crude. However, Sokka is very funny but also very intelligent. Throughout the show, he comes up with many inventions, battle strategies, and more, while still making you double over from his sarcastic, meat-loving, non-bender personality. 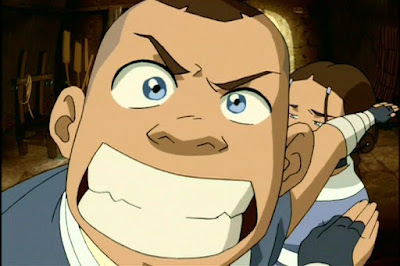 2.) There's a Fine Line Between Funny and Annoying - Jokes can get old. Jokes can be ill-timed. Jokes can just be well ... not funny. When this happens, viewers/readers can get fast annoyed with your comic relief character.

Example: Sven (Frozen) - Okay here come the genuine pitchforks. I'm not a fan of Frozen for many reasons. One of them is the comic relief/side characters, starting with Sven. For the most part he was fine, but as soon as Kristoff made him talk I was like, "No no no. Please, God, stop."

He got on my nerves really fast. I was literally cringing. Some could argue this was Kristoff's fault. Well he did it whenever Sven was around ... so ... 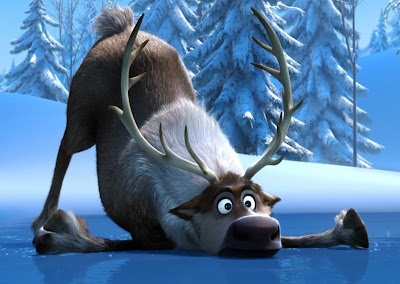 Example: Riley Poole (National Treasure)  - Anyone who has seen National Treasure knows that Riley made this film. I thought all of his jokes were perfectly-timed. He could have easily became annoying, but he had a perfect mix of skepticism, sarcasm, and wit that just made him lovable throughout the whole movie. I never found him annoying once. He didn't bog down the other characters. In fact, he was very important for the plot. More on that later on.

3.) They Need to Help More Than Mess Up - When a comic relief character seems to be doing more harm than help to the protagonist this can also cause them to be annoying. It makes the readers wish they would just put the poor sod out of his misery, so he doesn't kill them all or even why is this character even here in the first place?

Example: Jar-Jar Binks (Star Wars: The Phantom Menace) - Jar-Jar notorious known as the most hated character of Star Wars, maybe even of fandoms of all time. I've never seen so much hatred toward one character before, but there are countless negative memes about him--and for good reason. Yes, he had some contribution to the plot, but it paled to his hindrances to the plot. I'm assuming the writers wanted his bumbling slapstick antics to be funny, but they came across as anything but. During many instances, he caused more harm than good or just peeved all of the actual characters in the movie. Even Qui-Gon Jinn finally has it with him and tells him off. 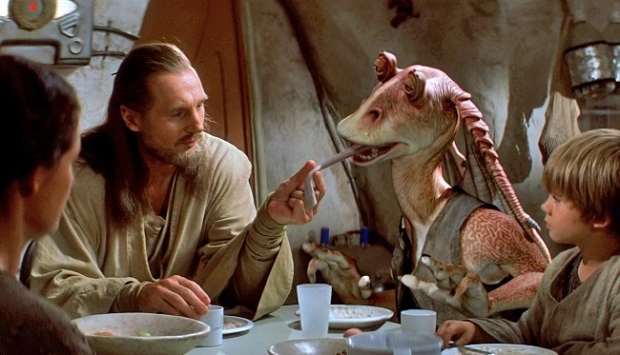 Example: Effie Trinket (The Hunger Games series) - Effie at first seems really shallow and only wants to do her job and help the Capitol, but as time goes by she becomes more and more essential to the plot as she encourages and even helps Katniss and Peeta. In the Mockingjay Part 1 and 2, she's a big moral support to Katniss. She pulls her weight as a character without messing things up.

4.) Comic Relief Characters Don't Have to Be Happy All of the Time - Comic relief characters are human too, which means they can feel more than just happiness. They have the capability to be sad, serious, embarrassed, angry, etc.

Example: Olaf (Frozen) - This little animated snowman is constantly happy. Nothing phases him. Personally, this constant happiness got on my nerves. The only time when he gets remotely serious is when Anna is dying and he tells her that she's worth melting for. Personally, I would have thought this would have had more impact if he had actually melted then he was brought back to life later, but you know that's just me ... 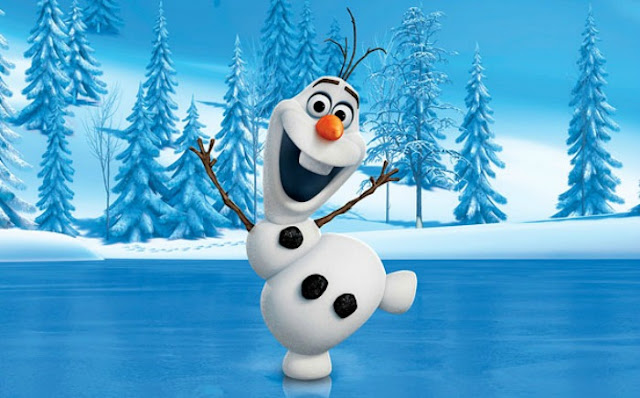 Example: Merry and Pippin (The Lord of the Rings trilogy) - Merry and Pippin are definitely the class clowns of the Fellowship of the Ring, but they also feel other emotions besides happiness. They feel grief for Gandalf and when they think Frodo has died. They feel anger when Boromir is killed and the Ents are refusing to help the world of men. They feel fear when they encounter the Nazgul and when they're taken by the Uruk-hai. They may be generally silly and fun, but they're also two little hobbits with depth and dimensions.

5.) Comic Relief Characters Need a Purpose Outside of Being Funny - Out of all of these tips, this one is probably the most important. A comic relief character's goal in life isn't to make some invisible audience out there laugh on occasion. These characters need to have goals and life ambitions of their own. They need to contribute to the plot and have importance to the cast.

Example: Ben Gunn (Treasure Planet) - Ben could have easily gotten annoying and turn out to be irrelevant to the plot, but he becomes essential to the escape from Treasure Planet. His memory is the key to figuring out Flint's destructive plan and making sure the team make it out alive. Not only that he is also a guide for Jim and the team through the island. Ben is funny, but he is also very useful to the plot. 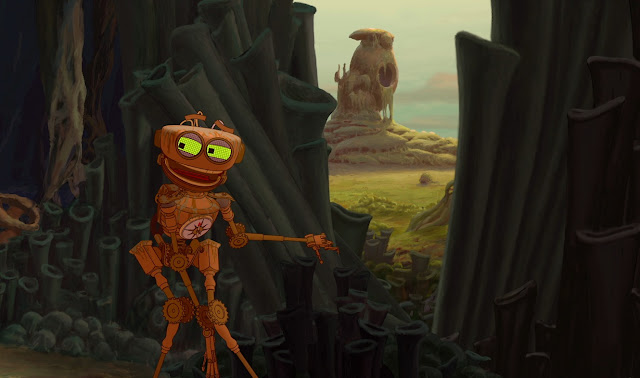 Example: Meyrin, Finny, & Bardroy (Black Butler) - At first this trio of the worst house staff ever seem like they're just there to create laugh sand show you how amazing Sebastian is as a butler. As the show went on I began to ask, "So why did Sebastian hire these three in the first place if they're so bad at their jobs?" It turns out that these three are all elite fighters and Sebastian hired them to protect Master Ciel. All of these characters were saved from very bad situations, so they have a deep devotion to Sebastian and Ciel from liberating them from their previous lives.

You may also like:
Elderly Characters 101
Antiheroes 101: What is an Antihero and How do you Write a Successful One?
How Drawing Can Help You Write
6 Questions to Ask Yourself if a Point of View is Necessary for Your Novel
Basing the Protagonist on Yourself: The Pros and Cons
Posted by Victoria Grace Howell at 1:00:00 PM