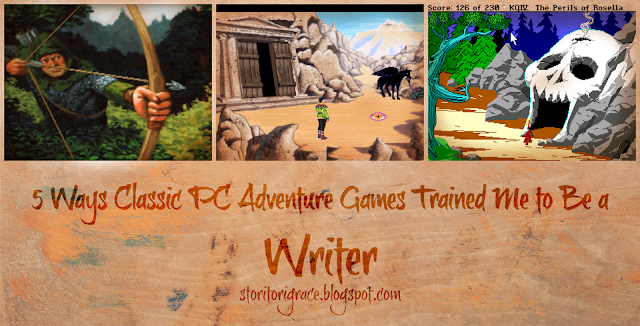 It's no secret that I freaking love PC Adventure Games. I've been playing them since I was seven-years-old. My mom had a lot of them on floppy disc. Yes, floppy disc. If you don't know what those are, look them up (It's also what your save icon is in Microsoft Word). XD Then later on with CD-ROM (Now we have snazzy disc-less download stuff. I'm so grateful for that.). So I have many fond memories get on our dinosaur of a computer in the office after finishing my schoolwork for the day and spending time with some of my pixel best friends. I wouldn't be the same writer I am today without the many skills I learned by playing these games.


1.) Typing - I can't tell you how many times I've had people comment on how fast I can type (80 words per minute when I'm booking it). Most of this is credited to the super old PC games where you have to type commands. My mom actually had me and my sister play these games as part of schoolwork to enhance our typing skills (Homeschooling for the win!) and let's just say typing with two fingers stopped really fast when the speed of your typing judges whether or not a rabid dog is going to eat you or Medusa is going to turn you into stone. Also, general gameplay is really slow with those games unless you have a decent typing speed.

2.) Spelling & Vocabulary - Growing up in any standardized tests my vocabulary and spelling were always college level and I credit my big vocabulary to Adventure PC games. The King's Quest games were originally marketed toward adults, not children because when computers first came out mostly only adults with higher education bought them because computers were a bit tricky to use. Thus much of the dialogue and narration had a lot of big words. Thus I often learned new words out of context or by looking them up in the dictionary.

Also back in the olden days, there wasn't a thing called autocorrect in the text boxes in Adventure Games so you had to spell your words correctly or the game couldn't comprehend what you were saying.

3.) Reading Comprehension - In the very old PC Adventure games, there weren't any voice-acted narrators and even in some newer games the narrator wasn't voice acted, so to know what's going on you had to have decent reading comprehension. I also learned how to read short bursts of text quickly because sometimes the timers were off and the text didn't linger too long. Understanding what was said can mean winning the game or not.

4.) Research - Most of the King's Quest games were based on mythology, fairy tales, and old poetry and rhymes, so having a knowledge of these was often essential to beating the games. This helped me fall in love with mythology and fairy tales and I loved researching the brief snippets of myth mentioned in the games. Back when I was a kid I didn't use Google very much so I mostly perused the library, but I feel like this also trained me for researching on the internet and gaining a knowledge of mythologies that have shaped our storytelling and even culture today.

5.) A Sense of Story Structure: What Worked and What Didn't - King's Quest, Space Quest, Conquest of Camelot, and others were pioneers of video games. They had their flaws because game makers were still learning about how to even make video games. I've noticed that the games that are easier to figure out are often ones with a more solid story structure. In some of the older games, I thought to myself, "What am I supposed to be doing?" because the gameplay didn't guide me toward the next task. The story didn't have a good flow.

A game that's too easy isn't fun. The King's Quest games have a myriad of obstacles that you have to conquer to accomplish the story goal. In King's Quest V, King Graham has to rescue his family from Mordrack but to do that he has to cross the mountains of Serenia but to do that he has to gain supplies to help him in his journey and get past that stupid snake in the middle of the road. You can't make it easy in novels either.

Conclusion - Seventeen years later and I'm still marathoning these games twice a year, they've made such an impact on me. Adventure PC Games have shaped me in so many different ways. I love how in King's Quest Valanice and Rosella weren't sexualized like female characters are often in video games, how Robin Hood is a character who cares for his men and for the needy, and how Quest for Camelot actually gives you points for helping others. They've inspired me as a person and a writer.