A Book Review of Ender's Game by Orson Scott Card

In order to develop a secure defense against a hostile alien race's next attack, government agencies breed child geniuses and train them as soldiers. A brilliant young boy, Andrew "Ender" Wiggin lives with his kind but distant parents, his sadistic brother Peter, and the person he loves more than anyone else, his sister Valentine. Peter and Valentine were candidates for the soldier-training program but didn't make the cut--young Ender is the Wiggin drafted to the orbiting Battle School for rigorous military training.

Ender's skills make him a leader in school and respected in the Battle Room, where children play at mock battles in zero gravity. Yet growing up in an artificial community of young soldiers, Ender suffers greatly from isolation, rivalry from his peers, pressure from the adult teachers, and an unsettling fear of the alien invaders. His psychological battles include loneliness, fear that he is becoming like the cruel brother he remembers and fanning the flames of devotion to his beloved sister.


Is Ender the general Earth needs? But Ender is not the only result of the genetic experiments. The war with the Buggers has been raging for a hundred years, and the quest for the perfect general has been underway for almost as long. Ender's two older siblings are every bit as unusual as he is but in very different ways. Between the three of them lie the abilities to remake a world. If the world survives, that is.
Series: The Ender Quintet (Book 1)
Genre: YA Science Fiction
Publisher: Tor Science Fiction (July 15, 1994)
Page Count: 352 pages

This is another story where I saw the movie first and so I knew about the big ending twist before. Some people I've spoken to say that may have hampered my enjoyment of the book, but I still wanted to read this classic.

The Plot: Though this is a relatively short book, the story spans over about six years of Ender's life. We get to watch him grow up which is both endearing but also heartbreaking to see what the military does to him as they try to turn him into a weapon for the greater good. If you don't know it's coming, the ending is certainly a huge twist and I know when I watched the film it came as quite a shock.

The Characters: The book starts when Ender is only six years old. This must have been a tough POV to write: a six-year-old genius, somehow who has a lot of knowledge but not a lot of experience. He's constantly afraid of becoming just like his sadist brother and I feel so bad for him because the military stole his childhood from him. He deals with crushing loneliness and insurmountable stress. I mostly felt bad for him throughout the book.

There's a diverse cast of other kids from France, Israel, Spain, the Netherlands, and even a Muslim kid from an undefined country. The legendary hero Mazer Rackham is half Maori. Graff is a very gruff character and I know that he's trying to save humanity, but I can't help but dislike him because of how he's manipulated Ender. His POV at the beginning of chapters though does make for an interesting underlying tension to the story that time is running out. Peter is just a crazy sadist, but I really like Valentine. her story is very interesting.

The Setting: Most of the book is set at the military base where Ender trains which is very creative what with its weightless battle rooms, but some of the book is set in Greensboro, NC (where I used to live!) and on an alien planet that the buggers temporarily colonized as well.

Epic Things: I think it's cool that Ender has Polish ancestry like me. Ender's strategy is also interesting as well, especially how he can see patterns and predictability.

The Theme: Loneliness and losing childhood are big themes.

Content Cautions: There's quite a bit of content. It was almost to the point of getting irritating. There are references to farts in some way almost constantly and other childish insults. There's a mention of genitals being displayed on a computer screen. There's quite a bit of violence including a broken arm, torn ear, broken nose, blood spraying, and references to sadistic animal torture. There is also a lot of profanity including twenty uses of ba****d, twelve uses of d****, twelve uses of a**, nine uses of h***, three uses of b****, three uses of sh**, one uses of a**hole, and one us of n****r.

What We Can Take Away For Our Writing:
The Effects of Stress on Characters - Longterm stress can be devastating to a person's health mentally and physically and Card shows this in how the kids are treated. Kids weren't meant to be ripped away from their family, not evening being able to communicate with him, and having their emotions suppress. A lot of the kids have gone crazy. Ender gets physically exhausted and moody because of all of the stress and when everything is finally over he sleeps for days.

How this can be applied to writing: Showing the effects of stress on characters is realistic and makes them seem more human.

Conclusion: I enjoyed the story, though I would have liked for there to be less content. 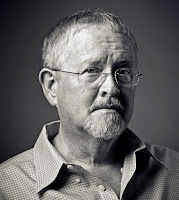 Orson Scott Card is the bestselling author best known for the classic Ender's Game, Ender's Shadow and other novels in the Ender universe. Most recently, he was awarded the 2008 Margaret A. Edwards Award for lifetime achievement in Young Adult literature, from the American Library Association. Card has written sixty-one books, assorted plays, comics, and essays and newspaper columns. His work has won multiple awards, including back-to-back wins of the Hugo and the Nebula Awards-the only author to have done so in consecutive years. His titles have also landed on 'best of' lists and been adopted by cities, universities, and libraries for reading programs. The Ender novels have inspired a Marvel Comics series, a forthcoming video game from Chair Entertainment, and pre-production on a film version. A highly anticipated The Authorized Ender Companion, written by Jake Black, is also forthcoming.The card offers writing workshops from time to time and occasionally teaches writing and literature at universities. Orson Scott Card currently lives with his family in Greensboro, NC.