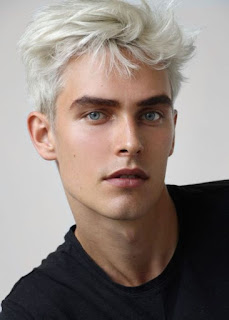 NaNoWriMo is coming and I'm going to be writing the third and final book of the Red Hood trilogy for it! Einer makes his first appearance in Silver Hood, but he has a big part in Black Hood, so I want to try to get to know him better! Here's a bit about him!

Einer is a twenty-two-year-old half Isamaour known as a halfura, born with the ability to manipulate matter. Because of his lineage, he was abandoned as a toddler and rescued by Lord Nzelt, the ruler of Isriki his country. For all of Einer's life he's been prepared to take Lord Nzelt's place when he eventually passes, but when Lord Nzelt finds a new protege named Claes, Einer is threatened that he'll lose his inheritance.

Because of his family's rejection, Einer has a severe distaste for humans and tries to ignore his soiled blood. He even hates speaking their language and prefers only to speak Isamaour, though he was taught to speak Silfurlundian as well. He is devoted to the Isriki religion which centers around the four Divine Siblings. Einer is very skilled in his abilities as an Isamaour and has become the unofficial leader of the other halfura taken in by Nzelt. He's tried to do everything he can to please Nzelt and be the protege he wants, but having him like Claes over him, breaks his heart.

Leave your questions in the comments or in the form if you'd wish to remain anonymous or if you're having trouble with the comments. Einer will answer them next Friday! Thank you!