So Your Character Has Chronic Fatigue Syndrome ... Featuring Maddie @ Stories and Spoons 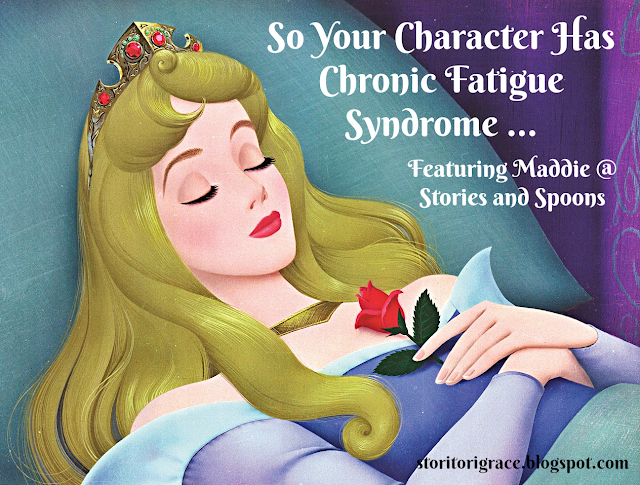 Maddie is back to share with us about having Chronic Fatigue Syndrome. Last she shared about living with Chronic Pain, so definitely check that out.

Hi! My name is Maddie and I’m 18 years old. I have Chronic Fatigue Syndrome and Chronic Pain. I am currently completing my Certificate 4 in Business and will be going to university to study History come August. I love to read, blog about reading and my life with chronic illnesses, and sew quilts in my spare time. I also love spending time with my golden retriever puppy and exploring new places when I can (especially places with lots of history).

How does Chronic Fatigue Syndrome physically feel? How do you think it compares to those who don’t have this?
Physically, Chronic Fatigue feels like there is a constant weight in my body. Like that feeling in dreams when you are trying to move but can’t because something is making it much harder to do. I also have this constant feeling of fatigue, which makes daily life much more difficult. It affects my head in what we call “brain fog”. This feeling is kind of like there’s a fog over all my thoughts, which makes it much harder to think and process things. I know some people have compared Chronic Fatigue to a normal person’s bad hangover (without having anything to drink), so it definitely makes us feel a lot different/worse than people who don’t have it.

How do you feel about having Chronic Fatigue Syndrome?
I think having Chronic Fatigue is kind of like this cycle of coping. Sometimes I’ll be managing okay and accepting my illness, and then I’ll stumble a bit and hit a point where I just feel like I can’t cope anymore. And then I’ll pick myself up, and then the cycle will start all over again. It’s a really sucky illness to have given how little people understand about it, and that makes it hard to accept sometimes.

What challenges does Chronic Fatigue Syndrome pose?
There are so many challenges that I’ve had to overcome with Chronic Fatigue Syndrome. I’ve had to learn not to do too much of certain things so that I don’t burn out faster. This applies to basic activities such as walking, getting ready in the morning, studying or going up steps. It’s challenging because sometimes I want to keep going with an activity, but I know that if I do, I’ll be worse for it the next day. I also get rather bad joint pain which is challenging to manage, especially when it’s flaring, and I often sit really weirdly to manage it.

Is there anything you like about having Chronic Fatigue Syndrome?
To be honest not really. It really isn’t fun having to manage fatigue and symptoms all the time. The only thing I would say is that it has made me much less judgy of other people. Because I know how invisible my illness looks from the outside, I’m much more tolerant of other people now because I have no idea what might be going on inside for them too.

Do you think your day differs from others because of Chronic Fatigue Syndrome?
My day definitely differs from other people’s. I’m constantly having to manage my symptoms and my days are often moderated so that I don’t do too much and have a ‘flare’. This often means that I can’t achieve all the things that I would like to in a day, because I only have a certain amount of energy to give before I wear out. Even things like washing my hair have to be carefully scheduled into my day so I don’t burn out. I also have to moderate how much studying I do, because after a while my brain fog gets really bad and I can’t concentrate at all. This means that when I’m studying I tend to do lots of short sessions so I don’t get too foggy.

Do you have any cultural differences between others who also have Chronic Fatigue Syndrome and those who do not?
Not exactly, although those of us with Chronic Illnesses on the internet have a bit of a community and support each other. There are quite a few ‘inside’ jokes around having a chronic illness, and people without one don’t tend to understand them.

What are some stereotypes about Chronic Fatigue Syndrome that irk you?
The biggest one for me would have to be that people just think it means I’m tired a lot, which isn’t even the half of it. People assume that if I go to bed, I’ll wake up and won’t feel tired anymore. This is so frustrating as it’s the kind of fatigue that never goes away, no matter how much I rest.

What media portrays Chronic Fatigue Syndrome well be it a movie, a book, or a TV show?
Like in the last question, I’ve never seen it represented so I couldn’t tell you. But if anyone knows of any media that does, I’d love to know!

Who are your top three favorite characters who have Chronic Fatigue Syndrome in books, movies, or shows?

I don’t know of any characters with Chronic Fatigue, but I am always on the lookout for them, especially in books.

Thank you again, Maddie, for your candidacy.