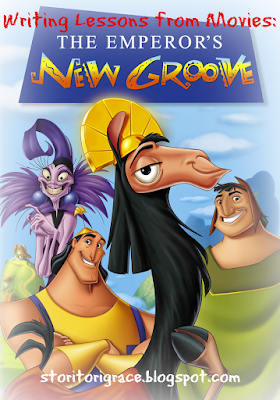 Ever since I saw this movie on VHS when I was a kid this has been the funniest Disney movie ever for me. To this day, I still laugh at the jokes as if it's the first time I've seen the movie and I feel like every time I watch it I discover some new joke I missed the last time I watched it. And while the movie is still hilarious, there are still moments that truly pull on the heartstrings, balancing roll on the floor comedy with meaningful lessons.

For those of you who haven't seen the movie, it's about a selfish spoiled young emperor who's usurped by his advisor by being turned into a llama. He and a kind peasant journey through the Peruvian jungle to find their way home.

1.) A Main Character Who's So Much of A Jerk That You're Actually a Bit on the Villain's Side - Emperor Kuzco is a terrible person. He doesn't care about anyone but himself and he's cruel, sarcastic, and rude to others. This is evident in just the first few minutes of the film as Kuzco throws an old man out the window just because he got in his way and he wants to wipe out a whole village to make room for his pool house. He has no business ruling.

When the royal advisor Yzma vents her frustrations to Kronk after being fired for sitting on Kuzco's throne, you kinda get why she wants to get rid of him. Maybe she'd even be a better ruler than this guy who just cares about all the things he gets being royal and not taking care of his people.

How this can be applied to writing: This can be a good thing and a bad thing in a story. For the Emperor's New Groove it works because you can empathize with the villain, though later on you see her full true colors and gravitate to the main character's side as he begins to change for the better. Keep in mind making your villain more likable and/or empathetic than the main character or readers could want your main character to lose.

2.) A Side Character that Makes the Main Character's Journey More Palatable - Pacha is a very likable character. He's a kind simple man who wants what's best for his family and his village. His goal is pure and his heart is so pure that he believes that there's good even in someone as bratty as Kuzco. That doesn't mean he never gets angry or frustrated with Kuzco, but he genuinely wants to be open.

When the two of them are stuck in the dangerous jungle full of panthers and scorpions, all Kuzco wants to do is go home so he can resume his hedonistic life, but Pacha wants to go home to take care of his expecting wife and two young children. Pacha's goal helps motivate us to keep enjoying the story despite Kuzco's behavior and give us enough patience to finally see Kuzco become a better man.


How this can be applied to writing: Having a more likable side character can make a first unlikable character's journey more bearable. It buys the audience's patience because they at least want to see if the side character is going to make it to their goal.


3.) An Outwardly Stupid Character Being Smarter Than He Looks - Kronk is one of the best henchmen ever and his personality is very unexpected. At the beginning of the film, he looks like the typical dumb villain henchmen but as the movie goes he actually shows a lot of intelligence that is essential to Yzma's endeavors.

He's really good at cooking (Gotta love them spinach puffs), he speaks squirrel (Squeaker squeakety), he's into bird watching (That's another one for exotic bird bingo!), and he even puts together that Pacha was the one in disguise at the restaurant when Yzma didn't even figure that out which leads Kronk and Yzma to Pacha's house to intercept our heroes. Yes, he can be silly and he's not that smart socially a lot of the times, but that doesn't mean that he's a complete idiot.

How this can be applied to writing: Disney followed the longstanding trope of idiotic henchmen for a long time (Jasper and Horace from 101 Dalmatians and Creeper from The Black Cauldron), but it was refreshing to have such a fun and lovable henchmen such as Kronk.

4.) Young and More Mature Humor - One of the reasons why The Emperor's New Groove is so timeless is there are jokes for both kids and adults--and the typical kid's film potty humor is nonexistent. There's plenty of slapstick humor for children such as when Kuzco and Pacha get into a fistfight, Yzma is turned into a pinata, and Yzma is smacked around as a cat. But there's also more subtle humor for adults without straying into too mature for its audience such as when Yzma says, "But just to save on postage, I'll poison him with this!" or:

Kuzco: Okay, I admit it. Maybe I wasn't as nice as I should have been. But, Yzma, do you really want to kill me?
Yzma: Just think of it as you're being let go, that your life's going in a different direction, that your body's part of a permanent outplacement.
Kronk: Hey, that's kinda like what he said to you when you got fired.

Yzma: I know. It's called a "cruel irony", like my dependence on you.

How this can be applied to writing: Even when writing middle grade there's nothing wrong with adding more mature appropriate jokes and hey a lot of kids are smarter than you think they are and they could find it hilarious.

5.) Breaking the Fourth Wall - Breaking the fourth wall is when the characters are completely aware that they're in a movie and being watched by other people Kuzco is our narrator in The Emperor's New Groove, putting it in Kuzco's POV for the most part. Kuzco pauses the movie to tell the audience that the story is about him not Pacha with the use of a big red marker and at another point, the Kuzco in the story even talks to the Kuzco narrator. This has hilarious results. 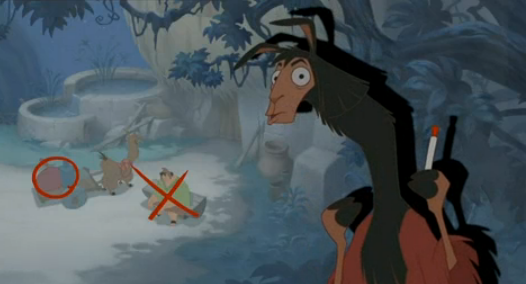 How this can be applied to writing: This is a technique used sparingly and mostly for comedy. Deadpool does this in both his movies and comics. The Muppets are notorious for it in their movies.

Rizzo: You sure this isn't too scary for the kids?
Gonzo: Nah this is culture.

Max in James Patterson's Maximum Ride series (YA Science Fiction Thriller) does this as well since she's completely aware she's telling this story to an audience and will often make comments to the audience about things. Many times this technique is considered taboo since it can shatter the audience's suspension of belief but used correctly and it can have amazing results. 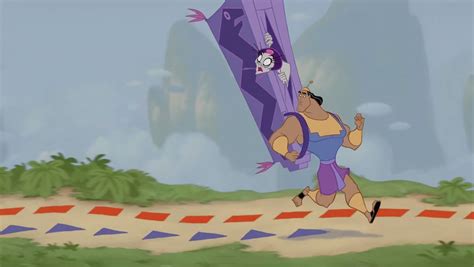 Have you seen The Emperor's New Groove? Have you noticed these writing aspects? What movies have you noticed have good writing? Let's geek out together!