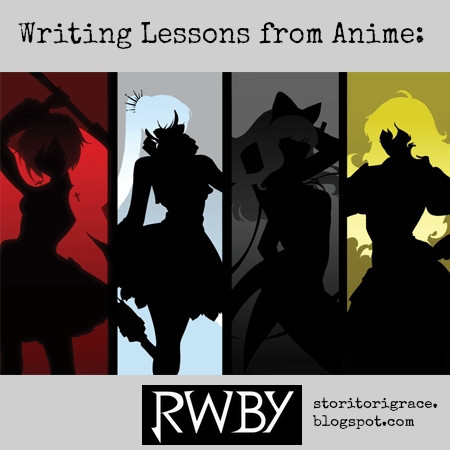 Two years ago I watched RWBY (pronounced "Ruby." Yes that confused me at first. In Celtic W can actually be a vowel. Google it.) soon after its release upon hearing my friends go ape over the show and they did for good reason.

If you haven't heard of RWBY it's an clean, American-made, fantasy anime done by the indie company Rooster Teeth and it's fantastic. You can watch all of the episodes free on their site or their YouTube channel (watch all the Red, White, Yellow, and Black trailers. They have little exclusive back story for the show plus they're epic). While watching the show, I've noticed some good writing aspects I wanted to share (plus I want to promote this awesome show).


1.) Each Character is Memorable - RWBY has a large cast of characters. Four main characters plus four other main students are focused on and that doesn't include the teachers, antagonists, and other side characters. With such a large cast each character must be unique or they'll get lost among the others. The group naming not only is a really cool idea, but also provides a way to remember the characters: RWBY (Ruby, Weiss, Blake, Yang) and JNPR (Jaune, Nora, Pyrrha, Ren; pronounced Juniper).

Each character has a defined personality: Ruby is peppy and the youngest; Blake is solemn and a loner; Weiss is crabby and a bit of snob; and Yang is optimistic and rebellious. The costume colors also help you remember each character: Ruby is Red; Weiss is White; Blake is Black; and Yang is Yellow. Not only does this provide an artistic aesthetic, but it makes sure you can pick each one out in this large cast.


How this can be applied to writing: Are each of your characters diverse and memorable? Can you describe their personality in three words? Is each personality different than the others? How about their visual aspects? Are they visually different than each other both in costumes and physicality? These are things you must think about to make sure names aren't confused or they all look the same or they are all clones of the same character.

2.) Each Character has their Own Problems and Goals - Not all of the side characters agree with Ruby and what she wants to do. Though the students strive to be hunters like her, they go about it differently and want to be one for different reasons. One episode explores each of Ruby's, Weiss's, Blake's, and Yang's true meanings for wanting to be huntresses. In it, you see the even deeper motivations for each. (If want to find out, you must watch the show. ;) )

All of them have problems. Ruby is looked down on because she's younger. Weiss has familial pressure. Blake has a dark past. Yang has had dealings with shady characters. Jaune is weaker than the other students and is ashamed of it.

3.) They Broke Cliches - The biggest point about RWBY is that the show turned a ton of cliches on their heads. For example, the students are in college instead of high school. The main male and female characters actually aren't in love. The popular girl Pyrrha isn't a jerk and actually fears her popularity because it alienates her from other people because they think she's out of their league. There are others too, but many are major spoilers.


How this can be applied to writing: Keep in mind about cliches such as the orphan hero. If you can turn them on their head do so. If you use a cliche, use it in a way that's unique or even lampshade the trope.

RWBY's such an amazing show with good writing! It's funny and clean and just all around epic. If you haven't seen it, watch it! The first season is only about two hours long and you can see it free--legally. XD I've also reviewed the RWBY Adagio Tea blends, Ruby Rose, Weiss Schnee, Blake Belladonna, and Yang Xiao Long, so if you want to sip some tea while binge-watching this anime, these are the way to go. Studying shows, movies, and books are great ways to improve writing! If anything watch this show for a lesson. ;)

Have you seen this show? Who's your favorite character? Are there any writing learning points I missed? Let's geek out together.