Third Bloggy Birthday Bash: Opening and Blast to the Past! 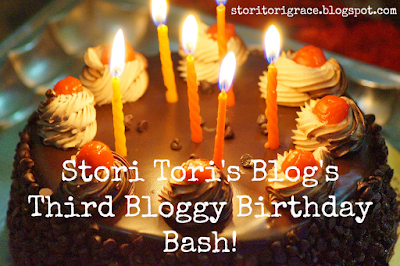 Today is the blog's third birthday! *pops streamer* For some unknown reason, I've never celebrated my blog's birthday. It's deprived. *pets blog* So this is my first time doing a blog celebration and I hope you guys like it!


To divide up the celebratory activities instead of one long post I'm going to post one every hour. Here's the schedule!

As you can see in the schedule the Blast to the Past post is now! I want to take this time to reflect a bit on the history of the blog. I've written a post that talks about the origin of the blog in detail so I'll keep this brief and add something new to shake things up.

I started this blog shortly after joining the Go Teen Writers Facebook group in 2012. So many other girls my age were doing it so I thought what the heck and it will help build up my author platform. I had no idea how much discipline and creativity it took. During the first year or so, I got discouraged and quit for a while, because I had no clue what I was doing, but starting in late 2014, I decided I'm going to really try to get this blog going.

Since January 2015 I haven't missed a post and now I get several comments a week; across Google+, blogger, and Blog Lovin I have about a hundred followers; I post five times a week; and get about 2000 views a month. I've come a long way from maybe one post a month and it keeps on growing. It's really awesome to see hard work paying off.

I thought I'd show off some of my old posts to get them some love. I'm hoping to revamp them in the coming weeks!

Top Nine Posts of All Time (Because Blogger Only Shows Nine instead of Ten like a Normal Person):

1.) How to Write A Good Character Interview - It stands to be my most popular post with over 500 views. It's one of the shortest I've written and it doesn't have a single comment yet it is somehow the biggest. XD

2.) What Anime Can Teach Us About Writing - This is one of my favorite posts I've ever written. I still get comments on it today!

4.) An Interview with Author Bryan Davis - Bryan Davis has always meant a lot to me in my writing journey and it was an honor interviewing him.

5.) How to Write a 3D Villain Part 2 - This is one of my old favorites about villains. I feel pretty proud of this post.

7.) The Art of Characters: Protagonists - A link-up I tried that crashed and burned. XD

8.) Dear Christian Writers ... - Another one of my favorite posts about some flaws I've found in Christian media.


My First Post - Interview with Bryce (Subsapien) - An interview with my favorite character I've ever created.

Well, those are the posts! Stay tuned for the giveaway post coming in one hour!

Have you read any of these posts? Do you blog? How long have you been blogging? What's your favorite blog posts you've ever written? If you blog, post the link in the comments so I can check it out!