A Book Review of Steelheart by Brandon Sanderson

How far would you go for revenge if someone killed your father?

If someone destroyed your city?

If everything you ever loved was taken from you?

David Charleston will go to any lengths to stop Steelheart. But to exact revenge in Steelheart’s world, David will need the Reckoners—a shadowy group of rebels bent on maintaining justice.

And it turns out that the Reckoners might just need David too.

I've been hearing for years about the brilliance of Brandon Sanderson, so I put his name on the top of my list of the books I wanted to get after I finished reading all of the ones I already owned. Now I finally got to read it and though he didn't capture me as much as I'd hoped, I enjoyed his work.

The Plot: The plot is very action-packed with a lot of missions, guns, fights, and superpowers. Being a big fan of super powers, I enjoyed this a lot. It is a revenge story, but it does turn out well--unlike some other ones I'm thinking of right now. There are a lot of greats especially near the end. They come in a barrage. As soon as you recover from one another one hits. I guessed some of the twists, but most surprised me. The action and resting points were well-balanced, keeping you interested while still giving you time to breathe. I like all the strategy put into the missions. There's a lot of detail many books don't go into. Between Cody's humor and David's metaphors, there's some good levity to keep the book from getting too heavy.

The Characters: David is a very interesting main character. His tendency for terrible metaphors is pretty funny. He's also determined, brave, smart, and persistent, but also obsessive which was interesting seeing in such a young character. He knows just about everything there is to know about Epics.

The Reckoners: Prof, Tia, Megan, Abraham, and Cody are interesting bunch. I like their variety. Prof is a troubled man, Tia is a smart tech, Megan is a kick-butt blond, Abraham is a wise French Canadian, and Cody is Southern with Scottish roots and a very special guy. I liked Abraham and Cody the most since they were the most distinctive. Cody says the most outrageous things that had me smiling, but I also enjoyed Abraham's subtle personality.

The Epics are certainly different. They're nearly invincible which reminded me a bit of the Titans in Attack on Titan. Their powers and weaknesses are very unique and interesting, especially Nightwielder, Conflux, and Firefight. Though you don't see Steelheart very much, he's certainly a formidable villain.

The Setting: The world is very thought out. The entire book takes place in the city of Newcago which is Chicago covered in steel. The world has changed because of Epics. They practically rule the planet since Calamity showed up. Lots of interesting slang has developed such as "calamity," "sparks," and "slontze." Steelheart acquires smart children for his upper cities. I also thought it was a neat thing to add about old people complaining about some of the new cultural acceptances of the day. It's definitely an overall dark and dismal world, one that obviously needs to change.

Epic Things: Well the book does have beings called Epics so ... there has to be some epicness involved. Nightwielder's abilities are my favorite out of the Epics. His were the most terrifying. A lot of the gadgetry is very epic including the tensors (devices used to erode inorganic material).

The Theme: I think one of the biggest themes in this book was courage, but also being courageous with wisdom. These are some of my favorite lines that point toward that theme.

"Don't just act because you can; act because it's the right thing to do. If you keep that in mind, you'll be all right." Prof (Steelheart, Brandon Sanderson)

"Sometimes, son, you have to help the heroes along." David's Father (Steelheart, Brandon Sanderson)


Content Cautions: Since this is an action novel, there is a quite a bit of action. The most bothersome to me was at the beginning when an Epic called Deathpoint was turning people in skeletons. That was really freaky. It's mentioned that an Epic called Fortuity reads fortunes using people's entrails. Characters are wounded by being shot or stabbed. There is some swearing. I counted five uses of h*** and three uses of d***.

1.) Prologue Works - The book begins with a prologue of right before the Epics took over and David witnessed the great Epic Steelheart bleed. This turns out to be a key point of the entire book. It's an important bit of backstory that took place year before the book begins that carries throughout the story. It's why David is so bound and determined to killed Steelheart. It's why the Reckoners eventually accept David onto their team. The scene is crucial.

How this can be applied to writing: Prologues are often excuses to dump information that isn't needed. Many times a prologue can be cut out of a story or moved to chapter one. The prologue in Steelheart is absolutely essential for the rest of the story and needed to be told upfront. When writing a prologue ask yourself if it is truly essential for the rest of the story to work or can it be cut.

2.) Naming of Ages - Because the coming of the epics was such a world shaking, the dates have been changed to suit that. Instead of B.C. (Before Christ) and A.D. (After Death), we now have A.C. (After Calamity). I thought that was an interesting touch to show exactly the magnitude of this event.

How this can be applied to writing: Have you thought of naming ages of your story? Do they have an abbreviation? Are they named after an events?

3.) The Accents Could Have Been Better - The one thing that irritated me about this book was something I spoke about in my Miss Peregrine's review: I forgot about the accents. Cody has a distinctive Southern accent that he's intermixed with Australian and Scottish. Abraham has a light French Canadian accent, but instead of changing the words of their dialogue a bit to remind of us of this, Sanderson kept mentioning the accents in the dialogue tags.

Though this works fine, it feels repetitive, but at the same time not done enough. I kept forgetting to read Abraham and Cody in their accents in my head. The only indications of accents were sometimes in Cody's dialogue he said "y'all" or "lad" or "lass" or "mate," but not very often. If he'd changed more in their dialogue instead of in their tags without overplaying it, I feel like their accents would have been conveyed much better.

How this can be applied to writing: Accents are tricky, so tricky I may write a post all about them, but if you don't change your character's dialogue even slightly your readers can and will forget the fact that your characters have accents.

Conclusion: Steelheart was an enjoyable novel. I was hooked and had fun reading it. Four stars! 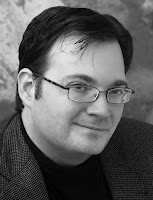 Brandon Sanderson was born in 1975 in Lincoln, Nebraska. As a child Brandon enjoyed reading, but he lost interest in the types of titles often suggested to him, and by junior high he never cracked a book if he could help it. This changed when an eighth grade teacher gave him Dragonsbane by Barbara Hambly. Currently living in Utah with his wife and children, Brandon teaches creative writing at Brigham Young University.
Website // Facebook // Twitter // Goodreads