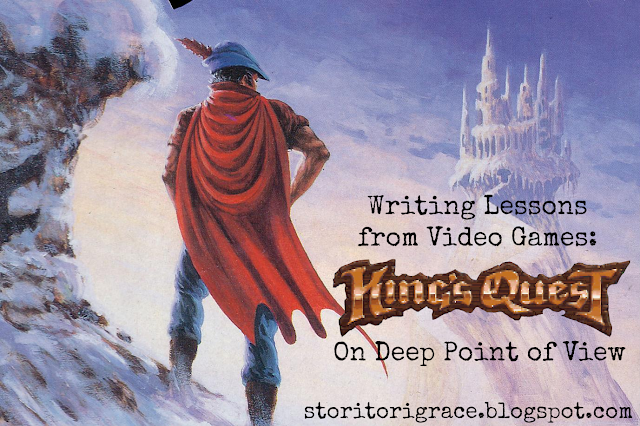 King's Quest is a classic video game series that began in 1983 continuing into eight games with a remake series that will be a total five episodes (I'll be focusing on the originals, because they're better than the remakes). In each game, the main character ventures on an epic quest through the lands of Daventry, Kolyma, Llewdor, Tamir, Serenia, the Green Isles, Eldritch, and more. He or she meets characters such as a witch living in a gingerbread house, a vampire count, Medusa, a giant whale, gypsies, and even Samhain the Lord of the Dead. They games have become so popular that fans even remade the older three games with better graphics and created a ninth game to tie up the storylines.

This epic series inspired me as a child. After school and on weekends, I would play these amazing stories, overjoyed that I could interact with my favorite fairy tale and legendary characters. I forgot that I was the beanpole shy blond and for a few hours I was the wise King Graham, the clever Prince Alexander, the brave Princess Rosella, or the steadfast Connor. Playing these games was like playing a novel. I've completed a lot of video games and I've never felt the exact same immersive experience as I have in these nine games. A few weeks ago, after replaying the first three games, I seriously pondered about the why. Why do these games stand out among Super Mario, Skyrim, the Legend of Zelda, Croc, and more to me?

It's because of the narration.

With the exception of King's Quest VII and VIII, each of these games has a narrator. This narrator alerts you to the internal feelings of the character you're playing. Most video games don't have this. You see and hear what is going on in the game, but you don't feel like in the King's Quest series. I believe this is the magic of my favorite childhood PC games, and I'm going to show you how you can apply this magic to your stories.

1.) It's Not All About What You Can See and Hear - King's Quest was made in a time when graphics were very limited. Sierra and even the fan groups who've remade the games didn't have the computer capacity or the budget to make games with exceedingly detailed and realistic graphics like in Skyrim or Assassin's Creed. Though VGA graphics can allow some beautiful artwork, there are still limitations that the narrator had to often describe. The game didn't rely on visually impressive graphics to hook you to the story, it relied more on story and the closeness you have to your playing character.

How this can be applied to writing: Beautiful prose can be impressive, but lovely visual and audible description does not a good story make. Don't get me wrong it enhances the experience and is necessary, but often what brings us closest to a character is the things we can't see and hear. I can be standing next to someone and seeing and hearing the same thing they are, but I can't always be feeling the things I've listed below.

2.) Touch - Touch is an intimate action. The narrator often describes the exact feeling of what you're touching. For example in King's Quest one while you're searching in a stump. See the pictures below. 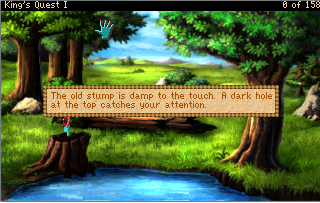 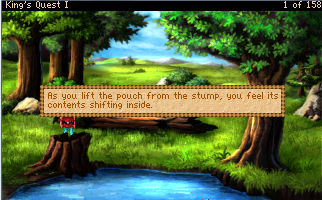 The King's Quest games are narrated in second or third person and knowing what things feel like even if it's a stump or the chill of the cold mountains or hot water of an enchanted spring. Often there are better ways to phrase this description than what these games do, but the principal is still there.

How this can be applied to writing: Pay attention to describing what the characters are touching. Is the wood rough or smooth? Is the water hot or cold? Is the dog's fur soft or matted?

3.) Internal Sensations - There are many sensations we can't feel with our hands such as hunger, exhaustion, and even hanging to use the bathroom. The narrator often points out if you're feeling hungry or tired or cold and you'll often have to do something about it or suffer the consequences. For example this excerpt from King's Quest V:

Graham notices his stomach beginning to rumble with hunger from his exertion from the mountain climb.

How this can be applied to writing: Mentioning natural internal sensations like this bring you even closer to the main character. I've seen authors often forget simple things and I've though, "Do these characters ever eat or sleep? Are they human?!" Your readers will empathize with your characters more when your characters feel hot or thirsty just like they do.

4.) Smell - Many times the narrator mentions the salty air or the pungent scent of sulfur or like in the example below a smelly rotting fish. Mentioning smells brings you so much closer into the games. Like I've mentioned, it's like reading a good book when you can smell what the characters your playing as are smell. You feel right into the story.

How this can be applied to writing: A good writer knows the powers of smell. The olfactory part of your brain is bound closer to memories than any other part. I know when I smell certain scents I'm zipped back to fond or bad memories. When I smell certain foods, I think of my grandparents. When I smelled burnt plastic, I thought of my car accident to the point it actually triggered a flash back. Smells are powerful things.

5.) Thoughts - The narrator also mentions what the character is thinking. He will mention how Graham's heart is breaking for his family, how Rosella longs to be home to her family, or how Alexander feels lonely while he's locked away by the evil wizard. Here's an example from King's Quest VI where Alexander is finally making contact with his lover:

How this can be applied to writing: Thoughts are one of the closest ways you can be to a character. Hearing directly from their heads lets you know how they truly feel about a situation. Often we put on personas to hide what we feel, but our thoughts bare all. Don't forget to include thought processes so your readers can follow along with why your character is acting that way and what do they really think about situations.

6.) Instincts - Lastly, King's Quest keeps in mind instincts and pseudo sensations like the feeling of being watched or having a bad feeling about a person or the air of death like in this example. 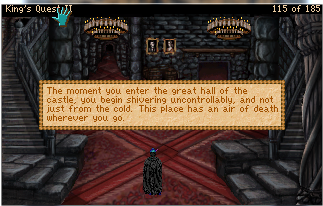 How this can be applied to writing: We have natural instincts that tell us if things are unsafe or not. Whether we listen to these things is up to our discretion. But including them also brings yet even closer to the POV character.

Conclusion - The King's Quest series was so powerful to me as a child that it actually inspired me to write. I wanted to be able to write characters that you could feel like you're really inside. I wanted to write stories that captured me like King's Quest did. If you haven't played this excellent series I strongly encourage you to play the first three games which you can play free via the site the fans who remade them post them on. If you like those, show support and buy the full series! They're such amazing games and they need more hype. I hope they can teach you lessons like they taught me. Thanks for reading!