When I think of someone who's high and mighty or in this case Chai & Mighty, I can't help of our beloved clodpole King Arthur from BBC's Merlin, hence why today's Writerly bundle is Merlin themed!

Example Sentence: At the beginning of the Merlin series, Arthur doesn't have very much sophrosyne.

Though this soundtrack is a bit to a rough start for Merlin because of low budget, it really blossoms over time. The fourth season has my favorite pieces. This particular track is very fantastical with its harp and tinkling sounds. It has a mystical pensive feeling throughout that escalates near the end with a vocal and instrumental fanfare. This piece is good for a scene with a bit of magic and bit of tension. I'd recommend listening to this while writing a good fantasy. 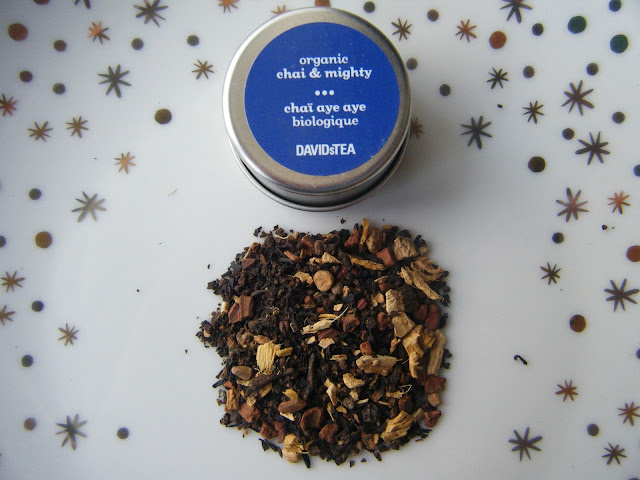 In India, spiced chais are a big part of everyday life. Recipes vary from region to region and from household to household, with every family fiercely protecting their secret formulas. And after trying dozens of different spice blends, David finally found his perfect, signature mix. He started with a rich black tea base and blended in a spicy combo of cinnamon, ginger, cardamom, cloves and black pepper. Then he added a touch of sweetness from licorice root and vanilla. The best part? It’s certified organic. We told you it was perfect…

The Tea: Surprisingly the first time I had ever tried a chai tea, I hated it. I don't know what was wrong with me. Now chais are some of my favorite types of tea and this one definitely fits in this category.

The loose leaf tea has a strong spice smell of cinnamon, ginger, cardamom, and clove. When you brew the tea it is a light brown with a strong vanilla flavor with the complexity of black pepper along with the other spices and a hint of licorice. However, this tea isn't as spicy in temperature as some of the other DavidsTeas I've had are. The tea is strong, pronounced, and overall a very unique chai. I've tried many different chais at this point and this one is distinct in its own way.

This is a great tea to wake you up in the morning and have some cookies before you go about your chai and mighty princely duties. ;)

Serving Recommendations: I steeped this tea at 204 F for five minutes and added sugar, cream, and a pinch of cinnamon and cardamom.

How much is it and where can you get it? You can buy this tea at a DAVIDsTEA store or on their website. You can get just Chai & Mighty for $7.90-$79.00, depending on how much you get. The smallest amount is 2 oz. and the largest amount is 20 oz. You can also get Chai & Mighty along with five other teas in the Super Spice set (which is what I did) for only $14.00.

So how good is it?